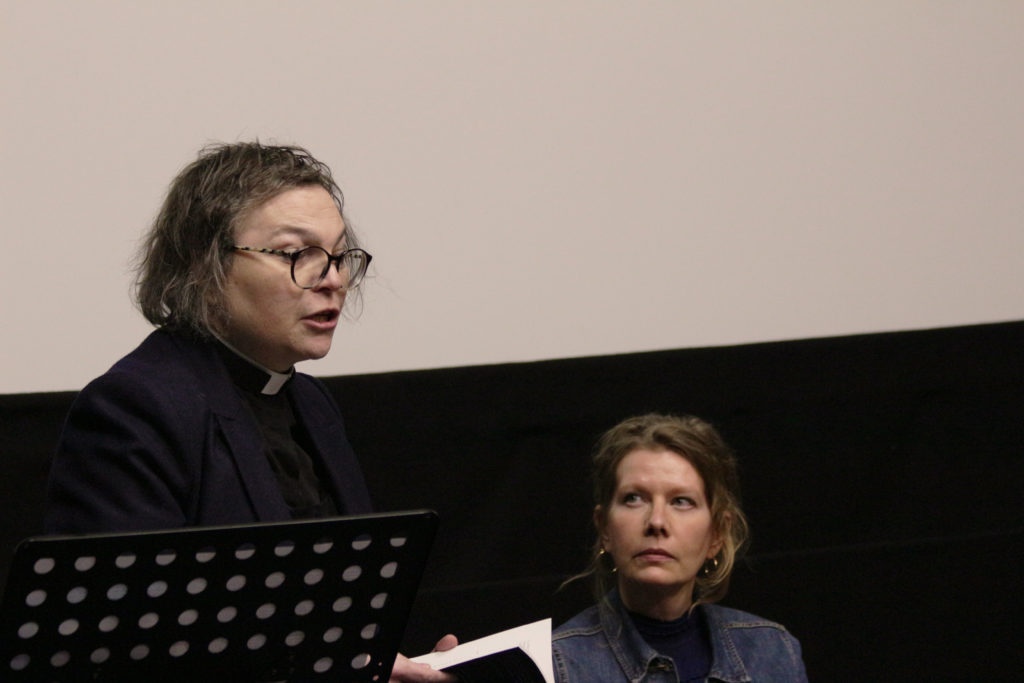 Rachel Mann and Karen Solie discussed their poetry and ideas of faith and devotion as part of the latest Writers at Manchester Met series.

Opening the event at Manchester Met, Andrew McMillan said: ”I always thought my own religion would be poetry and my church would be evenings like this.”

McMillan, an award-winning author, poet and lecturer at Manchester Met introduced the discussion, which invited Mann and Solie to discuss their faith’s relationship to their work.

Solie, a Canadian poet and a lecturer at Manchester Met who has been shortlisted for the T. S. Eliot Prize, describes herself as a “non-believer” and says even a non-believer precludes the sense of ‘sacred’.

Mann is an Anglican priest, poet and a broadcaster who introduced her debut collection, Kingdom of Love. She is a visiting teaching fellow at the Manchester Writing School and her research interests include sexuality, queer theory and “the intersections between feminism, trans identity and poetic performance”.

Before reading from her debut collection of poetry, Mann described A Kingdom of Love as an “extended meditation” on what it means to be a priest in a world today.

She joked, ”This feels like a proper congregation where it’s filled up from the back so people don’t get too close to the priests – or the poets.”

Solie opened her own reading with a description of an inspirational, yet not a well-known figure of Saint Ethernan. The Scottish saint who had to survive “on bread and butter”, inspired Solie to centre her book around him.

Solie said: ‘That idea of someone alone under physical and emotional duress in a crisis of faith trying to make a decision really compelled me.”

After the readings, the discussion followed McMillan’s questioning of the ways in which “faith and poetry are in conversation with each other”.

”The thing about poetry that excites me is its precariousness, it’s riskiness – it’s always on the edge of falling apart,” Mann said.

“Poetry for me is wrestling with language in form and rhythm and it’s just so readily falls apart. I think that’s where God is for me – in the falling apart.”

Although identifying as non-religious, Solie said she felt much same about the connection between religion and poetry.

”Even being a non-believer precludes worship. All of the richness of being human. It has fascinated me for a long time not having thought of myself as a Catholic,” she said.

As well as notions of faith and devotion, other philosophical aspects in regards to poetry were discussed including the fragility of time.

“When you really notice something, it’s that it is transient. That it will be gone. That I – as the perceiver – will be gone. I find comfort in that in a strange way – the sense of temporary,” Solie said.

Talking to aAh! Magazine after the event, Mann said it was one of the most remarkable events she has been involved in. She noted the intimacy of Manchester Met’s cinema basement venue and the way the place held the sound.

She added: ”It felt like a congregation gathered around an altar of poetry.”

The audience agreed, stating the discussion brought an interesting perspective of faith. A recent Manchester Met graduate said he realised all arts are a manifestation of ‘divine’.

He said: “You don’t have to say ‘I’m a person of faith and I write from that impulse. It’s all about transcendence and making a connection with something beyond us.”