You are here: Home / Culture / Manchester / Music / Live Review: The 1975 and Beabadoobee Take on the World at Manchester Arena 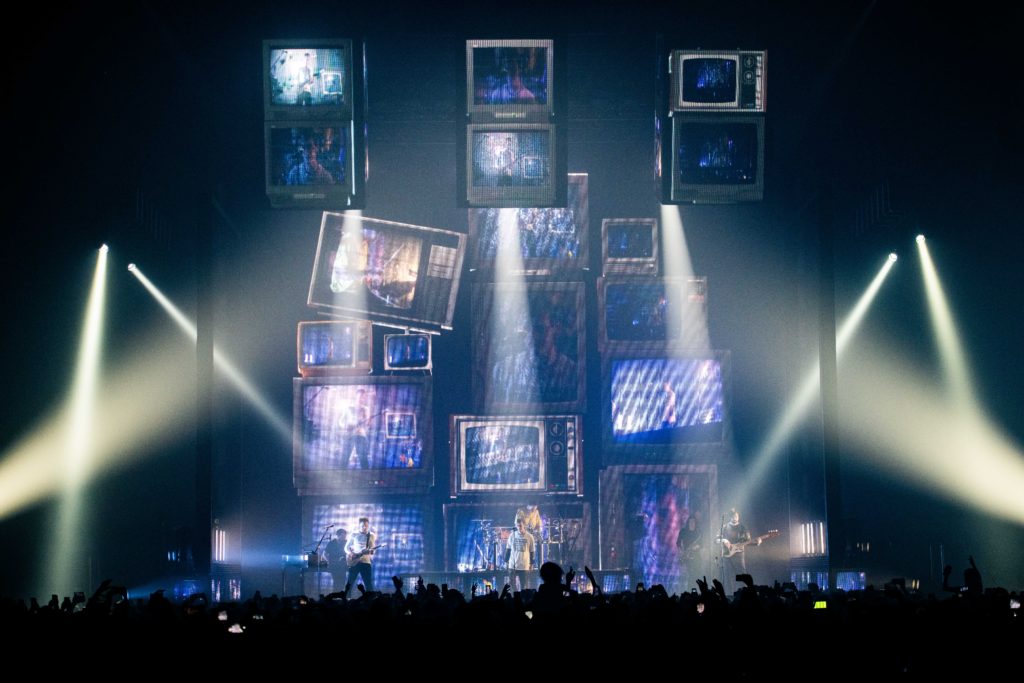 The sheer size of Manchester Arena isn’t for the fainthearted. Headlining rock-pop veterans The 1975 have tackled this beast successfully many times. However, for opening act grunge-pop artist Beabadoobee a.k.a Bea Kristi, it’d be easy to assume the venue was a daunting prospect.

However, the newest Dirty Hit label frontrunner not only completed it but did so in style too. The gig was supposed to have been part of The 1975’s Notes On A Conditional Form tour but due to a delay on the album, was subsequently renamed Music For Cars. Clear from the new tracks showcased on the night, it will surely be worth the wait. This was to be anything but a washed-up version of last year’s A Brief Inquiry Into Online Relationships tour, but an exciting extravaganza. It even featured dancers and a saxophonist to boot.

The last time the singer-songwriter Kristi performed in Manchester was at Gorilla, as part of The Dirty Hit Tour with Label mates Oscar Lang and No Rome. During her set, she stated that she’s “19 and terrified but this is crazy, it’s cool though”. Most musicians her age would kill for an opportunity like this. She’s already toured the world, met her idol Stephen Malkmus and signed with Dirty Hit records. However, it hasn’t come without hard work and is a true testament to her talent.

The pint-sized powerhouse instantly commanded the arena with her first track of the night ‘Are You Sure’ from her latest EP Space Cadet. The bass and drums echoed to the back, and a single spotlight prompted the notion that it wouldn’t be long before Kristi headlines arenas of her own with her attention-grabbing sound.

A track inspired by and dedicated to her idol frontman of 90s band Pavement, ‘I Wish I Was Stephen Malkmus’ was a quintessential grunge-pop number, featuring an amped-up guitar solo. The pink and blue lights flashed in tandem with the bass and vocals, taking full advantage of the visual offerings of the arena.

Not one to completely abandon her roots of beautifully penned lyrics with a stripped back overlay, her next track ‘Angel’ was hard-hitting and moving, as she sang “Your bones are only painted gold/That’s why it rots beneath your soul”. It built up with every drumbeat, adding to the already palpable atmosphere.

The title track from Kristi’s Space Cadet EP saw phone lights twinkling in the darkness, transporting us to Kristi’s world, as she sang “Through the Milky Way” and “Pluto is Light years away” a literal expedition as we were transported to another dimension.

Last track ‘She Plays Bass’ was a testament to female musicians, as she said it was about “How it feels to go on stage, we need möre women f*** it”. It featured the best instrumentals of the night, and the zooming in of the screen showed Kristi’s skill in particular. A clear inspiration for women to pick up a guitar, Kristi only picked up a guitar a few years ago after transitioning from the violin. As the lights faded you’d have been forgiven for thinking that the show was over.

However, as she shouted “1-2-3-4”, the band launched into their final attack, shocking crowd members with some of them even jumping out of their seats. The band ended on a high and with their snowballing success, should be getting used to these arena level shows.

The 1975 has long become synonymous with extraordinary sound, exciting visuals and a frontman who consistently commands every show as if it is his last. Despite undergoing a slight accident to his foot before the show, in true Matty Healy style the vocalist took to the stage by intermittently using crutches. Nothing was going to spoil the band’s revival of some of their best-known hits such as ‘Chocolate’ or ‘The Sound’ as well as the exciting sound of their next chapter such as ‘The Birthday Party’ or their stellar unreleased track ‘Guys’.

Opening the set with ‘People’ was a literal way of getting the audience to “WAKE UP! WAKE UP!” as the first notes rang out. The lights flickered and the crowd cheered as the band powered up the arena.

The 1975 has long become synonymous with extraordinary sound, exciting visuals and a frontman who consistently commands every show as if it is his last

It was already duly noted that The 1975 were planning on using their expansive platform to discuss current topical matters.“People Like People” appeared on the screen in rainbow font. This leading track from their fourth studio album is a call to arms for the future of our species.

New unreleased tracks also proved how The 1975 aren’t a band to stick to a single genre. Song ‘Guys’ which featured a video made of the slightly dorky boys we have come to love, and an indication of how far they have come. All encompassed alongside a heartfelt, nostalgic bop. The other unreleased track ‘If You’re Too Shy (Let Me Know)’ was a welcome trip back to the 80s, as they’ve pushed their use of synth to new levels and the audience was all too happy to sing along with typical Healy lyrics “She said maybe I’d like you better of too took off your clothes”, while the man himself got the crowd to clap overhead.

The environment has become an ever-present issue, with Healy’s previously stated plans to put on “the greenest show Finsbury Park has ever seen” in July. It was no surprise that a segment of the show would be dedicated to the cause- with Greta Thunberg stating that to “do our best is not good enough” and it’s “time to rebel”, the latter a lasting thought often associated with Healy.

The synth-melodic track ‘Love It If We Made It’, described by Healy as “about our failures as humans” was swiftly followed by ‘Chocolate’ – a song about people during their youth driving around south Manchester to get a tent back while smoking weed. It is one of their most well-known tracks, and you will have heard it if you’re a regular indie club-hopper.

Another old-but-gold favourite was ‘Robbers’, a track described by Healy as dedicated to 16-Year-Old us. A true gift to any 1975 fan. Furthermore, fans dedication to the band was shown by the recently released track ‘The Birthday Party’ which was sung back word perfect back to Healy. It featured a saxophone which was to be heard through many songs of the night.

A special mention has to go to the emotional track ‘I Always Wanna Die (Sometimes)’. Healy told everyone to “wait a moment as [he doesn’t] normally talk before this song, but this song is very much for you Manchester”. Healy was shown with a single spotlight, for this acoustic number. The crowd were waving their phone lights like stars and for the chorus, Healy stopped singing to leave the crowd to sing, it was as much their song as his. This community spirit is the foundation of a 1975 show, and the last strums were drowned out by the clapping. Together we are stronger.

Healy’s self-proclaimed favourite ‘Give Yourself A Try’ is a millennialist banger and is perhaps more significant to our generation than the obvious points made in ‘I Like America & America Likes Me’ with “kids don’t want rifles”. Healy’s best lyrics are his most obscure. Fellow Mancunian band Oasis may have had ‘Wonderwall’, The 1975’s answer has to be ‘The Sound’. Peppered with comments on the screen such as “Do people still make music like this?”, showing that The 1975 will be sleeping soundly on a bed of hate comments. 5 years later they’re still selling out arena level shows. Who’s laughing now?

Healy’s best lyrics are also his most obscure. If fellow Mancunian band Oasis has ‘Wonderwall’ then The 1975’s answer has to be ‘The Sound’.

Overall, it was a show demonstrating the topical issues in our world, from Kristi commenting on sexism in the music industry to Healy putting a spotlight on the activism needed on climate change. From such a forward-thinking label, it was to be expected and gives hope to the future of music.

In surely a few weeks we’ll finally have ‘Notes On A Conditional Form’ in our grasps. You know what they say, you can’t rush perfection. Especially where Healy is concerned, “God bless The 1975” indeed.