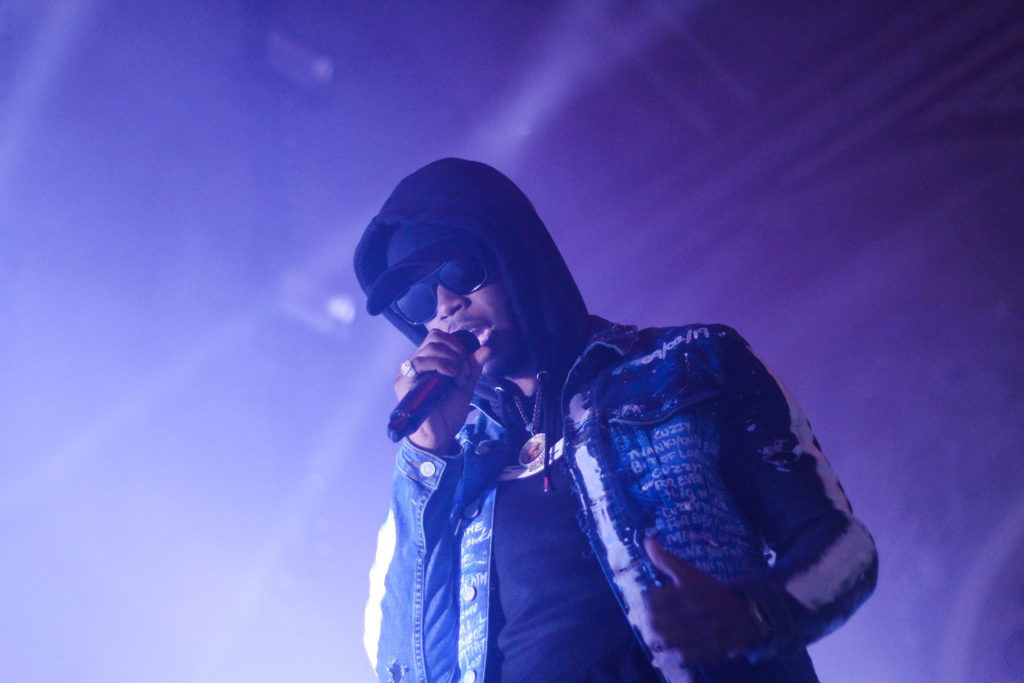 Words and photography by Leah Iotton

Krept and Konan, a duo who work within the genres of British rap, grime and hip-hop, have just released their newest album Revenge is Sweet on November 19th.

The South London born-and-bred pair have grown up surrounded by music from a young age. Konan, as the son of ‘Jamaica’s first child star’, Delroy Wilson (a ska and reggae singer) has music in his blood.

The stage of the Albert Hall featured the backdrop of a derelict sweet-shop, which represented the duo’s latest album cover as well as their aptly named dessert restaurant in Croydon, ‘Crepes and Cones’. This clever marketing tactic worked well, especially considering the success of the restaurant – artists such as Dave, Not3s and Ramz have been known to visit.

Krept and Konan bounced onto centre stage and performed their first track ‘Goat Level’, silhouetted by the light-walls behind them, highlighting their stage presence and ability as explosive performers, each taking their turn at front of the stage during the verses.

Krept had a clear connection with the crowd as he assertively spat his bars, whilst Konan took the calmer approach to his moment in the spotlight, eyes shut, he seemed to be focusing more on his lyrical performance than his physical one. Nonetheless, the audience continued to lap it up.

The pair performed songs from the album including ‘Air Force’ featuring DigDat and K-trap, a drill-influenced song that speaks about life from the perspective of the artist. Drill music, despite its heavily criticized reputation, is essentially a form of communicative story-telling. The genre arises from a working-class background and from a culture that suffers from racial abuse and is unhappy with the society they live in.

Drill music’s themes of hedonism and crime are what lead to its scrutiny in mainstream media, yet, when it’s broken down, it’s just a form of artistic expression with political connotations, which was recognizable in this performance.

Throughout, Krept and Konan made tributes to fellow figureheads in their scene, performing songs from their album that feature artists such as MoStack with ‘Cheating on Wifey’, Stormzy with ‘Keep Talking’, D-Block Europe and Ling Hussle with ‘Tell me’ and finally WizKid with ‘G Love’.

However, the artist they focused most heavily on was the late Cadet. Cadet, the younger cousin of Krept and a British rapper, died in February 2019 in a car crash. During the gig, the pair gracefully paid their respects to the artist, performing a song he featured on ‘Keep Talking’, followed by Cadet’s own song ‘Advice’. The duo avoided getting too involved and instead let the song play – it seemed more like a moment to be silent and considerate than to override.

There was clearly a strong emotional history – Cadet had written a song called ‘Letter to Krept’, during a musical journey which started in 2005. This was further emphasized by a heartfelt speech from Krept, alongside the painted portrait of his cousin displayed on the back-side of his denim jacket. As the duo performed ‘Broski’, the crowd were encouraged to light-up the venue with their phones.

‘I Spy’, one of the more popular tunes on the album, started and the atmosphere blew up. Smoke cannons fired and the stage lighting truly came to life. Konan tried to take advantage of the energized crowd but executed an ill-timed stage dive which required a bouncer to retrieve him from the abyss of reaching fans. K-Trap, the feature on ‘I Spy’, was brought out which only further pushed the crowd to higher levels of frenzy.

All in all, the show was wild. Krept and Konan’s rise to the top of their scene only continues and their success in both their dream restaurant business and their music is inspiring. They’ve become well-defined artists and are positive representations for young, black boys involved in the rap scene, giving an under-represented demographic something to aspire to.