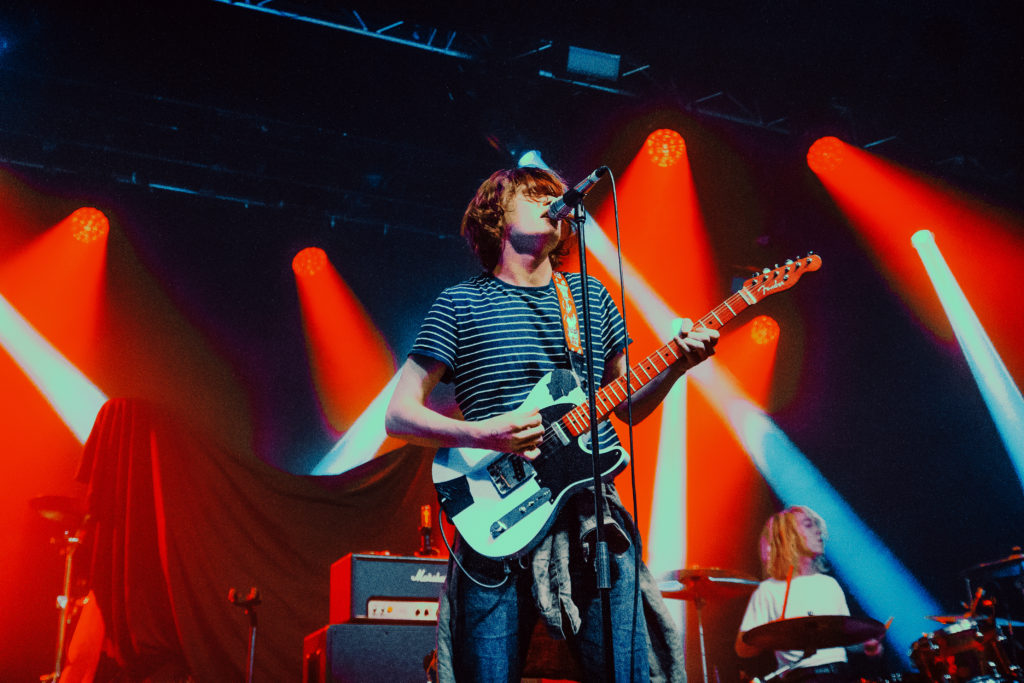 King Nun vibed into Manchester’s heart as they stomped their way across the stage in rebellious rejoice at the Soup Kitchen.

With all the community spirit only Manchester can harbour, vocalist Theo Polyzoides and his comrades transformed the venue into a new dimension on February 24th.

At the age of 22, Theo is sharing this energy with the world on his international tour, something he mirrored in an interview with aAh! Magazine before the band’s performance.

“We have a van, a space shuttle, which goes from planet to planet, dimension to dimension. [But} I believe we got here by motorway,” Theo said about his journey into Manchester.

“We’ve been here a bunch of times through tours. It’s my favourite city in England. Architecture, people – I’m excited to be here.”

“My Dad’s a cameraman. He’s a very visual thinker and that engulfed on me at an early age,” Theo told aAh! Magazine.

“We used to play a game between me and my and sister where he would ask us to describe an event as descriptively as we can.

“Whoever could do it would win. Because of that, it was installed in me. Music is still a visual thing for me. A lot of our songs are visuals. We have a song called ‘Chinese Medicine’ – there’s a Chinese medicine place. ‘Greasy Hotel,’ characters and things – my Dad had a huge impact on me.”

King Nun was excellent in giving the audience a first-hand relationship by getting to the front and inviting the crowd to get close. At one point, Theo even tore off his shirt to swing from the overhead pipes, taking the hype up to the max.

Theo believes that music should unite people, and go “hand in hand in the community.” He also believes that genre isn’t King Nun’s main focus compared to other artists.

He said “I know it’s rock music to some degree. It all comes into marketing. We tend to stay out of that until we’ve made a product.” He added that he’s not sure what to call it exactly.

Theo admitted that his life goal is to bring his adventures to the audience and that his visionary approach to music has defined the band’s message.

“My life goal is to get to a point as a songwriter where I can translate something I have experienced as a song and I can covey a situation without struggle,” he said.

The closest he has got to that is with ‘Bug’. Theo said that he is proud of that in itself because of the “fragility in its experience,” adding “There’s a lot that I understand about that song.”

There is one goal that rounds up everything King Nun does – community. This approach is totally Mancunian in itself which gives the band a quality rating, both skillfully and creatively.

Theo said music brings people together, something he emphasises that about rock in particular: “Especially rock music where everything is built on catharsis and sort of bending your emotions and escapism.”

Theo added the band’s ethos is “to bring the outsiders and give them a place because that’s what we’ve done for so long.”