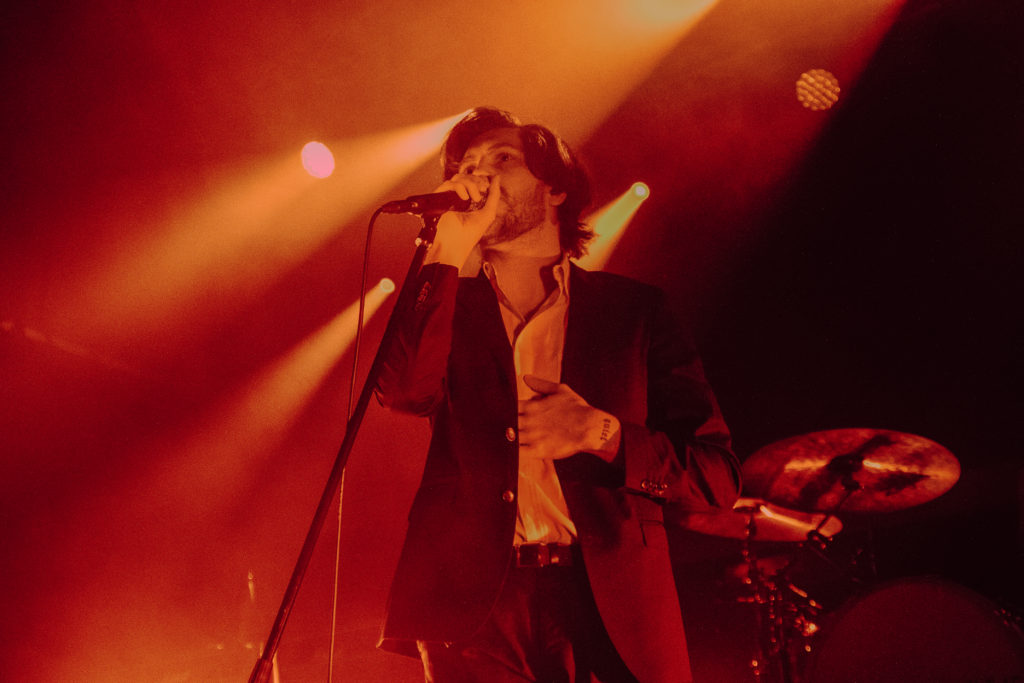 After undergoing a rebirth in their native Glasgow, Twin Atlantic were back, with supporting band Bloxx to unleash their newly found power on the crowd. In light of recent events, the Manchester date was one of the last dates before the rescheduling of future dates in October later this year. The only thing dangerously infectious at this show would be the electric atmosphere.

London-based indie band Bloxx may only have a single EP to their name, but they are a band fuelled by ambition. After touring all over Europe and the US, and now successfully supporting Twin Atlantic – albeit cut short due to the ongoing Coronavirus outbreak, it was a glimmer of what this band is set to achieve. The London quartet consists of Ophelia Booth on vocals and guitar, Taz Sidhu on lead guitar, Paul Rau on bass and Josh Kinton on drums. They’ve enjoyed a dramatic ascent from surviving college and shifts at ‘Spoons, to topping Spotify’s Indie List playlist – as well as touring with the likes of The Wombats and Sundara Karma.

‘Seablue’ was a stellar opening. It featured thumping drums with Booth‘s unique vocals cutting through the atmosphere, dripping with emotion as she sang: “I’m doing fine/ but I find pieces of you everywhere”. Their energy is at the centre of their performance. Booth was jumping with Sidhu, clearly rocking out having fun, with the drums and bass also working in tandem.

Melodic-indie track ‘Coke’ was a reminder of how long this band has been working. Booth announced that it was a song they “wrote when 18 or something like that”. It was a deceptively soft track, with the darker side of relationships unveiling as they wove their instrumentals together. ‘Novocaine’ demonstrated their range as a band as it featured softer breathy vocals and was an electronically driven number. Each riff acted as a sonic assault. ‘Headspace’ saw Booth mouthing “I’m gonna cry” to Rau – it was refreshing to see an artist so caught up in the moment of the night.

Before they could properly get into their recent track ‘Go Out With You’, the night wasn’t without a slight technical hitch. This left Booth announcing “Well that’s great. What’s just happened? This is the best thing in the world”. With no guitars or drums, they still persevered and said: “let’s have it Manchester”. They came back from it quickly, as ultimately, the show must go on.

After joking they were going to cut a song from the set, due to the technical difficulties cutting them off – they launched into their final track ‘Curtains’. It was a finale on how to do a real show. With both guitarists lifting their guitars towards the sky and playing in sync, coloured lights flashing to heighten the intensity – it was mesmerising. This track highlights how this band is one of the most exciting to watch right now, as they schooled us in what makes an indie-rock banger. As Booth walked off at the end, she left us at the mercy of her bandmates as they hammered the track home.

Twin Atlantic are not only masters of longevity, but seasoned musicians with over a decade of performing under their belts. The Scottish rockers have recently had their fifth album POWER recently released into the public domain. Signing to a new label, building their studio in their hometown of Glasgow and adopting a new electronically fuelled approach, they were more than ready to welcome the new era of Twin Atlantic. On tour, they are formed of vocalist and guitarist Sam McTrusty, bassist Ross McNae, drummer Craig Kneale and guitarist Barry McKenna.

As soon as they entered with the lights flashing red, blue and green – a hallmark of their latest studio release, with their opening track ‘Novocaine’, the crowd’s reaction wasn’t enough as McTrusty announced they were “F***ing pathetic, get your hands up and jump”. The intensity of the tracks from this album was tenfold in comparison to their previous releases, as they’d forced themselves to be more honest and open lyrically. Such as ‘Novocaine’ turning the classic cliché love story on its head, with lyrics such as “You tried to play the guitar/ Its strings were broken /You tuned it to my heart” accompanied by a pulsing electronic heartbeat. It was thrilling to watch. Despite some worries of how the new electronically-based tracks would transfer to the live stage from the studio, they were executed perfectly and the crowd already had them word perfect as they thundered into ‘Volcano’.

Their old favourites were received just as well as their newer ones. It was interesting to see them integrate tracks from each of their albums. Such as following their newer tracks with the indie-rock anthem ‘No Sleep’ from GLA and empowering number ‘Hold On’ from Great Divide. Every track proved that the band has stayed true to themselves from the beginning. In particular ‘Hold On’ had McTrusty singing that you have to “Be brave” so you can “have a life worth living”. Advice which they’ve taken for their own admission with POWER, and have really found themselves.

The track ‘I Feel It Too’ saw the contrast between the electronic new tracks. A band with a decade experience together, showed them enjoying their new creative pursuits. Behind them, the visuals were an extension of their new facelift, with the blocks lighting up like old school electronica. ‘Yes, I Was Drunk’ was dedicated to the newbies, after the band discovered it was a lot of fans’ first time seeing them live. It was an old ballad style showing that Robert Burns wasn’t the only poet to come out of Scotland. Their music is all about them and the community their music has created. Their simple white attire leaves their music to speak for itself.

Emotional track ‘Whispers’ had the crowd with their arms up singing together “if dying is the easy part”. One of the rock songs which set them on the path to success. McTrusty announced: “thanks for waiting for us to come back”. However, he rated the audiences a 6/10 and said he’d be “booing the crowd”. However, he’d be “marking himself as a 3/10 as [he‘s] garbage”. With this in mind, the crowd stepped it up a notch to appease the showman. Much-loved track ‘Brothers & Sisters’ highlights the sense of community at their shows and a sense of rebirth, as the audience jumped with their hands in the air. McTrusty lifted the mic stand to the crowd so they could finish it off.

Before they could launch into track ‘Free’ the show was stopped by McTrusty who announced us to wait, as it was an audience member’s 78th birthday. Naturally, all that was left for the band was to perform a short ‘Happy Birthday’ sing-a-long. ‘Free’ is a hint of the direction they were taking with POWER, with powerful lyrics such as “Where‘s your fire tonight” and empowering instrumentals. Revisiting ‘Free’ has surely taken on an even more significant meaning for the group, as a conscious choice for the production of POWER was to have “no limitations”.

The crowd were treated to two acoustic numbers. Track ‘Oceans’ saw McTrusty left on a stage bathed in white light. It was an emotional track and a duet with the crowd, as they sang “Cause I don’t want to let down my hometown”. It was a calm and touching tribute to their history. It was followed by an acoustic rendition of ‘Crash Land’. This continued the emotional precedent set with moving lyrics such as “You drag me back home/ I deserve to be rescued”.

Their whole set could be summed up by the last track of the night ‘Heart and Soul’, which they dedicated to Bloxx. After foregoing any airs or graces with no encore, it was a celebration of the community which the band has created, with drums mimicking a heartbeat and riffs galore. A crowd member managed to throw a bra on stage and were rewarded for their efforts by McTrusty, who donned it for their last number. It’ll be exciting to see what they create next, now they’ve taken the power back for themselves.