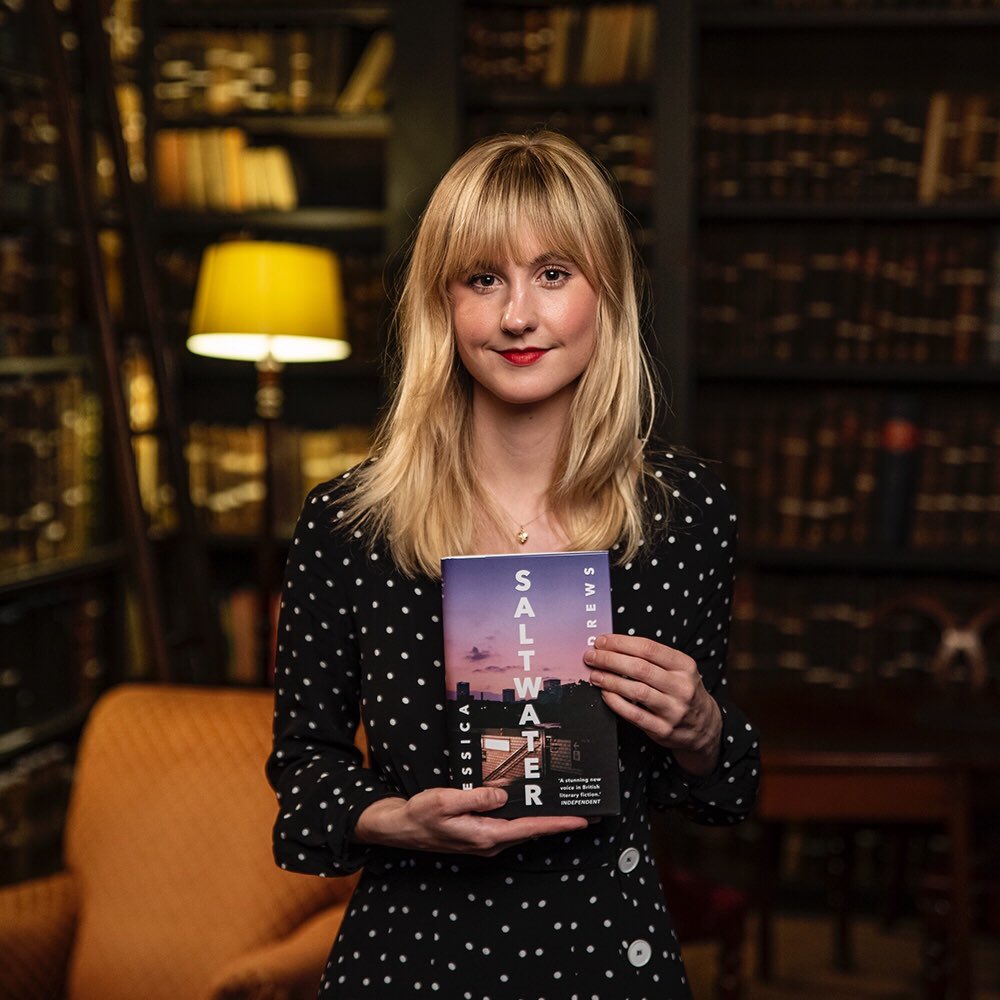 Debut novelist Jessica Andrews is crowned the winner of the Portico Prize 2020, for her book Saltwater.

Jessica Andrews’ book Saltwater wins this year’s £10,000 Portico Prize – the UK’s only award for outstanding literature that best evokes the spirit of the North.

Saltwater, published by Sceptre, is a story of self-discovery by a girl from Sunderland who heads to university in London, taking her northern roots with her.

‘What makes her novel sing is its universal themes: how a young woman tries to make sense of her world, and how she grows up,’ writes Penelope Green for The New York Times Book Review.

Andrews studied English in London and went on to study a Masters in Creative Writing in Kent. Hailing from Sunderland, Andrews attended the readings event with her mother.

Discussing her debut Saltwater, she said: “Writing a book has been validating to me because I sort of had this tentative idea that these things are important.”

“I wanted to write about ordinary life but give it a spin like – [like how] ordinary things have poetry in them,” Andrews said.

She added: “A life that is not often regarded as great as literature – it could be.”

Andrews explained how the book is told in three different strands and discussed her interest in exploring the intimacy of the physical relationship between a mother and her daughter.

“Being considered for the shortlist is a big privilege [but] I guess as soon as you write a book, the best thing is to write something that you are happy with. The rest is just a bonus,” she said.

On the eve of the Portico Prize award ceremony, writers and literature fans gathered at Manchester Met to hear readings from the six shortlisted writers from the North of England.

Joining the crowd was Julie Hesmondhalgh, award-winning actress and former Coronation Street star. Hesmondhalgh was there to support Graham Caveney, who was reading from his book The Boy with the Perpetual Nervousness.

“We’re friends from Accrington and the book is set in Accrington and we are incredibly proud of him and so chuffed that this book which is very much about ‘Northern-ness’ and working-class life in the north of England and has been in such a competition,” Hesmondhalgh said.

“I’m a big reader and Northerner, so it’s a perfect event for me to come to.”

Caveney’s memoir, The Boy with the Perpetual Nervousness, describes him growing up as a member of the ‘respectable working class’. From aspiring altar boy to Kafka-quoting adolescent, his is the story of a teenage boy’s obsession with music, a love affair with books, and how he eventually used them to plot his way out of his home town. But this is also a story of abuse.

Caveney silenced the audience with his experience of being sexually abused as a student. He gave an insight into why it was important for him to write this book.

“When abuse is written about, it tends to be understandable and sombre,” Caveney said.

“I wanted to kind of play with that a little bit and bring out some of the farcical elements because one of the horrible things about abuse is that it happens every day.”

Inspiration also played a big part in the work of the writers shortlisted. Adelle Stripe revealed that she was inspired to write Black Teeth and a Brilliant Smile following drama/documentary The Arbor (2010).

“[The film] is about Andrea Dunbar’s life but mainly what happens to her family when she dies,” Stripe said.

The film left her with a lot of questions and she felt compelled to find the answer.

Stripe said: “I thought she was an important person in the history in the North of England, she’s not been documented and maybe that what I should write. If that book doesn’t exist, go write it yourself.”

Reading The Mating Habits of Stags was actor and Manchester Met alumni James Quinn on behalf of Ray Robinson, who couldn’t be there on the night.

The lyrical novel from the award-winning author of Electricity and Forgetting Zoë, follows Jake, a widower in his seventies, as he wanders the beautiful, austere moors of North Yorkshire trying to evade capture.

We learn of the events of his past: the wife he loved and lost, their child he knows cannot be his, and the deep-seated need for revenge that manifests itself in a moment of violence.

The evening was inspiring for those setting out on creative paths of their own.

“If you want to be an actor or writer, resilience is key. Diversity too,” Quinn said.

He emphasised the importance of getting involved in as much as you can: “Do acting, write voice overs – you have to have a passion for it, you can’t do it on a casual basis.”

Hesmondhalgh also had her own words on making your passion become a reality through “perseverance”.

She said: “It’s very difficult for people in terms of access through higher education, especially creative degrees and arts schools.

“It’s also about campaigning as well. Don’t make it about your own struggle but actively campaign to make it accessible for us all.”

Competition may have been an element for the Portico Prize but Simon Savage, the chair of judges, explained it was designed to celebrate Northern writers.

“It’s all about having an event that’s open to the public from the North because the whole point of the prize is to celebrate the spirit of the North,” he said.

“Manchester is a force of nature in terms of creativity and culture.”

David Cooper, senior lecturer in English at Manchester Met, added: “We’ve been working for the library over the past 12 months on the Portico Prize. It’s all been building up to this week and it’s really exciting to see all these people and from outside of the university.”

The librarian of the Portico Library in Manchester, Thom Keep thought hearing the books and the authors’ voices brought life to their books.

He said: “Hearing them in their own dialect and own emotions being put into those books brought them alive.

“Some of the nature was emotional and the language was intense but the sense of humour linked them all.”