You are here: Home / Culture / Interview / Music / Interview: Frontman of Karkosa, Michael Warnock On Gaining a Following In South Korea, Being a Serial String Breaker, and Planning a Gig in New York 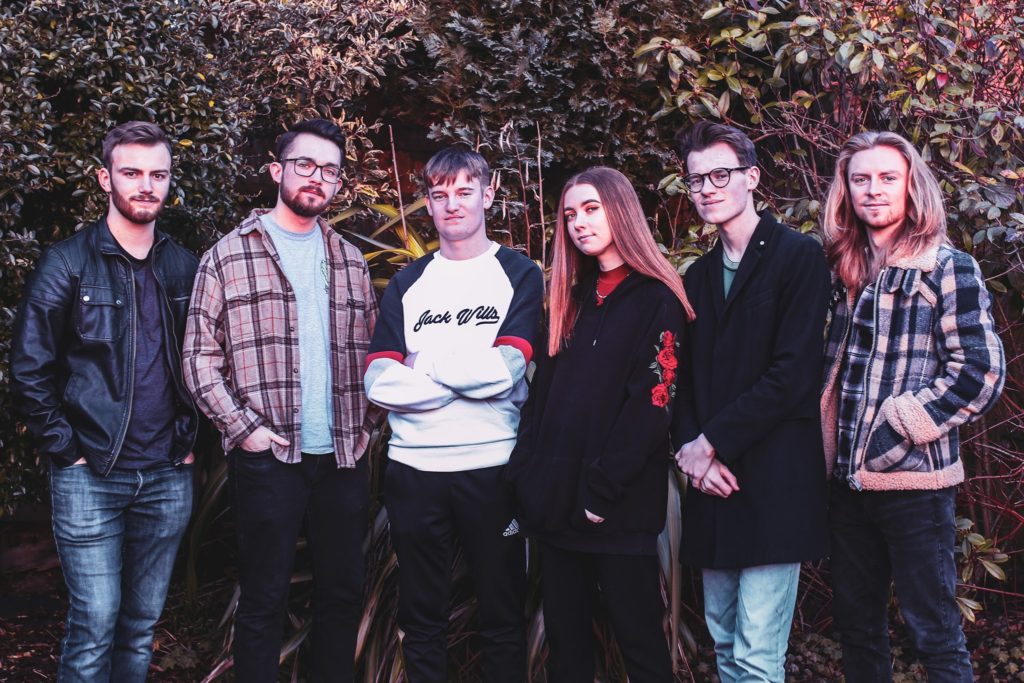 Not many emerging bands have a festival appearance in South Korea under their belt, however, despite only properly forming in the last few years, Birmingham-based band Karkosa are already in a league of their own.

Their full-bodied sound is created by frontman Michael Warnock (vocals/ rhythm guitar), Jack Warnock (drums), Tom Rushton (lead guitar), Isabelle Florence (bass), Will Clews (keyboard) and Pete Donnelly (trumpet). From melodic catchy anthems such as ‘Mango Tree’ to their quintessential blend of vocals and riffs on ‘Aurora’, Karkosa are set to infiltrate the airwaves of every continent with their catchy indie-rock anthems.

aAh! Magazine was lucky enough to get the scoop on Birmingham’s latest export from their frontman, Michael Warnock, before the band’s next headline show at Mama Roux’s on the 19th of February.

How did your band name come about?

“The band name came from a book called ‘The King in Yellow’. The character lives in a fictional city called Carcosa and we decided to have a similar name, only to change it to Karkosa with a K. Mostly because it sounded cooler.”

How did your band form?

“The band started with me and my brother. We originally started as a duo called The Season, but later went on to expand upon the lineup by adding on lead guitar, keyboard and bass. Since 2015 the band has been evolving to this day and has left us with our current lineup.”

How would you describe your sound?

“I would personally say our music fits with the rock/indie scene.”

Which bands do you admire and have they influenced your music?

“We all have very different music tastes which can lead to our inspiration coming from many different places. For me, bands such as The Amazons, Catfish and the Bottlemen and Wallows have really influenced my songwriting over the years.”

Is there ever collaborative conflict in the nature of being a six-piece?

“Being a six-piece band allows there to be a lot of room for different ideas and a large flow of creativity. This can be great when it comes to songwriting, performing, and many other aspects of being in a band. However, it can also lead to occasional ‘butting heads’ as everybody will have an opinion on something and it’s part of being in a band to find the common ground along with a solution, which everyone agrees with.”

Have you ever had to deal with any gig malfunctions?

“I’ve gained quite the representation to break my strings whilst performing due to my heavy attack on the guitar! However, I’ll always have a backup guitar on the ready, usually, it just allows the band to improvise on stage until I’m ready to go!”

Who is/are the main writer(s) of your material and is there a process behind it?

“Usually a song will begin with me writing the general structure and lyrics. I will bring this song to the band if I think it has potential and we all work on it together, filling in the gaps and changing it around until we all have the confidence to try it out live. Sometimes songs will be scrapped after a few gigs but most of the time we’ll keep the song on the set until we record it one day!”

How did your appearance at Zandari Festa in South Korea happen and how was the experience as a whole?

“Our fan base in Korea came about from the power of social media! We had a formula to gain a larger audience by following fans of artists which we liked. One girl followed us back and sent us a message saying how she loved our music and was going to tell all of her friends about us. It just happened that our music somehow went viral in Korea overnight!

From 200 to 2000 fans on social media, we decided we would aim to go over there and perform! This led us to Zandari Festival, who agreed to have us on as a part of their networking event. From there on we would play one of our greatest gigging experiences to date and it’ll be hard to see if anything could ever top it!”

Which song is your favourite to play live?

“My personal favourite is either of our two upcoming singles, ‘The Rival’ or ‘Runaway’. I’ve always been a big fan of our fresher music, simply because it’s new and exciting! I also enjoy hearing what the audience has to say about it after the show.”

Your next show is headlining Birmingham’s Mama Roux’s, are there going to be any new additions to the setlist and what can we expect?

“Yeah, we’ve definitely got a lot of exciting things planned! We’ve been inspired by some local bands here in Birmingham such as The Novus and The NU. They promoted their own gigs and made it into an experience for audiences! It was a great way to engage their fans and also bring in new ones, including interest from the wider industry. After a year of supporting, we decided it was our time to step up and give it our all. Audiences will get to see it all in person, on February 19th.”

When can we expect to hear more music officially released?

“Our next single will be released on February 14th, just before our big headline show. It’s a song called ‘The Rival’ and we’re pretty pleased with how it turned out. Another exciting release will be our latest song ‘Runaway’ which will hopefully be out sometime around March, just before we go to New York. We’ve got a lot of faith in the song on a commercial level but also on a musical level. It’s very different to what we’ve done before!”

Do you have you any more gigs or festival appearances planned for this year?

“The next big experience for us will be New York in March! After that who knows? We’ve got a few things planned but mostly want to take a back seat after a busy three months and hopefully work on some new songs.”

Tickets for the band’s headlining show at Mama Roux’s can be purchased here.

Keep up with Karkosa on social media: