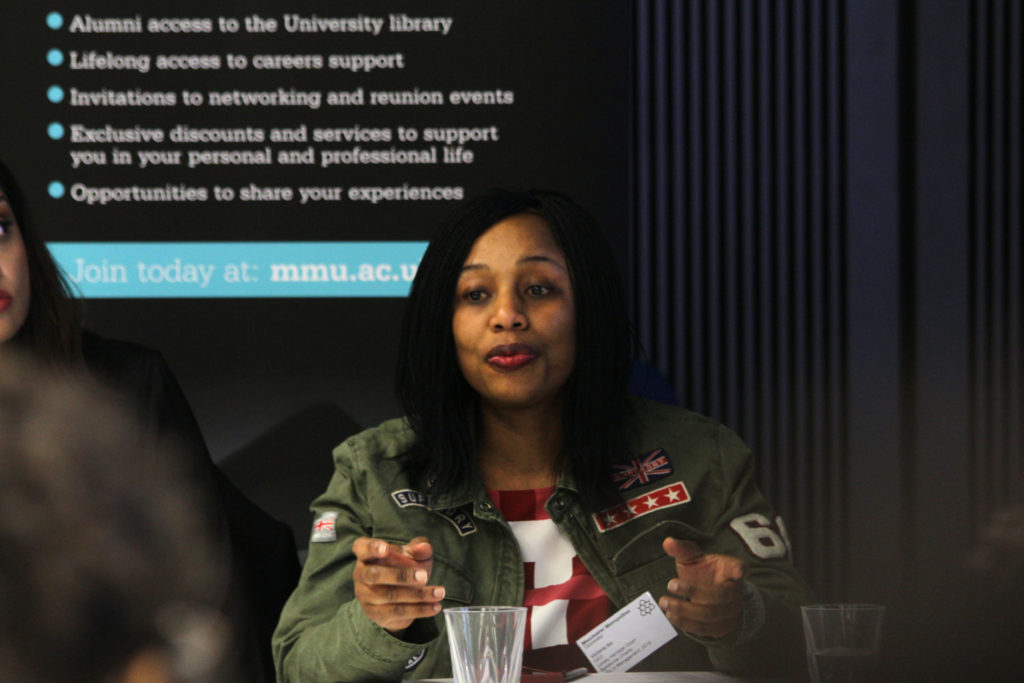 Alumni from Manchester Metropolitan University opened up about the struggles facing BAME and female students in university and the working world for International Women’s Day 2020.

The event featured alumni from all walks of life, from journalists and teachers to scientists and artists, who revealed the obstacles surrounding their gender and race, and how they overcame them to achieve success.

The event was hosted ahead of International Women’s Day, which is celebrated on the 8th of March. The theme this year is #EachforEqual – a campaign striving for gender equality across the world.

Explaining the obstacles facing BAME students in the wider world, the panel recalled incidents from their personal and professional lives that revealed there’s still a long way to go with regards to equality for women and diversity in the workplace.

Freelance artist and illustrator Fatimah Hassan, who studied Illustration at Manchester Met, reflected on her own industry: “It’s often seen that the arts is very liberal. It’s not – that may surprise you.”

“As a Libyan living in Manchester, you get all sorts,” she added.

“Just as I was graduating, I went into an internship and as I sat down for the interview, the guy asked about my hijab. Once I explained, he said, ‘I think all people that believe in religion are stupid.’

“I was really embarrassed, I didn’t know what to do in that situation.”

The panellists emphasised the importance of not giving up and finding allies in the workplace.

Safia told the audience to “make sure you find your allies and make sure they find you”.

Parise Carmichael-Murphy, BA Early Childhood Studies with Early Years Teacher Status, MSc in Psychology, added, “Be aware that you have to represent [BAME women] every day but it’s the structures, not necessarily the people that are the issue.

“Be an ambassador in your workplace.”

Some alumni also reflected on the struggles women face when looking after their children while studying.

Science Teacher Uzma Asim, had her first child at 18-years-old, just before starting her undergraduate degree, the result of a forced engagement with a man in Pakistan when she was 15.

The now mother-of-three says the marriage and pregnancy were encouraged to stop her from studying.

“I made it a life mission to make it to university.”

When she secured a place at university, she described getting through her first degree as a “day to day challenge”.

Uzma added: “My kids are quite inspired by me. On paper, statistically, I should have probably just been a baby machine, I shouldn’t be here right now. But I broke those barriers.”

Alumni Victoria Ibe’s first son was diagnosed with Down Syndrome, which led her to become the CEO of Lovely heritage – a charity which raises awareness and helps for people with the condition, alongside their families and support networks.

Victoria, who is originally from Nigeria, said “Where I am today is because of my son.”

When asked what she wishes she’d known on her first day of university, Victoria responded: “I wish I would have known more about financial support in terms of childcare.”

Victoria told the panel that she went through much of university without any funding for her son.

Despite their hardships, the alumni panel also shared their success stories entering the world of work after finishing university.

Shamiha Patel, after doing her degree in Psychology, found herself working as the Housing Solutions Officer for Manchester City Council.

“I really love working for the Council because it’s great in terms of flexible working,” she said.

“It’s great if you have a disability, like I do. They’re really accommodating towards that.”

Shamiha admitted that she’d underestimated how difficult doing a Masters in Social Work would be.

“I had to retake it. I’d completely misunderstood the level of work that needed to be done and I carried that through into my work,” she said.

“Both of my degrees taught me how to keep accurate records, and how to work to deadlines, and how to manage your workload.”

Uzma explained to aAh! Magazine how BAME students should prepare for the working world: “You are going to face hurdles and you will come across people and structures that won’t always be easy for you.”

“It’s just having that determination to carry on,” she said.

“It shouldn’t be about [getting] black people or brown people to the top. It’s completely on merit. You need to get the grades, you need to work hard, you need to prove yourself despite everything else,” Uzma said.

Tahima Hussain, who is a Bio-Medical Team Manager at The Christie Hospital said, “Don’t limit yourself. There are opportunities out there you just need to work twice as hard to get it.”

“Luckily,” Tahima told aAh! Magazine, “I’ve not felt that way, I’ve managed to progress without having to fight as hard.

“I think if anything it wasn’t colour, it was going away and having a child that made me work harder to get where I am.”

Fatimah Hassan added that the biggest advantage of being part of Manchester Met’s alumni community was the support she received after graduating.

“They don’t just ‘drop you’. They keep in contact and you feel supported by the staff still,” she said.

Safia Mohamed shared these sentiments, as she expressed her gratitude that the staff at Manchester Met don’t leave their graduates “out in the wilderness”.

Students in the audience also shared their thoughts on the inspiring event.

“It creates a network of students so that they can connect and use each other as support throughout the university.”

Angel Mellor-Davis, a first-year Educational Psychology student told aAh! Magazine she was hoping to “hear stories of successful women and be in a room full of women, to have that support”.

Lillian, a first-year Sociology and German student, embraced International Women’s Day: “I’m really proud to be a woman and this is one day to celebrate that and be united today. That’s why I came.”

Second-year Sociology and English student Compassion told aAh! Magazine, “I’m very involved in BAME activities on campus”, adding she was interested in hearing how the panel had “strived and prevailed”.

“We need to get some inspiration. So [I want to] take a look at people who look like me and what they’re doing now and maybe gain some ideas about where to take myself after university.

“Sometimes people feel lonely. I am almost always the only person of colour where I’m going, and it’s great to be amongst other people, but also people of colour.

“Just because of some experiences that some people experience. It’s very rare to find other people like that on campus.”

By Ben Thompson and Ben Townsend