You are here: Home / Fashion / Inclusivity Over Exclusivity: How the Bushwick Birkin is sustainably redefining what being an ‘It-bag’ means 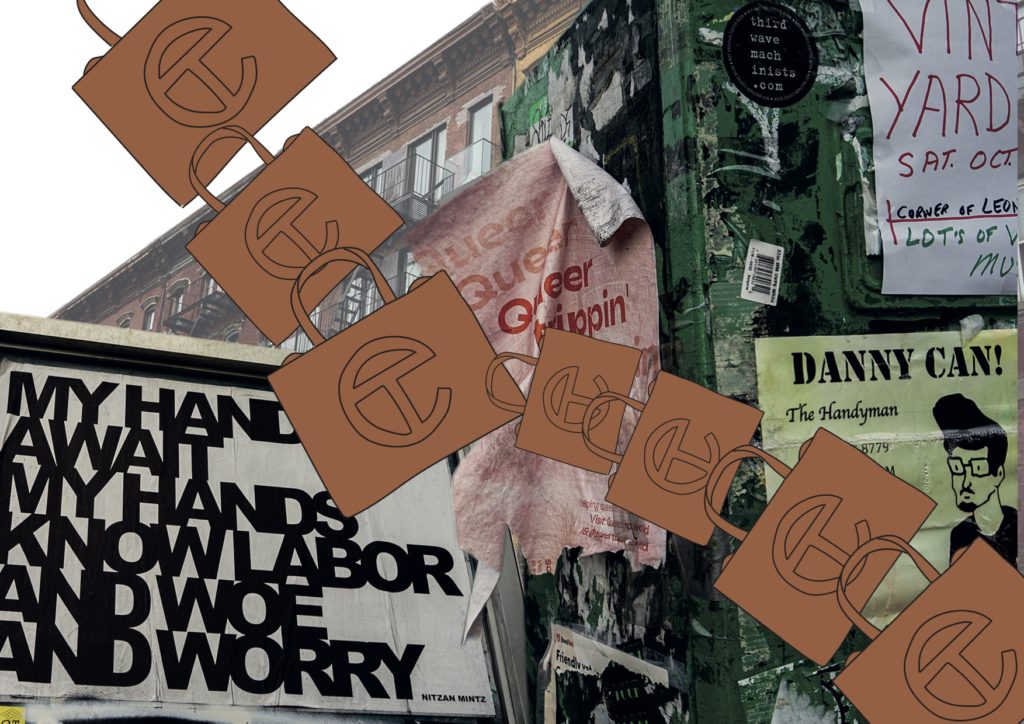 What do the Jaquemus Chiquito bag and the Prada Nylon mini-bag have in common? Astronomical prices accompanied by their tiny size, barely able to fit a bank card into it, let alone humanity’s brain extension – the modern smartphone.

Size-wise, they appear to be highly impractical and from the price, which is for both products around the sum of £500, they aren’t considered a bargain. They may not be a bargain or practical, but that makes them the material definition of an ‘it- bag’.

The ‘it-bag’, as the word suggests, is a designer bag that has become a popular best seller, due to promotion via celebrities or modern influencers, showing it off as the new “must-have”.

Usually, an it-bag is rarely a practical piece and if it happens to be so, it is highly exclusive and expensive as is the Hermes Birkin bag, priced at around £10,000, along with an ever-growing waiting list.

Until 2017, marking the year of Telfar Clemens, a young New York City-based designer, there was no it-bag existing that ticked off the boxes of being practical and affordable.

In 2014, Clemens launched it’s ‘shopping tote’ made out of vegan leather and stamped off with the brand’s iconic logo. Initially, it did not get the attention it deserved, however Telfar Clemens redid its design with the prize money he won, and a new ‘it-bag’ was born.

Prized in a range of USD150 and USD257, this bag may be the first one in the history of it-bags to achieve the unthinkable – ticking off both boxes, practicality and affordability.

Since its launch, the Telfar ‘shopping bag’ has become a symbol of group identity. Particularly amongst young creatives, queer people and people of colour based in New York City, the demographic usually overlooked from the traditional whitewashed fashion industry.

Even though many celebrities adore the bag and show it, the bag’s ‘real power’ is rooted in its ever-growing community, the young artistic folks, who jokingly call it the ‘Bushwick Birkin’, since it has a similar status to the Hermes Birkin bag, just for a lot less money.

As a teenager, Clemens felt as though he lacked representation in the fashion world, as a result, he set up his label: “Someone like me wasn’t thought of as a fashion designer.”

This summer, Telfar restocked the bag, and the demand was so incredibly high that the website crashed. Since the bag sold out within hours, in its various shapes and colours, it was suddenly seen as an exclusive item, as it was hard to get one’s hands on the desired bag.

It became a symbol against the brand’s values, so there needed to be a solution to make the bag accessible to everyone again. Within less than a month, in August 2020, Telfar made the next democratic move and launched its ’24-hour bag security programme’. In those 24-hours, those who wanted to, could get one of the highly desired bags. On this day, Telfar did an unlimited restock of every bag, meaning that the customer had the chance to pre-order and their bag was to be made exclusively for them.

With fashion’s usual lack of sustainability practises, Clemens made his ‘it-bag’ not only practical, affordable and inclusive but sustainable. Since they are producing the product on-demand, this leaves the label with no leftover stock at the end. In a statement the brand released prior to the launch, it is indicated that it will take them up to six months to produce the bag since sustainable practices and fair working conditions require time.

The bag may be considered an ‘it bag’, but it is way more than that: it is a statement piece, a material statement which preaches against exclusivity. The ‘Bushwick Birkin’ is so much more than only an accessory for an Instagram picture, it is waiting to be your co-rider on your daily commute, hoarding your everyday essentials and letting you be part of a fashion community ready for a change.