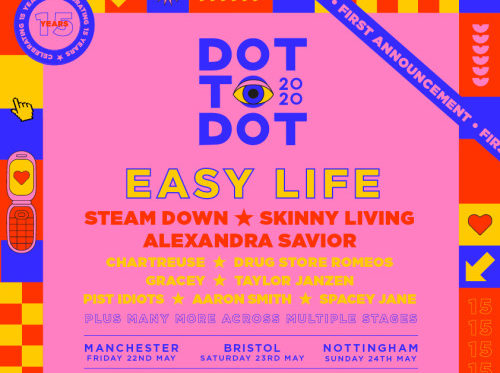 It’s that time of year again where festivals begin to boast their latest line-up announcements in an attempt to draw festival-goers in, but one festival to watch out for this year is Dot to Dot (DtD), who is marking a 15-year milestone this summer.

DtD guarantees to have a cutting edge line-up, boasting the best emerging talent from all around the globe, giving festival-goers the chance to find their new favourite band and see their already beloved musicians. In previous years, the festival has given a platform to some of the best artists to come out of Manchester such as the 1975, Spring King, Pale Waves and Phoebe Green.

The award-winning metropolitan festival will take place on the weekend of the May 2020 bank holiday, arriving in Manchester on Friday 22nd May before hitting Bristol on the Saturday and Nottingham on Sunday.

With tickets only £15.00, DtD is the perfect way to wave goodbye to exams and say hello to the summer holidays.

This year’s line-up is already looking to be one of DtD’s most diverse and exciting yet. Lazy-Sunday-feels providers, Easy Life have been announced as DtD’s first headline act of 2020.

With the release of their latest mix-tape Junk Food packing sounds of jazz, indie, R&B and hip-hop, it is easy to see how their sound has courageously developed since their arrival on the indie scene in 2017. The Leicester five-piece are set for a triumphant year if their success in 2019 is anything to go off of.

South-London collective Steam Down are also joining the line-up, gaining the well-deserved privilege of being the first band announced to play the jazz stage, a brand new addition to the festival for 2020. The award-winning group perform with a refreshing vibrancy and can be caught at one of London’s most compelling jazz nights at Buster Mantis in Deptford, where they hold down a residency. If you’re looking for something different, Steam Down‘s set is where it will be.

For fans of seemingly effortless ambient dream pop, Alexandra Savior is listed on the DtD line-up. With her latest release ‘The Archer’, which came out only five days ago, festival-goers will have the chance to hear her new release for the first time live in the UK. With Lana Del Rey meets Miles Kane vibes, it is hard not to adore her theatrical, cinematic-glamour sound and we can’t wait to witness it live.

It’s refreshing to see such a diverse festival line-up with excellent emerging talent. Often, festival line-ups are noticeably lacking in female artists, however, DtD has made a noteworthy effort to change this. We’re eager to see what exciting artists will be announced next.

Tickets for the festival are available now over on the Dot to Dot Festival website. Make sure to follow their social media for the latest announcements.