You are here: Home / Culture / Opinion / Opinion: ‘Don’t Die of Ignorance’: The legacy of AIDS PSAs in a world of Coronavirus 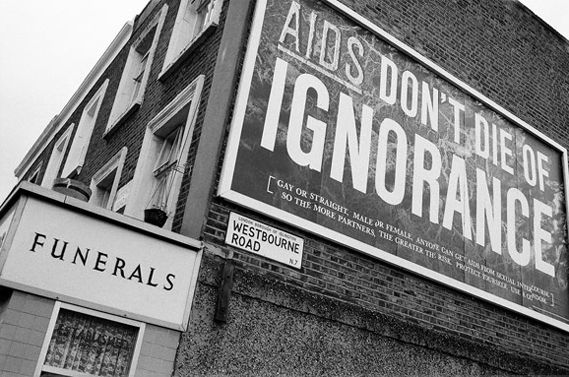 In the years before James Cameron’s Titanic, an eerie iceberg appearing on their television screens carried a very different connotations for Britons living in the 1980s.

The ominous block of ice had hidden dangers – as icebergs tend to – namely, the word ‘AIDS’ etched out in large letters, hidden beneath the surface of the misty waters.

Although this might sound bizarre now, this was considered the centrepiece of the British government’s campaign to raise awareness about HIV and AIDS in the 1980s. The 1986 advert urged viewers ‘Don’t Die of Ignorance’ and instructed them to follow the guidance of a leaflet that was being sent to every household.

Other public service announcements from around the same time took a similarly harsh approach. One particularly creepy advert shows a young girl descend in heroin addiction and her declining condition is mirrored in a doll that is continuously pricked with pins. When the unfortunate girl finally succumbs to the dreaded AIDS infection, her doll counterpart falls dead with a needle protruding out of its chest, the words ‘Smack isn’t worth it’ appear on the screen.

Perhaps nowadays we would judge this campaign to be fearmongering and sensationalist. But at the time, the government took the matter of AIDS gravely seriously.

Between 1982, when Terrence Higgins died of a AIDS-related illness, and 1985, when the government decided to open needle exchanges for drug addicts, very little was done to tackle the growing lists of AIDS fatalities.

The government must have felt they were making up for lost time, hence the nightmarish imagery presented in their television broadcasts. Norman Fowler, the Secretary of State for Health and Social Services under Margaret Thatcher, and Donald Acheson, the Chief Medical Officer, feared that there could be 300,000 HIV cases in the UK by 1992 if nothing was done.

It may have been judged as fearmongering, but it may well have been effective. France, Spain and Italy were all judged as slower to react, by the Terrence Higgins Trust, and all had double the amount of HIV-positive people that the UK had at the time.

The fear-mongering campaign was soon being imitated around the world.

In fact, some countries took it even further. An Australian PSA depicted Australians being ‘bowled down’ by Grim Reapers rolling bowling balls that represented AIDS – above and beyond anything shown on British television.

The idea of a disease rocking the collective consciousness is now something that seems abundantly relevant to us now.

However, many have slammed attempts to draw comparisons between the AIDS epidemic of the 1980s and the current COVID-19 pandemic. Although many Americans have sought to draw comparisons for the sake of historical continuity – noting an inept government response, the bravery of frontline health workers and the stigmatisation of certain groups – others have shunned such parallels.

Writing for LGBTQ Nation, Mark S. King objected to drawing any parallels between the viruses. ‘No one cared about people dying of aids in the early years of the pandemic,’ he wrote. ‘The stock market didn’t budge. The president didn’t hold news conferences. Billions of dollars were not spent […] There is no comparison.’

And yet the fear remains palpable, and conspiracies have risen. 5G conspiracy theories are abound on the internet, following in the footsteps of their forefathers who speculated that AIDS was manufactured to cull the population.

The government has had to respond quickly to try and direct people towards keeping themselves healthy. Notably however, the campaign has been remarkably upbeat.

Whether it’s the bright banner of ‘Stay At Home, Protect The NHS, Save Lives,’ that have adorned many a Twitter header or the generally level-headed press conferences fronted by government ministers, there is less a sense of foreboding doom.

But when we see people flouting social distancing and heading off to the park, it does raise the question of whether a little bit of fear could go a long way in encouraging people to follow government guidelines.

Andrew Dalton, a Senior Lecturer in Sociology at the University of Sunderland, doesn’t think the rhetoric of the AIDS campaign needs repeating during this current pandemic. Dalton is currently studying a PhD at the University of Leeds exploring the lived experiences of older people living with HIV.

“The only thing those adverts managed to do was to scare people,” Dalton tells aAh! Magazine. “While they were effective in making people aware that it was something that could happen to us all, they were deeply stigmatising in that they blamed ‘small groups’.”

“I am not sure that blunt advertising is always beneficial. I think we do need something to shock, but we need a more measured campaign (mindful of language) as using a style we have seen from the 1980s caused panic and stigmatisation for decades afterwards – people still talk about ‘catching AIDS’, which is impossible, due to the language used in those adverts.”

Ultimately, the rate of HIV transmission declined in the west thanks to education and scientific advances. Although COVID-19 is different in many ways, it may have to rely on the same solutions – not fearmongering through the media.