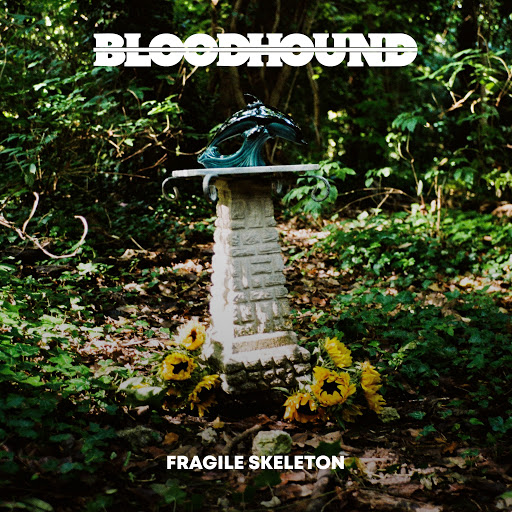 Despite the fact their new debut album is called Fragile Skeleton, Bloodhound has showcased the earth-shattering strength in their sound and proven that they’re only just getting started.

Hailing from Hull, the band has been honing their skills since their formation in 2015, actively taking inspiration from bands such as Drenge, Queens of The Stone Age and most noticeably, Royal Blood.

Bloodhound is made up of Max Lilley on guitar and vocals, drummer Bex Probert and bassist Will Biggs. The most astonishing aspect of this band is how they carry off such a full-bodied, grunge-rock sound, despite only being a three-piece. Their debut album is an ambitious project, focusing on the aspects of our lives which we attempt to hide. The album acts as a journey through the frailties of human experience.

The band themselves have stated on their album that it’s a “Journey through all of the material we have chopped and changed over the last three years.”

They add: “It‘s more a story of personal experience and how a person can appear strong on the outside but, inside, they are fragile and afraid. It covers a lot of emotional experiences and delves into the delicate problems that so many people hide.”

Leading track ‘Everyone Is My Friend’ introduces the catchiest chorus of the album, which includes crashing cymbals and instrumentals that are a little rough-around-the-edges. However, it’s contrasted with honey-like vocals to make you keep it on repeat.

At around two minutes in you’ll hear perhaps the most Royal Blood influenced section on the album, however, it works exceptionally well and is quickly followed by a dramatic climax. Furthermore, track ‘Worn Down’ is the sonic equivalent of a kick in the teeth. A heavier Nirvana-style track, which uses intermittent quiet periods famously used in ‘Lithium’ to increase the tension, before the guitar and vocals are unleashed simultaneously at full throttle.

The album also features several exciting collaborations. Brooders own singer and guitarist Adam Bairstow also had a hand in recording and co-producing Fragile Skeleton. Fiona Lee’s vocal influence on track ‘Cold’ also adds an ethereal feel, portraying the loneliness we can feel when a loved one has left.

Lee is known for her heartfelt and soulful influence on songs, and she suits the track well. The track picks up near the end with soft drums and a high electronic influence, which keeps things interesting. ‘FRSTRTD’ shows Lilley’s vocals working well with Brooders vocalist and guitarist Adam Bairstow, as they mesh their musical talents together.

The gritty track ‘Am I Okay’ certainly deserves a special mention. It follows heavily on the heels of the recent shift in the discussion of mental health and is much needed in the modern age. It was the band’s fourth release before their album was released.

On ‘Am I Okay’, the band stated that “it is the newest song on the album, and was born during the first recording session for Fragile Skeleton. It covers possibly the most important topic in this day and age, mental health. It’s a reflection of the struggles of it underneath the surface and the way we, as individuals, hide it on the surface”.

Alan Raw of BBC Introducing Humberside stated that their sound embodies “Monstrous riffs, mammoth melodies, I love it.” Throw in their personal touch of a psychedelic element, and you’re left with an album which could only be made by them.

Final track ‘If This Is the Way It Is’ is the softer, slower and more melancholic older sister of the album. The lighter touch on guitar and drums match Lilley’s vocals well, leaving a more transcendental and ethereal feel. The last words on the track “I hope someone can help me fix it”, leave us with the sense of the band yearning for completeness, however, the band will surely find it in the success of this album.

Their latest offering is a great indication of what this band is capable of and suggests that we should always expect the unexpected. They’ve got big things in store for this upcoming year, from further releases to new gigs to showcase their growth as a band.

Get your tickets for Bloodhound’s upcoming shows here.

Be sure to keep up with Bloodhound: