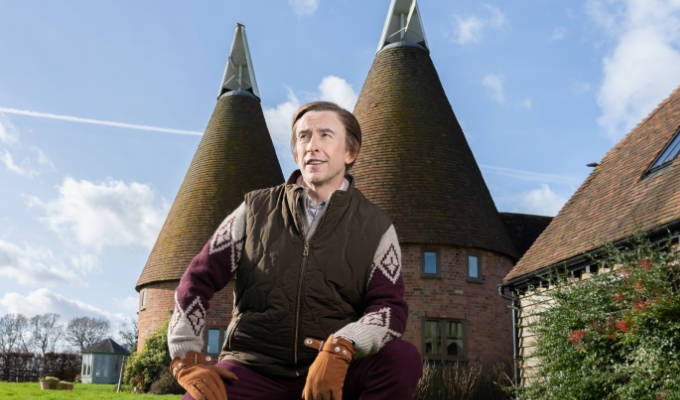 We are all used to seeing the cringe-worthy Alan Partridge fumbling his lines and insulting the world on television. In From the Oasthouse we get to experience Alan Partridge in a new yet familiar way. The podcast is almost seven hours long and consists solely of the audio recordings of a rambling man locked away in his replica oast house.

What is an oast house you ask? It’s a building in which hops are dried for the beer brewing process, something that screams Alan Partridge. It all makes perfect sense really, Steve Coogan first premiered the character on the BBC Radio 4 program On the Hour (1991) and for the bulk of his character’s career he has been a radio host. It seems only natural that Alan Partridge should fly full circle and stake his claim into the ever-expanding world of podcasts. It is almost if throughout the near 30 years we have enjoyed Coogan’s character it was always leading to this point.

Before reviewing the podcast, lets remind ourselves of the evolution of Alan Partridge the character and how he has arrived at this point. As previously mentioned, we first got a glimpse of Partridge on the radio show On the Hour – a spoof of British current affairs broadcasting, where he featured as the comically calamitous sports presenter. During this period Alan also got his own radio show Knowing Me Knowing You – a six-episode parody of the popular chat show format.

Following the popularity and success of both, On the Hour was reimagined as a television program The Day Today which first aired in 1994. The show was shortly followed by a televised season of Knowing Me Knowing You. The character from here continued to snowball and in 1997 Coogan had landed two seasons of an Alan Partridge sitcom I’m Alan Partridge.

The series suited the era well however the ‘canned laughter’ and general sitcom aesthetic would struggle in today’s comedy market not to appear cheap. The character of the early 90s to the turn of the century differs stylistically to the Partridge we enjoy today. These earlier outings written by Armando Iannucci, Peter Baynham and of course Steve Coogan. The Baynham and Iannucci era of Alan Partridge relied on broader and more obvious cringe-worthy moments than the comedy in From the Oasthouse as well as featuring a down on his luck and somewhat downbeat Alan Partridge.

After a brief hiatus Alan Partridge made a comeback in 2010, this time with brothers Neil and Rob Gibbons as writers. A feature film, mockumentary and two television series followed all with great success and plaudits. The Gibbons brothers have revamped the character to appeal to modern audiences, he is quirkier and more subtle in his cringe inducing antics but still just as entertaining, if not more. Therefore, with the character seemingly so adaptable to modern formats it was only a matter of time before the North Norfolk disc jockey released a podcast.

The podcast, without giving too much away is an entertaining dive into the psyche of Alan Partridge, completely unfiltered and not bound the guidelines and regulations of television or radio. From the Oasthouse is pure unadulterated Partridge. The aim of the podcast was for Alan to address his internet troll who has been abusing him on Twitter with suggestions only he could find damaging: “I saw Alan Partridge in Asda […] people will try to destroy you!”.

Despite the initial aim of the podcast, it soon erupts into almost seven hours of Partridge-isms and rambling rants, unrelated to his initial plight. Listeners will also enjoy his interactions with neighbours, Uber drivers and even his mad dog, Seldom.

From the Oasthouse: The Alan Partridge is Steve Coogan at his best, with Partridge as out of touch as ever, proving the character can stand its ground in the growing world of podcasts. If you are a fan of the Gibbon’s era snippy and sanguine Alan then you will enjoy this podcast.

From the Oasthouse: The Alan Partridge Podcast is available from Audible now.