You are here: Home / Culture / Manchester / What to expect at Bongo’s Bingo Manchester 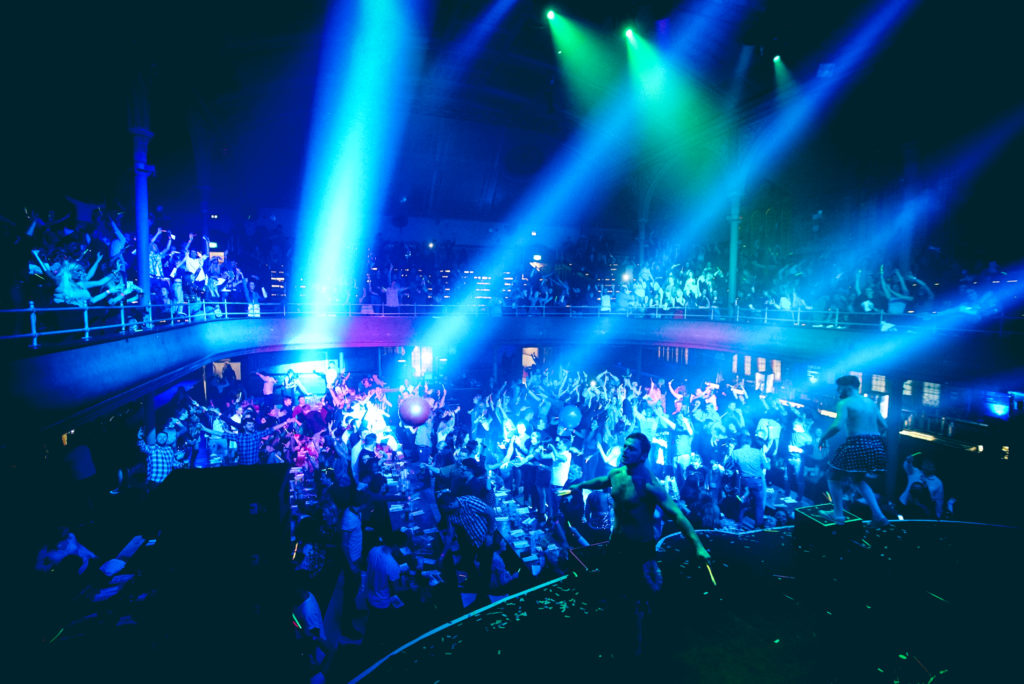 The stunning Albert Hall is home to the city’s favourite, bonkers party. Tables and benches line the path to the stage, which quickly become mini stages of their own as guests sing, dance and rave their hearts out to classic bangers including Whitney Houston, Blackbox and Bewitched.

Seating is first come, best served. It’s definitely recommended to get in early and set up camp with your mates to secure a good raving spot. The area on the ground floor is a firm favourite, but the buzzing atmosphere stretches right to the back rows of the balcony and you’ll still get a great view, regardless of where you’re perched. You’re not going to be in your seat much anyway.

Then there’s the bingo. Yes, you are actually going to be playing bingo. As the rules are explained, music is booming, and you’re introduced to gyrating hosts in questionable milkmaid outfits, it’s easy to question whether you can feasibly play bingo in this chaos, but trust us, it’s taken very seriously. And the prizes are very real.

As the first game starts we’re offered up a life size cut out of Dermot O’Leary as the prize for a line. Two lines will get you a retro spacehopper and a full house bags you £50. With the prizes increasing in novelty and monetary value, the excitement builds and mistakes are made. A false call here will get you in trouble. If you do make a false call – which tend to come from early show-offs followed by genuinely innocent players who’ve got too tipsy and lost their way between playing for two lines or a full house – you’ll be christened a “dickhead” by the hosts. Every single person in the room will want to know: “Why you always lying?”

Winning a mid-round karaoke machine will make all your 2002 dreams come true as you’re invited to belt out The Killers “Mr Brightside”. Then there’s dance-offs, splitting winnings with new found besties and making it rain with Coco Pops. This night really has it all.

Bongo’s Bingo is the perfect mix of nostalgia, chaos, cringe and fun. Where else can you win a Henry Hoover, belt out a song to a packed live audience of and get an Uber home with a giant fluffy unicorn?

You have to see it to believe it, but for us, it’s clear why it’s becoming one of the most popular nights out in the UK.