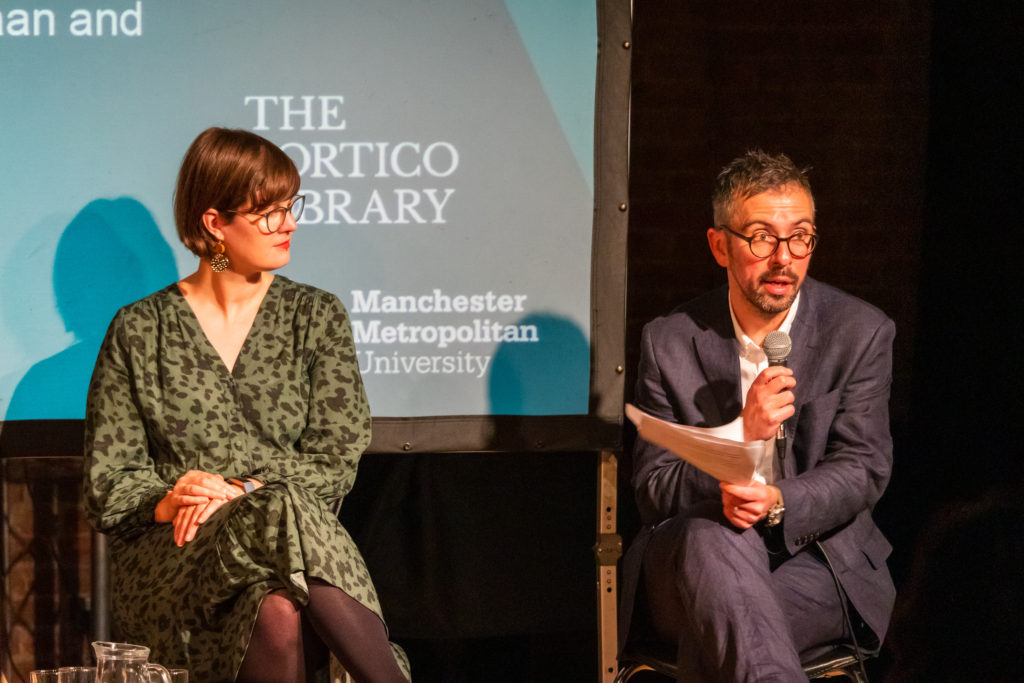 ‘What does it mean to be a writer in the North?’ Three panel speakers together with Manchester Met senior lecturer Dr David Cooper try to answer that question with a discussion of the longlist of 17 authors nominated for this year’s The Portico Prize.

The celebration of this year’s longlist takes place in an impressive industrial building of the International Anthony Burgess Foundation organised by The Portico Library in a partnership with Manchester Metropolitan University.

With Dr David Cooper chairing the discussion, Faber published poet Rachael Allen, award-winning screenwriter Kamal Kaan and the Director of Collections and Research at Gladstone’s Library Dr Louisa Yates talk about the works that best captured the spirit of the North. But most importantly, it’s a discussion about works they’ve read and loved.

The Portico Prize has a long-established tradition in Manchester since 1985. This year, the judges will award £10,000 to literature that ‘best evokes the spirit of the North’. It announced a new partnership with Manchester Metropolitan University, including a series of events called ‘Rewriting the North’.

Senior Lecturer in English at Manchester Met and director of the department’s research on Place Writing Dr David Cooper, is in charge of the cooperation between the university and The Portico library.

He says: “We always worked with Portico Library in a way but this is a sort of new partnership and it is very meaningful. We hope that this is one of the many events we’ll cooperate on. One of our Creative Writing PhD students and a graduate are on the longlist as well.”

Dr Cooper believes the current social topics have also had an impact on this year’s longlist.

“What’s special for me is that there’s something about this moment, which is making people think a lot more about their relationship with a place. One of the reasons is naturally Brexit and the questions of nationalism and regionalism, and what they might mean,” he adds.

All the longlisted books are presented at the discussion. The variety of genre is remarkable – fiction, non-fiction and poetry literature works all competing for the Prize.

Poet and editor Rachael Ellen is one of the members of The Society of Readers and Writers who determined this year’s longlist. She says it feels like an honour to judge a prize, as this is her first year of involvement.

She explains: “I was quite surprised by how much respect and reference it has been given. Some of the more interesting works that I’ve read came out from people that may have been from the north but had different origins. That’s why it’s great to have more open criteria.”

She also points out the fact of how much innovation was put in the books she’s read.

He adds, “You have to resilient if you live in the north, also because the weather is so terrible. But that kind of resilient spirit was going through several different phases, like in cities such as Bradford where I come from. It has lost its textile industry in its 80’s and struggled to find its identity. People partly lost their spirit of what it was being a Northerner.”

Although Kamal has lived in various places in England, he points out the fact that Northern England has been his greatest source of work.

“To find that lost spirit again is often about a shared experience, whether that’s art or literature. So, the spirit of the north for me is about a shared connection with each other.”

Throughout the discussion, each speaker offers an insight into how they unanimously agreed on the longlist choices. Additionally, they speak about the use of humour as a common feature of the Northern authors. Rachael says there was a reflective awareness of North in the writing as much as realistic optimism.

Panel speaker Dr Louisa Yates, adds: “Even though some of the books were on grim topics, we were all cheered and it was a genuinely uplifting experience to read these books and to live these narratives in people’s eyes.”

After the discussion, guests are given the chance to have a chat with one of the longlisted authors – novelist Glen James Brown whose debut Ironopolis was published last year. He describes previous prizes winners inspirational writers and how he thought his book might be able to fit in here. According to Brown, it is impossible to define Northern identity.

“There are seventeen books here, but overall, I think there might be even two thousand books who have a different idea of Northern identity. All you can do is have an idea and do the best you can.”