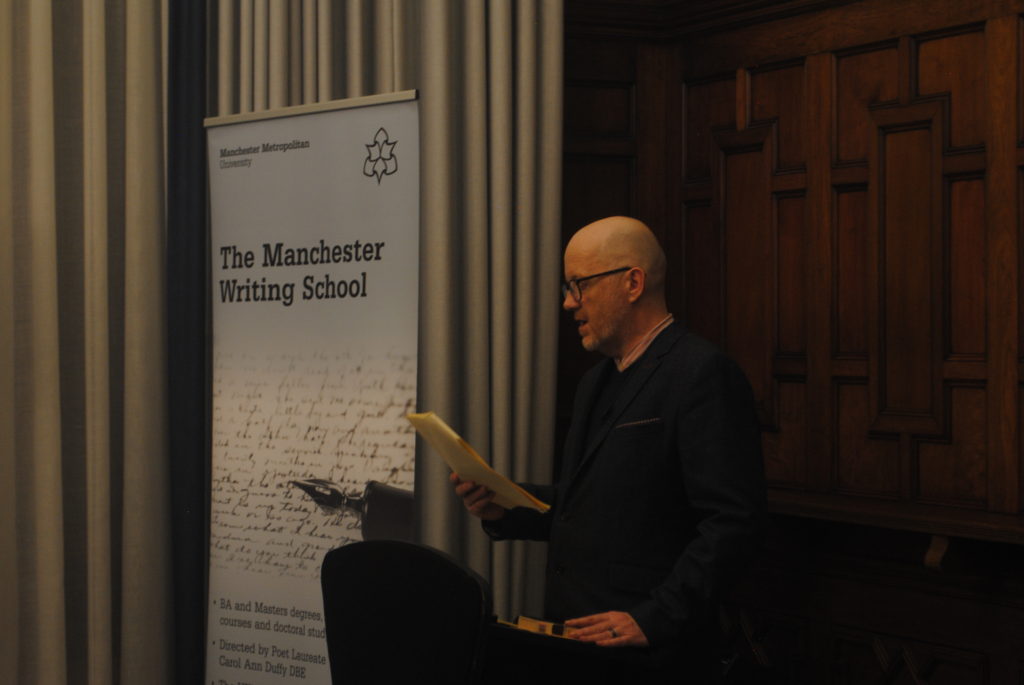 “The lectures are the Writing School’s way of telling Manchester ‘We love you’,” said Poet Laureate Carol Ann Duffy, as she introduced the second of The People’s Poetry Lecture series.

Taking place in the stunning Principal Hotel, the lecture was a celebration of poetry, featuring Manchester Met’s Professor Michael Symmons Roberts, discussing and honouring the late W.H. Auden. According to Duffy, Roberts’ collection, Drysalter, won “just about every poetry award known to man… and woman.”

Opening by discussing the admiration Auden received from his contemporaries, Symmons Roberts explained the somewhat peculiar fact that poet Dylan Thomas had a picture of Auden on his wall: “There’s nothing odd about having great poets on your study wall. I’ve got a few on mine. But the odd thing about Dylan Thomas having Auden on his wall is that they were near contemporaries. Dylan was just seven years younger, so they went to the same parties, read at the same festivals. Now, much as I love my contemporaries, I can’t imagine sitting down to write a poem with the face of one of them staring down at me.”

Thomas was stated to have said that Auden was ‘the most skilful of us all, of course’ – and that statement was at the heart of the evening’s talk. Symmons Roberts aimed to shed light on why Auden’s talent was assumed to be so huge that he earned the ‘of course’, and his investigation began with his love poems.

His first reading of the night was Funeral Blues, a poem which gained renewed popularity after being used in the 90s rom-com Four Weddings and a Funeral. “The film was popular, but that poem brought the house down,” said Roberts. He joked, “It didn’t go viral, because the 90s was another country.”

It did, however, do the pre-internet equivalent. Symmons Roberts explained, “So many people, who had never bought a book of poems, wanted a copy of this one that Auden’s publisher had to produce a special edition pamphlet with the poem in it, which was stacked on bookshop counters to cater for this new audience.”

But why did it have such a strong effect? Symmons Roberts believes it was due both to the strength of the script and performance, and the fact that at the time, it was “still rare for a mainstream romantic comedy to portray a gay relationship so centrally and powerfully. I think Auden would have been proud of that, because the power of that scene is mainly due to the poem.”

“It has all the hallmarks of Auden’s genius: a deceptive simplicity of form – the full rhymes and the blend of everyday details with expansive sweeping images. As Auden’s love poems often do, it risks strong emotion.”

While many poets would avoid use of strong emotion for “fear of lapsing into sentimentality”, Symmons Roberts believes that Auden’s skill in knowing when to take that risk was one of his great gifts. As the third stanza ends with ‘I thought that love would last forever: I was wrong’, not only does he take that risk, but the poem also “shows another of Auden’s great gifts too – his ability, rare among even the finest poets, to conjure an instantly memorable line”.

Discussing his own first encounter with Auden’s work, Symmons Roberts said: “I’d like to say I opened the book and was transported, converted from the first poem on. But it wasn’t like that.” Lines here and there in Auden’s work interested him, but one in particular stood out.

“One line from the poem First Things First, which ends with ‘Thousands have lived without love, not one without water’. I loved the musicality of ‘lived’ and ‘love’, ‘thousands’ and ‘without’, ‘one’ and ‘not’ and ‘water’. It seemed like a line that pre-existed its composition. It was so perfect, it had to be that way.”

Descriptions such as these from Symmons Roberts reminded the audience that, as well as discussing a genius poet, he was brilliant at crafting words and phrases himself.

Despite all of Auden’s talents, he had his faults. “For all his self-critical rigour, Auden – like the equally fastidious Marianne Moore, who cut some of her best poems to ribbons – could be an excessive re-drafter, editor and censor of his own ideas,” said Symmons Roberts, discussing Auden rewriting a line from his poem September 1, 1939. Wishing to change ‘We must love one another or die’ to ‘we must love one another and die’, he attempted to restrict the poem’s publication. But it got away from him.

“September 1, 1939 wasn’t the only Auden poem that slipped beyond his control,” explained Symmons Roberts. “Some of you may know that Funeral Blues was originally written as a piece of satire, a comedic over-the-top gesture of mourning for a deceased tyrannical leader. Auden produced a cut and revised version under the title Funeral Blues, and allowed it to flourish in that form. I guess he concluded that if people found it meaningful as a personal elegy for a lost loved one, then that had some integrity.”

When asked by an audience member which of Auden’s collections would be best for best for a reader new to his work, he replied with an interesting thought.

“I was discussing earlier the idea of how much a poet writes in their lifetime. There was a famous statement about the difference between really major, great poets and the very good but not great poets. The thesis was that the great poets usually write too much, so there’s usually more bad stuff in the collected works, but they took more risks and the overall body of work is greater and the best stuff is better. There’s something interesting in that about risk taking.”

Finally, Symmons Roberts reminded us that taking risks was something that Auden most certainly did. “He risked collaborations – in opera, with film-makers and radio producer, with other poets and artists. Not all of these were great successes. He felt a responsibility to work diligently, to write a lot in multiple registers and forms and voices. But like any artist, his failings are part of his genius.”