You are here: Home / Music / Live Review: The Pale White and Ten Tonnes @ The Deaf Institute 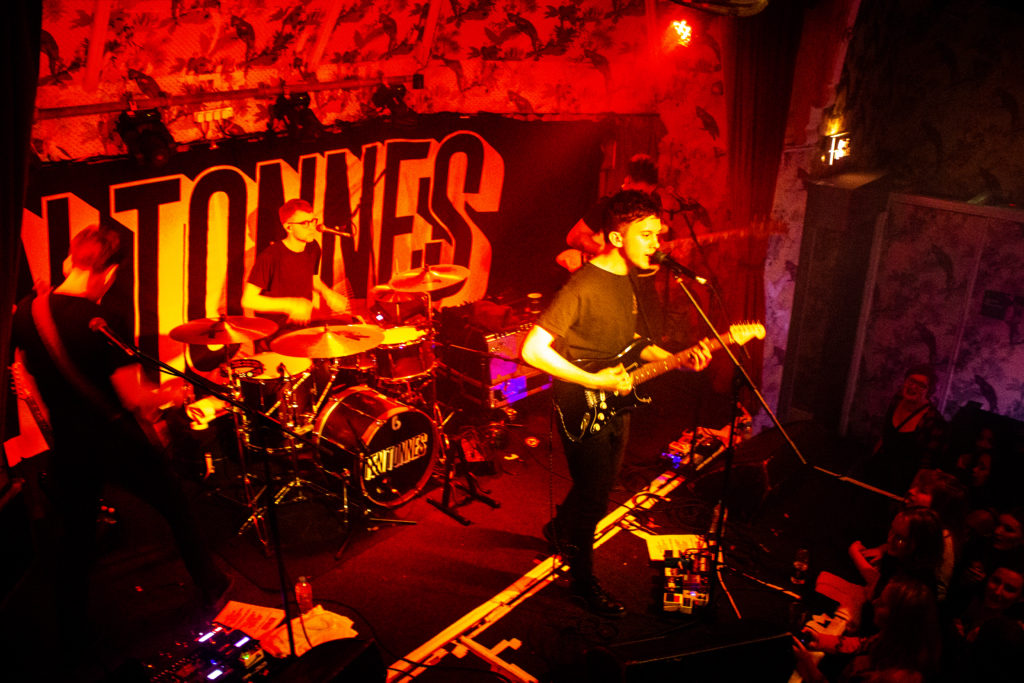 The Deaf Institute provided the perfect stage to welcome The Pale White and Ten Tonnes to Manchester. A small venue without a barrier with a decadent glitter ball, it foreshadowed the up-close and high-quality performances that were about to be undertaken. The obvious energy was high before a musician had even set foot on stage.

The Pale White, a three-piece band from Newcastle consisting of vocalist and guitarist Adam Hope, his brother and drummer Jack Hope, and bassist Tom Booth, were the first and only support of the night, and had a full house to impress. Known for their smooth riffs and crashing drums, they more than delivered off the bat with their opening song, ‘Wisdom Tooth’. Adam Hope and Booth used the space on stage to their advantage, with Jack Hope banging his head into a frenzy on the drums – it was clear that the band collectively put all of their energy into their music. The crowd were only too happy to feed off it.

Hope used a smooth guitar ride to transition into ‘Turn It Around’, another of their hits. The audience bobbed to the beat of the chorus, egging on the band to increase their game. By the end of the song, the catchy riffs and beat were accentuated by Jack Hope’s fellow musicians brandishing their instruments in the air and turning away from the audience to deliver their dirtiest riffs. Encouraging the audience to clap to the beat in ‘Panic Attack’ and ‘Loveless’, they invited them to attend their return to the Deaf Institute on the 1st of March.

‘Medicine’ saw the return of the hard riffs with the audience headbanging to the beat, which bode well for the transition to ‘That Dress’. The centre of the audience was particularly responsive as Adam Hope projected his voice well while jumping up and down to the music, and Booth continued to deliver. ‘End of Time’ brought their set to a close with the crashing cymbals for which they have quickly become known. The riffs were particularly powerful and rattled your bones, as only a good live set can achieve. Between their continued high energy on stage, Adam Hope kicked the setlist away from under his feet, as nothing was stopping them from leaving a lasting impression on the crowd. This commitment to the show was shared by Jack Booth, who by the end of the set was standing on his stool, all of his instruments crashing into a final crescendo before fading into a reverberating drum roll.

Ten Tonnes (Ethan Barnett) may only be 22, but his performance suggested experience beyond his years. Whether it’s his tendency to drink Yorkshire Tea during his set or his boyish charm, he’s certainly putting his own spin on what an alternative artist should be. ‘Sweet Caroline’ announced his arrival onto the stage, and the audience roared as he shouted “Hello Manchester!” His set was a treat, showcasing old and new songs which appealed to all.

‘Born to Lose’ was the obvious choice to kick off the set, and the crowd barely needed any encouragement from Barnett to clap along, escalating to cheering during the excellent instrumental. Even Barnett noticed the willingness of the audience to interact. shouting “what a start!” This enthusiasm carried through not only to the well-known hits such as ‘Cracks Between’ and ‘Silver Heat’, but also to new releases ‘Too Late’ and ‘Counting Down’. ‘Too Late’, a catchy, blues-rock masterpiece, will almost certainly be a hit.  The audience lapped it up, singing “too late, too late, too late” with Barnett as the drums picked up. ‘Counting Down’ also features more of the catchy lyrics we’ve come to expect from this new era of Ten Tonnes’, as he crooned and serenaded the audience with the line “counting down the minutes ‘till I see you next.” The band easily succeeded in getting the audience to clap along, as they happily obliged. Despite the small venue, a small group in attendance took it upon themselves to start the first of several attempted mosh pits throughout the set. As ‘Counting Down’ finished, Barnett reminisced on his first gig to an audience of 3 people, which really indicated how far Ten Tonnes have come.

‘Silver Heat’, another tried and tested favourite, was next on the setlist. With Barnett’s enigmatic gestures to the audience and their screaming overlaying the beating drums, it was clear the show was going well. It was followed by another golden oldie, ‘Love Me To Death’, introduced by Barnett as a track about a relationship with “someone you love and can’t live without, but does piss you off.” Barnett was left on his own, as his fellow band members departed and he brought out an acoustic guitar to slow down the set, showcasing his vocal talent and emphasising the intimacy of the venue. He implored everyone to put an arm around their special someone and use their phone torches to light up the venue, transforming the room into a planetarium. By the end of the song, he had particularly won the heart of one audience member, who seemed to act as the spokesperson for all, shouting “we love you!”

The introduction of ‘Lay It On Me’ caused the audience to cheer in recognition, and work up to a small circle pit. As the lights dimmed during the verses, it drew all eyes to the performers as they then launched into the chorus. The crowd’s interaction was duly noted by Barnett, as he couldn’t help but exclaim that Manchester was “so great and loud!”

‘Look What You Started’ offered another taste of the new album. The energy exuded from ‘Lay It On Me’  carried on into this new hit, which quickly warranted the return of a circle pit in response to the powerful riffs and drums. Following this successful response, Ten Tonnes also took the opportunity to announce that they would be performing at Manchester’s Gorilla in May. Judging by the reaction of the crowd, it was safe to say that many of them will be returning then.

Next track, ‘G.I.V.E’, provided a quintessential example of how dedicated Ten Tonnes’ fanbase is, as the song only needed to be introduced as being “the song with dogs in the music video” to instantly be recognised. Add the various mosh pits, circle pits and raucous clapping, and it became clear that the group had plenty of reasons to exchange looks of triumph as they kicked up the beat for the catchy chorus. The enthusiasm carried into the penultimate song, ‘Better Than Me’. It may be Ten Tonnes’ most recent release, but this didn’t stop the die-hard fans from singing to every word, as they clapped along to beat carried by the electronic drums and guitar.

As all good things must come to an end, Barnett announced that they had reached their final song of the night before launching into crowd favourite, ‘Lucy’. It seemed that nobody wanted to forget it,  as people’s phones quickly cropped up around the room to capture the last few minutes of Ten Tonnes’ set by photo and video.

As the end of the song neared, the energetic crowd continued jumping, leaving the band members to exchange looks, seemingly content in the knowledge that they really had outdone themselves. As the riffs were cleanly executed and Barnett crooned “Lucy” for the final time, all that was left for him to do was to thank everyone for attending. In return, the crowd reached up to him, arms outstretched, to which responded by asking if they could take a photo with hands in the air.

Whether the show’s success was measured by the clapping encore or by the selfie immortalising the night, it was obvious that this had been a show to remember. Grab your tickets for The Pale White’s and Ten Tonnes’ next Manchester shows – you really won’t be disappointed.