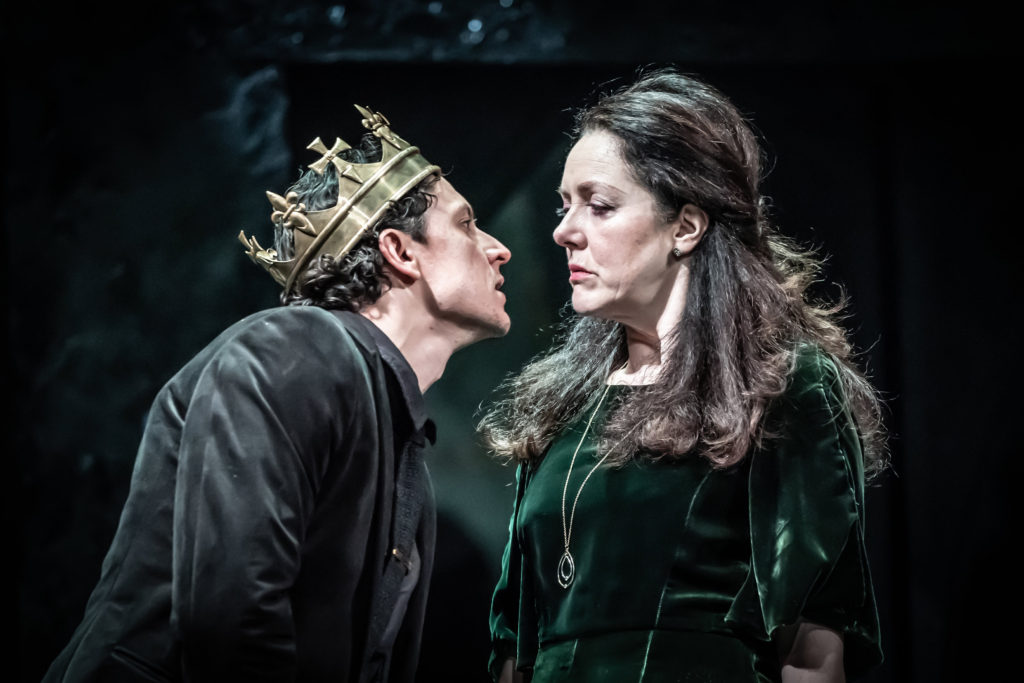 The claustrophobic set of Richard III is unnerving from the get-go. A sense of anticipation hangs over the theatre, as a lowly crown hovers centre stage, prophesying the turmoil soon to come, and a semi-circle of mirrors shimmer across a dark, foreboding backdrop. The twisted journey into the mind of a murderous King is about to begin…

John Haidar’s production is characterised by smoke and mirrors, fitting for the deviancies of Richard and the paranoid, feuding nobility. Mirrors were also, apparently, a prop favoured by Shakespeare himself, and they work well. The characters are continually reflected in different angles across the stage, their every fleeting movement and expression always visible – nobody’s intentions are ever truly kept secret from each other, or from audience.

The set is nightmarishly adaptable, made to emphasise the emotional and the psychological. Often, Richard’s victims come back to haunt him in ghostly, ethereal sequences, whilst glitching red lights flash as knives reach their targets and a top floor opens, ominously, to reveal the King’s throne. These delightful features are strangely absent, however, during scenes of courtroom bureaucracy, which are sometimes sluggish, making it difficult to know where and when certain events are taking place as a result.

Several of the death scenes are also obscure, and some more dramatic than others, though this may be a reference to the mystery surrounding Richard’s bloodthirsty legacy, especially regarding the princes in the tower. In a sense, the series of torturous emotions that the characters express in response to the killings are far more intriguing than the killings themselves. Their downfall is swift as the hysteria quickly stacks up.

Tom Mothersdale’s performance is captivating. Hunchback Richard is painfully bent on one leg as he spits and sneers; callous and witty in his velvet jacket, a little reminiscent of Heath Ledger’s Joker. He is “deformed, unfinished”, and we watch as Richard, under clinical neon lights, sinks further into the depths of his own harrowing mental state.

The most memorable moments of the performance concern the individual relationships between the characters, such as between Richard and his love, Anne (Leila Mimmack), which is stellar, if a little short-lived. Elizabeth (Derbhle Crotty) and the Duchess of York (Eileen Nicholas) offer much-needed intimacy in a play that focuses heavily on anger, especially when York fights tears to mourn Richard’s evil – “there was a Richard, until a Richard killed him”.

Stefan Adegbola steals the show. Buckingham’s charming back and forth with Richard and the Princes and his devilish schemes, veiled behind overwhelming optimism are delightful to witness as they unfold, and truly expose Adegbola’s range.

Headlong’s production delivers a hallucinogenic portrayal of Richard III’s mind, one that, much like insanity itself, descends slowly into pandemonium. The acting is phenomenal, and the set is equally as horrifying as it is brilliant. In deciding between an emphasis on the psychological or the political, Haidar chooses the middle ground rather than, perhaps, taking some bolder decisions that would complete the truly twisted form that he’s seemingly aiming for. But, Richard III is a haunting take on Shakespeare’s classic that promises to surprise, and disturb.

Richard III is next set to come to Oxford and Northampton. Tickets can be purchased here.