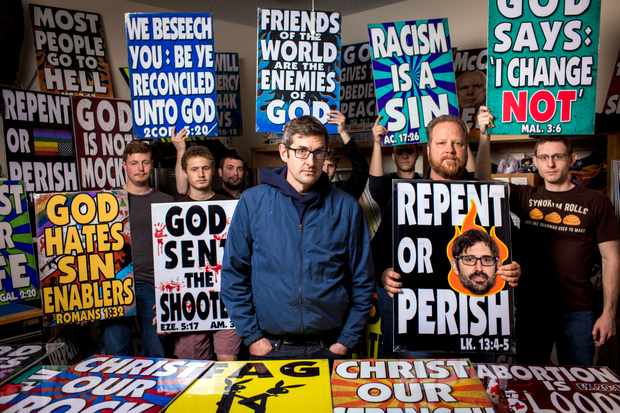 Having previously documented the small church in previous installments in 2006 and 2010, Theroux was no stranger to the church’s vitriolic rhetoric. The church is clear on where it stands, and lets the world know about their beliefs when they turn out to protest funerals. Their signs, featuring messages such as ‘God Hates America’ and ‘America Is Doomed’ being among their tamest, are synonymous with a hatred that has turned the divided nation of America squarely against them.

This documentary sought to look at the vulnerabilities of the church. Theroux spoke to former members of the church, who had been exiled upon recanting their beliefs, and learnt of the circumstances that led to them turning their backs on all they’d ever known.

Of particular focus was Megan Phelps Roper, the grand-daughter of the church founder Fred Phelps. Megan speaks to colleges across the USA, offering her insight on how to reach radicalized individuals. With her TED talk garnering 4.5 million views on YouTube, she’s clearly a voice many believe has a unique perspective.

Theroux’s line of questioning in the documentary also sees current church members get agitated with him, and the hour-long program is not without its tense moments.

It was particularly surprising to me, as somebody who has long been familiar with the church, to see the church members show such vulnerability.

Shirley Phelps Roper, the church’s most infamous member who often appeared as their representative in the media, is seen clearly within the documentary as a wounded woman. Three of her children have left the church, and by the standards of her faith, she can no longer see them. To witness her on the brink of tears in front of Theroux made her seem wholly different from the woman who would usually be leading her church in protest.

Theroux’s trilogy of documentaries show the gradual breakdown of a insulated church that views the outside world as evil and wicked. I wouldn’t be surprised if he still has enough material for a fourth installment.