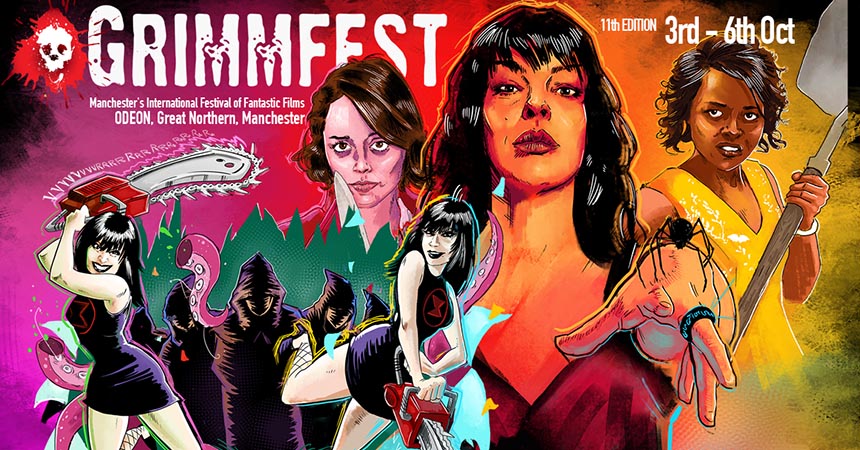 Grimmfest is one of the UK’s leading festivals for independent horror, sci-fi, extreme fantasy and cult film. It took place this year at Odeon Great Northern in Manchester, between 3rd and 6th October.

Grimmfest 2019 was an intriguing event to review, with a programme full of amazing horror cinema. However, there was one question that had to be asked: how could an event with such a niche concept avoid becoming stilted or tiring over the span of four days? The only way to find out would be to judge the quality of the films on display and the energy of the audience, alongside the scope of talented directors who attended their screenings.

The first day blew any scepticism I had out of the water, as I was greeted by an incredible ensemble of films. All it took to spark my excitement for Grimmfest was the first film in the lineup, ‘Tales from the Lodge’ – one of the best British horrors I’ve ever seen. I loved every second of it and it left me wanting more from its brilliant director, Abigail Blackmore.

However, my excitement was only intensified by the evening programme, which proved the festival would be far removed from any superficial or overrated filmmaking. I left that night feeling optimistic about what the coming days would provide me with.

I was elated by the diverse and intelligent films that welcomed me on the second day, which didn’t just reside within the horror genre, but in thriller and dark comedy too. It made me realise that rather than just a series of cheap jump scares and loud noises, Grimmfest’s atmosphere was beginning to constitute a more Lovecraftian horror instead, focusing in on the darkness of our core human nature.

The film that stood out most to me on Friday was ‘Darlin’, by Pollyanna McIntosh, a brilliant criticism of the effect of religion in our society today. It made for uncomfortable viewing, a feeling which I relished for hours afterwards. If a film is able to truly unnerve the audience, it has done something right, and ‘Darlin’ will stick with you for a long time.

By the third day, I was practically skipping to the cinema, eager to see what was awaiting me. However, I hadn’t known a heartbreak like that day for a long time. I was crestfallen as film after film failed to match its predecessors. They were missing something – like they had been built from an instruction manual but there was still a screw loose.

I was terrified that I had seen all the best films already and was now being subjected to lesser productions. However, in the throws of my overtly dramatic mental breakdown, I finally stumbled upon a film of unique and fantastical proportions. It was as if a light had shined upon me and I had been graced with the film that would save the rest of the festival.

This was ‘Extra Ordinary’ by Mike Ahern, a film which left everybody in the audience roaring with laughter at its salacious and taboo humour, set deep inside a universe which spanned from minor hauntings to full-blown virginal sacrifices to the Devil. It was then I realised that although this festival may have its ups and downs, it will always include the best films you could ever encounter.

Sunday left me morose knowing that some of the most eye-opening days of my life were soon to be over. I hoped I wouldn’t feel cheated by the end. However, it seemed that Grimmfest had saved the best for last. I’m talking about the fantastic and absolutely award-worthy remake of David Cronenberg’s 1977 film ‘Rabid’, by the Soska Sisters.

These two were able to take a brilliant and almost impossible-to-recreate masterpiece and place a cherry on top of it. The film left me on the edge of my seat as it masterfully dissected the human psyche, revealing how we all intrinsically have a dark side to us. This was not to horrify, but to explore – much like looking under an old rock and seeing what lies beneath. The Soska Sisters have re-created a film that embodies the word ‘Schadenfreude’, deriving pleasure from others misfortune, and there is not a more realistic embodiment of such a condition than in the form of a cinema audience.

The festival only improved when the Sisters were presented with the Grimmfest award for ‘Best Lifetime Achievement’ in cinema. However, almost in the same breath they said they were considering turning their backs on filmmaking. To do so would be a loss for the entire film community, and I write this in response, not only to them but to all aspiring filmmakers: Grimmfest symbolises hope for anyone having difficulties with their chosen art form and should reassure them that there is a chance, as long as you try as hard as possible.

As I left the cinema for the final time on Sunday, I was mournful that I could not return – Grimmfest had constituted an amazing four days. I will always remember the feeling of community in the cinema, between people who truly support one another and who love nothing more than a good scare. You had better believe that I’m going back next year.