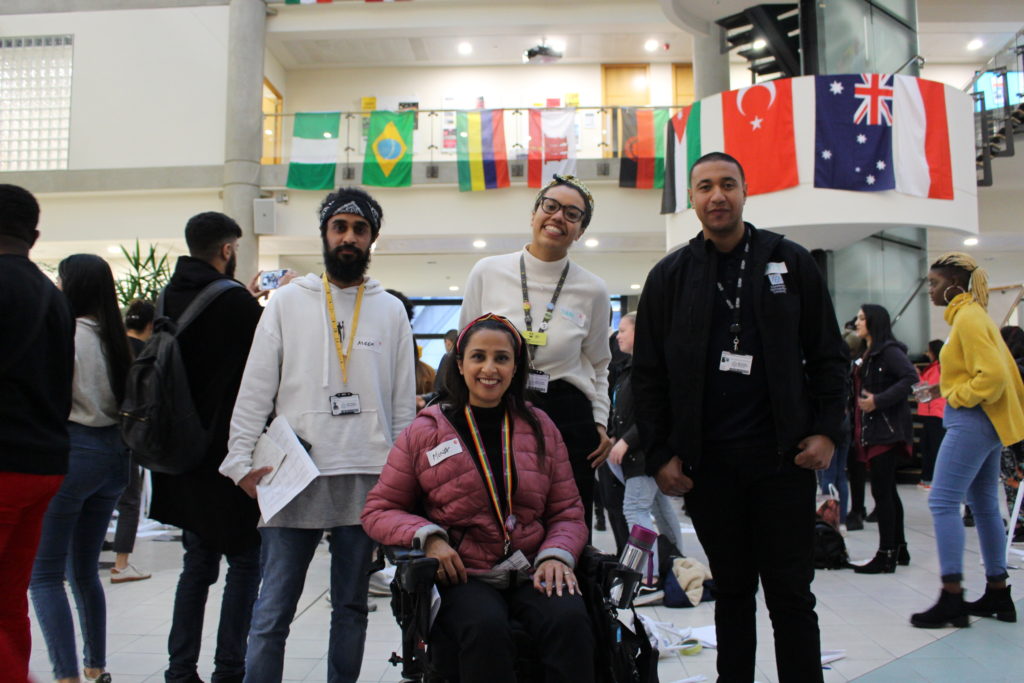 By Pruthvi Khilosia and Ben Thompson

Over pizza and drinks, students and staff from the BAME community discovered each other’s cultural backgrounds and ways they can have their voices heard.

Associate Lecturer in History Sami Pinarbasi, explained that he had come to the event because it was “important to meet more BAME students, and it’s important for staff to reflect the students that we teach”.

After the initial introductions, participants were divided into groups and given a rather unorthodox ice-breaker task – to make a ‘giraffe’ out of paper and tape, that could withstand the weight of a Kinder Egg. While this contest was ongoing, attendees helped themselves to halal pizzas provided.

Following on from this was a ‘Rock, Paper, Scissors’ contest, in which groups whittled themselves down until the two winners faced off in a head-to-head. All throughout this process, attendees were being encouraged to take each other’s contact details.

This style of event was a new experience for some students. Jade, a second year Tourism and Management student, told us: “At university, there’s not a lot of black people getting together to discuss things. There’s a lot of going out and clubbing, but not a whole lot of networking.”

The event also had the added benefit of bringing together different cultures. Jade added, “I’m doing my gap year in Thailand and I met somebody here from Thailand, who was telling more about it. This event is great for that sort of thing.”

The final activity of the evening saw guests dividing themselves into categories – ‘Night Owls’ and ‘Early Birds’, ‘Punctual’ and ‘Late’, etc. Once in different groups, they were given questions to ask each other, such as “If you were a candy bar, what kind of candy bar would you be?” or “If you could live anywhere on this planet and take everything you love with you, where would you choose to live?”

Azeem Lateef is the BAME ambassador scheme coordinator and was in charge of making sure the purpose of the event was successful.

“My whole role is about representation for BAME students. There’s a big attainment gap between people of colour and when people actually get to university,” Azeem said.

“People of colour are 36 percent less likely to get good grades as white people once they get there. There’s something wrong with the institution and there’s something that is wrong within the culture that is created within the university so it’s my job to bridge that gap.”

Azeem added that there’s a lot of different things that needs to happen to bridge that gap. There’s the bottom up approach from the students, where it’s up to them on how they want to be represented, and then there needs to be an institutional change from the top down.

He said, “Racism is very structural and it’s gained within the system so those things need to happen and it can be achieved through training, campaigns and is a big task because it is reversing 150 years of racism.”

Katie Mae Jones, a teaching assistant for the Graphic Design course who runs Fresh Magazine outside of Manchester Met, felt like the event was a triumph. As well as networking and feeling welcomed as a BAME student at Manchester Met, Katie’s past experiences allowed this event to happen.

“I did a foundation year here and three years doing Graphic Design ad in the fourth year of Uni I felt that I had enough,” said Katie. “When I stepped foot in the building, I felt that there is no one here that looks like me and it made me feel insecure and reflected badly in my work.”

She added, “It felt like the course I was on wasn’t the right one because no one looked like me, none of the guest speakers that came in didn’t look like me, so I kind of thought ‘enough is enough.’ If anything, it’s kind of a positive thing because it started the theme – I didn’t want first years to feel the way I did.”

Mona Patel is an equality and diversity specialist and is part of a team of three who make sure there is diversity, inclusion and equal opportunities for everyone from staff to students.

“I think it’s really important to see students themselves represented by staff and for staff to see that students are represented too. It helps relate to one another and it also helps to inspire as well.”

She added that this event is a step forward to getting BAME voices heard every day. She said “It is a great support mechanism. Students can sit and struggle and not be confident to raise an issue or to even celebrate an achievement, so this event helps us do all of that.”

“It’s really important that we all have a voice.”

Lisa Bach, a member of Manchester Met’s Outreach and Enrichment Team, ran the event and was positive about the impact it would have on BAME staff and students. She explained: “Research findings show that BAME students nationally have highlighted a lack of role models available to them. BAME specific networking sessions, such as the one we ran today, allows our students and staff who are structurally marginalised, to  find and create a community on campus with other students/staff who have similar experiences and can provide the peer-to-peer support.”