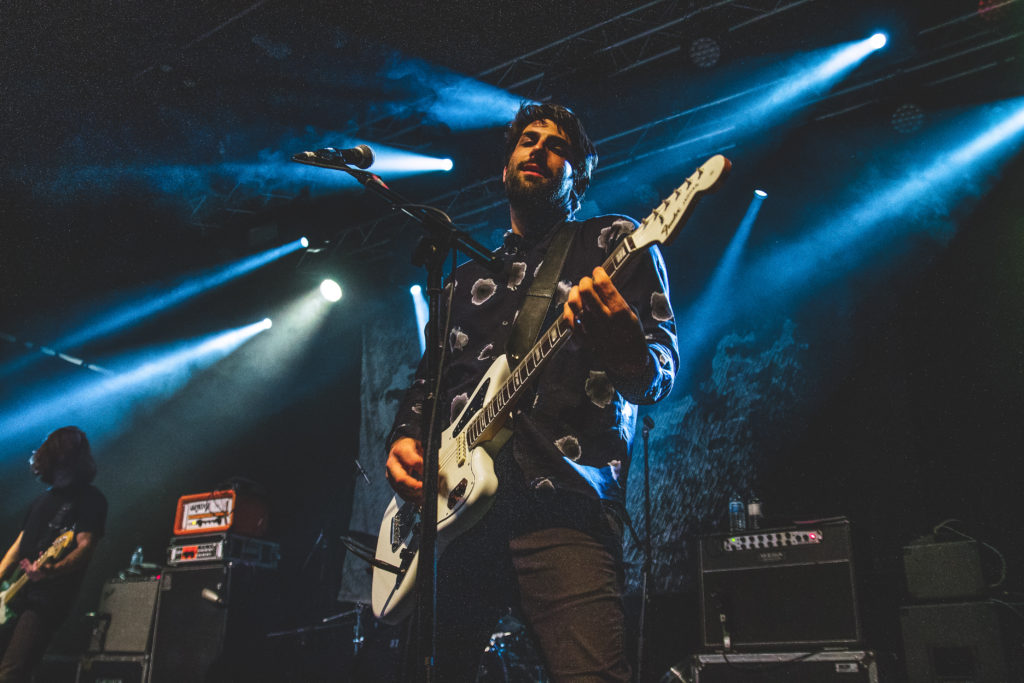 With this year marking the ten-year anniversary of Touché Amoré’s arguably most-loved album, ‘To the Beat of a Dead Horse‘, it would only be right for the California-based post-hardcore band to embark on a month long tour across two continents to celebrate.

Manchester welcomed Touché Amoré and close friends, Deafheaven, with open arms for a night to remember at Academy 2. Kicking off proceedings was Portrayal of Guilt, who have carved their names into the new era of screamo over the past two years. After recently releasing a split EP last month with post-punk band, Soft Kill, we were very much looking forward to what they had to offer in terms of their live show.

Whilst blending genres of hardcore, post-hardcore and punk, what stood out in their live performance the most was their musicianship and how they merged all these different sounds together on stage. Matt King’s vocals were deafeningly loud however, the crowd seemed to enjoy what they heard as when we looked around the room, everyone was banging their head in sync with the music, taking it all in. Due to the uncertainty of what order Touché Amoré or Deafheaven would be playing, fans from all sorts of music backgrounds turned up early to fill the room and were lucky enough to catch a glimpse of an impressive support act. Portrayal of Guilt definitely gained some new fans that night.

Next came Deafheaven, who were greeted with a simple loud round of applause which all seemed a bit too formal considering the tone of the performance we were about to bare witness to. George Clarke’s vocals conducted the performance of the band as well as the audience subtly. The contrast of Clarke’s performance being delicate yet belligerent on stage was something we had failed to have seen before.

Half of their set-list featured songs from their 2018 album, ‘Ordinary Corrupt Human Love‘, which all captured the attention of those hardcore Deafheaven fans in the front row, but it was Dream House from the album ‘Sunbather‘ which was released in 2013 that won over everyone in the crowd. The mass of people in the room showed nothing more than adoration for the band as they closed with this black metal (with hints of shoegaze) track.

With all the energy in a performance a member of a live show could hope for, Deafheaven played a set we would never forget, which is exactly what anyone would expect from a band which is spoken of with such high calibre.

Taking the headline slot for Manchester’s date of the co-headline tour, Touché Amoré gave the fans exactly what they wanted by playing ‘To the Beat of a Dead Horse‘ front to back. The set list not only featured songs from this album, but took the crowd through a journey that illustrated Touché Amoré’s longevity as a band. ‘Flowers and You’ in particular pulled on the crowd’s heartstrings from their 2016 album ‘Stage Four‘ in which the songs were inspired by the passing of Jeremy Bolm’s mother due to cancer.

Touché Amoré are honest, empathetic, loving and hopeful with their lyrics and the fans in the crowd soak it all up from start to finish. Although the tone of the songs could definitely be described as emo, this doesn’t stop the energy in the room as crowd-surfers and mosh pits set the revitalised vibe. Most-recent song, Deflector, proves to be well-loved by the whole room and shows that Touché Amoré are better than ever and have well and truly been welcomed back by UK fans.

Ending the set with ‘~’, the opening track to 2011 album, ‘Parting the Sea Between Brightness and Me’, was a nostalgic way to end the set as the crowd sang along ‘I’ll be the ringing in your ears, that will stick around for years’. We certainly know that this show will leave a noise in our ears, reminding us that next time we want to attend a Touché Amoré show, we should bring earplugs, because rumors are true, they are extremely loud.

This gig has shown hope for all post-hardcore/punk bands and we are looking forward to what Touché Amoré release next.