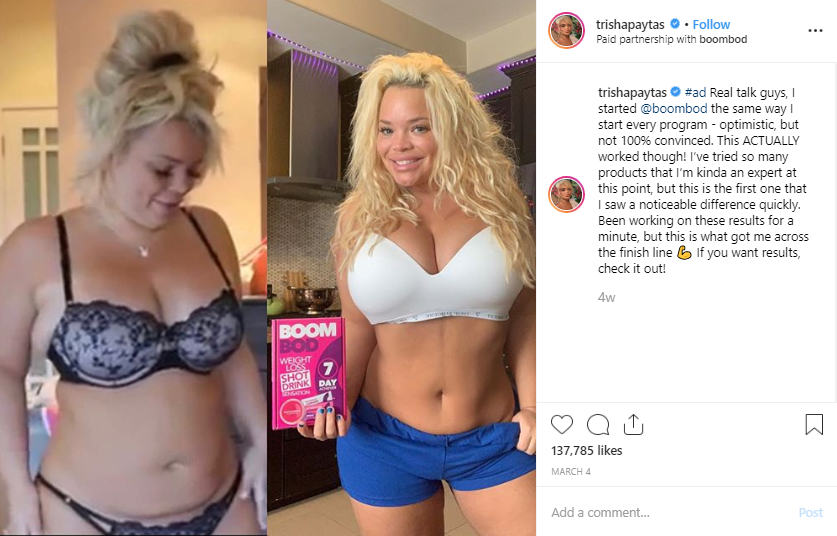 Does feminism mean supporting women “getting their coin” or calling out women who are profiting from others’ lack of self esteem? I think the latter – though this is arguably a controversial opinion.

Many feminists allow and often outright encourage women to take up sponsorships online so that they can “get their coin”. A lot of these sponsorships, however, come from companies that exploit women who are made to feel obliged to change or “fix” their appearance for monetary gain.

Anyone who follows any of the Kardashian/Jenner clan or any “influencers” on social media has probably come across “diet teas” (aka laxative teas) and “appetite suppressant lollies” (aka just lollies). These adverts often barely even look like adverts, and some aren’t labelled as such (which is another problem in itself), and so exert influence over unwitting browsers. We are all told that nothing on social media is real, but it is another thing to really emotionally believe it. Many look at Kylie Kardashian’s Instagram and believe what she posts, we believe that what our friends post on Facebook or Instagram is true, and at its worst, this can be deadly.

It’s not just ads that are toxic on social media, it’s the pictures people post of themselves. First of all, most if not all celebrities and “social media influencers” have injectables, surgery, and heavy skin care routines that make their looks unattainable and unachievable to the average person. Despite what celebrities and influencers would want us to believe, they don’t have special genes that make them look naturally youthful and flawless – it takes a village, which is why Instagram accounts that “expose” these people, showing “before and afters”, are vital. Seeing stark differences of pre-nose job Bella Hadid or pre-lip injections Kendall Jenner will show people that these people didn’t “wake up like this”. While it may seem unfair to call individual people out, it’s a step in the right direction for young people in particular to know that the images that they’re consuming aren’t reflective of reality.

Personally, I’m not against plastic surgery or injectables – adult celebrities can do as they please – but the lack of disclosure is an issue. Selling people a dream of achieving perfection by promoting harmful products like detox teas for a profit is undeniably wrong.

With social media influencers, it’s even more insidious, but there are some who aren’t quite so manipulative. Tati Westbrook, for example, is honest and open about the cosmetic work she has done, which is rare in the YouTube beauty community. With this in mind, it is easier to remain objective about her product reviews – any expensive foundation will look near-perfect on a botoxed, filled face.

Some decry these expose accounts as hateful, but criticism and hate are not one and the same. The people who run and support these accounts do not hate the people in question – they want them to do better. They want them to disclose the work they’ve have done. Some may argue that such things are private, but you trade privacy in to some extent when you make your body and image your source of profit. Unfortunately, however, it doesn’t seem that we’ll be seeing a rise in transparency any time soon, and so Instagram accounts showing people that what we see isn’t always what it seems will do for now.