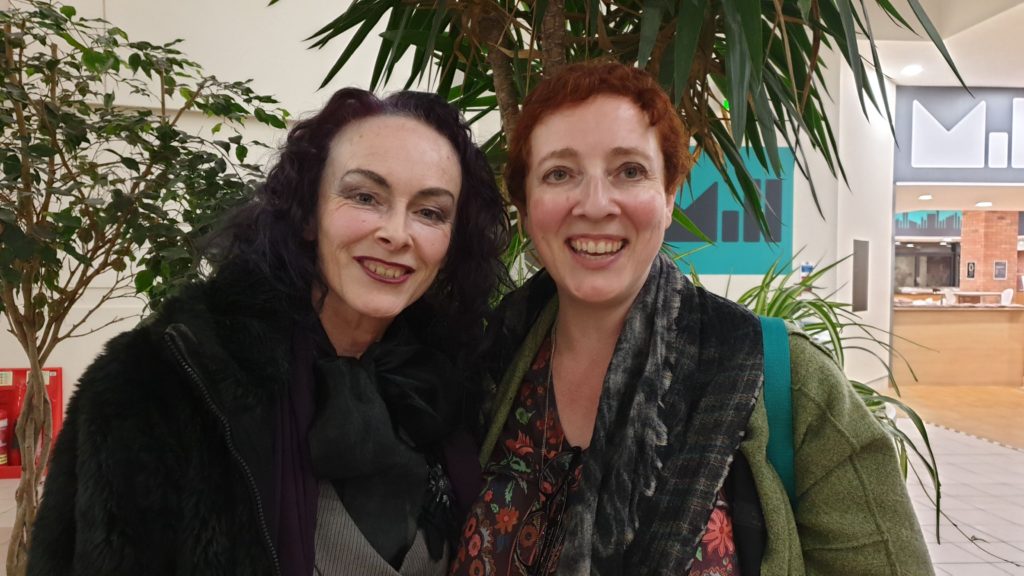 Words and Photography by Pruthvi Khilosia

Manchester Metropolitan University hosted the popular Mancunion Gothic writer Rosie Garland for a lecture as part of the Manchester Gothic Festival. The event featured readings from both Garland and curator of online blog ShortStops, Tania Hershman, who celebrates short story activity across the UK and Ireland.

Garland’s passion for reclaiming the term ‘Goth’ was prominent during the event. She explained: “There’s this long history of queer folk reclaiming words like ‘dyke’ and ‘puff’ and making them words of power.

Garland discussed how advertising is turning the Goth identity into a marketing scheme, an issue faced by many ethnic and cultural identities today.

“You may have noticed that this time of year, those cuddling mainstream types decide that they will be ‘Goth’. If I wasn’t a Goth, I would be called Rosie Ghoul-and,” she joked.

For many, Halloween is the season to dress up and hide who you truly are, but for Garland she fully embrace herself.

“I love this time of year, not just because I can go to the shops and buy things I want, but it’s so cuddly and sweet when there are adverts for Rimmel makeup saying: ‘Wow be Goth’. That’s nice.”

Garland believes that it is a privilege to be a resident of such a diverse city that hosts everything that “people need to feel at home”, adding she is the luckiest girl to be “adopted” by Manchester.

The way Garland has repaid Manchester for making her feel accepted is through her novels, especially The Night Brother, she added.

“[The Night Brother] is set in Manchester and it really is my love letter to this city. It is set in the 1900’s so that’s gothic Manchester of some totally different kind,” Garland said.

“In my novels, I don’t go for big long explanations. In my first novel, there is a character whose circus skill is that he would cut himself and immediately heal up – and that’s his act, ” she said.

“I thought that was an interesting way of describing a thing and exploring inside and outside worlds and how we regard ourselves as human beings. I don’t go into long explanations on how he can do this thing that can’t happen.”

She added that there’s no explanation of how the siblings Edie and Gnome [from The Night Brother] live their lives.

“I think genres such as science fiction have allowed that ability to tell stories. Integrate the present moment without it coming out as ‘I’m going to preach to you right now.’ I hate polemic,” Garland said.

The Gothic has acted as a refuge for things that don’t often fit into the norm such as ghouls and counts in medieval times, according to Garland, and Gothic Manchester today is the same but in a different way.

She said, “I guess I see the gothic as a quintessentially queer type of literature because it does deal with stuff that is out there and that doesn’t fit.”

Garland explained how her upbringing and individual persona brought her closer to this “refuge point”, which allowed her to realise that she doesn’t fit in with the norm. She added that she isn’t a part of the “compulsory heteronormativity” where the only option is to “get married and have 2.4 children.”

Garland discussed how society today is based on making firm choices and fitting into a social bubble to avoid discrimination. However, the Gothic quietly provides a refuge from that without being loud about it, such as old renovated spaces, nooks and crannies and secret underground meeting places – all uncanny places to meet and discuss things with likeminded people, Goth or not.

Garland said, “I’m not an academic so I can’t come out with the theory, but part of my coming out as a little queer when I was small wasn’t just about sexuality, it was about queerness in all senses of the term.”

She added that the excitement over how things can suddenly occur in the Gothic got her “tangled up”.

Garland said she thinks there aren’t enough novels about Manchester written by local authors set in the city, but that’s a Gothic statement in itself.

She said, “It’s like when you think about the black hole of London, around which is the world is supposed to rotate and give all its light and energy.

“I really think that it would be good if we broke away from that a bit more and think of the world in terms of other planets and not just the black hole in the centre.”

That concept alone is why The Night Brother was written to be based in Manchester, Garland said. She relishes the architecture and the people and their stories of the people in Manchester as well as the history of Manchester.

“That’s why my next novel is set in 1980’s Manchester because that for me is another time where the world was really difficult and s**t – and Gothic,” Garland said. “That’s my bit of Manchester.”

Tania Hershman added that Manchester was successful in doing its job as a Gothic city, that she feels welcome and is proud to be a writer that belongs somewhere for a change.

“It’s a real thing to think of myself as a Mancunian writer because it’s such a good community and like Garland, it’s been a long time since I lived anywhere that felt like home,” Hershman said.

“The minute I moved here it felt like home. I don’t think I write for me, always, I write to try things I need to say like to move through the world as a woman on her own. It’s not much talked about or written about so I hope that would connect to people.”

The Gothic always has appealed to Hershman. She said, “It’s that’s been mentioned by Rosie particularly that you know it’s there, it’s there in the essence.”

Amongst the audience was Sarah Heartland, a designer who belongs to the Goth community. “Nothing is a bad question or idea,” Heartland said.

“It’s really important and I think when they were speaking about ‘Gothic’ in the essence of being something that challenges the problems and questions we have now, I think it’s a way in.”

Heartland claims that people are scared of the unknown, hence why it is a culture frowned upon as well as judged. This is how people perceive others and their cultures – simply because it’s “different”.

Heartland claimed that open-mindedness and the act of accepting and questioning things should be considered in today’s society because of the array of cultures and progression in contemporary arts and culture.

She said, “I don’t think people realise the historic relevance of the Gothic. Its almost quite shallow and it seems like a scary Halloween type idea but digging a bit deeper.”

Garland is, like many other newcomers from far and wide, a proud member of Manchester because of how it was able to give her what she needs to feel home. She said, “Manchester is such a rich Gothic city. So, it’s part of the idea of coming from the outside and being acknowledged and celebrated rather than casting it out into the darkness.”

Hershman agreed with Garland and said she was very surprised when she moved to Manchester. She said, “The Gothic scene was revealed to me through Rosie. I had no idea there was so many levels of Gothic literature and so much studying – It’s really exciting.”

They finished by saying that Manchester has been a host to immigration, religion, race and social movement and has been able to preserve that through sustainability and equality. From architecture and Victorian remnants of the Gothic monochrome world to new cultural centres and social clubs, Manchester has made people feel welcome and able to find their own identity.