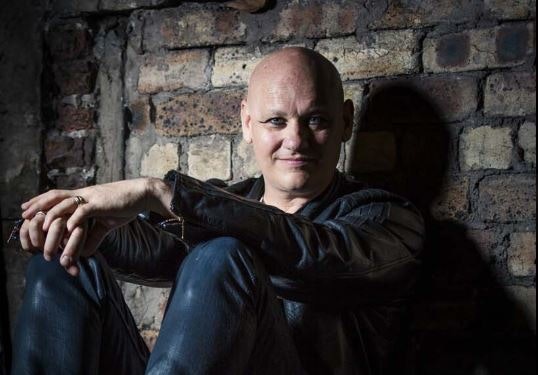 Headlining the Outside the Box comedy club, the unpredictable, award-winning comedian Terry Alderton took centre stage at the Garrick Theatre in Stockport.

A former goalkeeper for Southend United-turned-comedian, Alderton is described by The Times as ‘a mainstream act that dares to be different, that comes from the soul… effortlessly enjoyable and yet excitingly different’. His unique take on comedy has earned himself with the 3 Weeks Critics award as well as Best International Act at the New Zealand Comedy Festival.

Alderton’s approach to comedy is far from the norm, replacing conventional jokes and humour with a chaotic combination of physical comedy, musical outbursts and spot-on impressions and caricatures. Alluded by his bald head and dark, vivid eyeliner, Alderton can switch traits at ease between both extremely camp or aggressive and intimidating.

Alderton prides himself on his spontaneity and unpredictability – “my mum said to me, she doesn’t exist, but she said – if you’re going to do stand-up comedy, do it in a way where people don’t know what is going to come next”.  Jumping between random musical outbursts and nonsensical ramblings, he keeps the audience alert by never settling on one skit for too long. This allows him creative freedom and creates an atmosphere of suspense for the audience, never letting them imagine what could possibly come next.

Alderton’s wicked alter-ego is introduced at the start of the performance and manifests itself multiple times throughout. He turns his back to the audience to provide the rasping and demonic voice of his other self, who he debates back and forth with and who goads Alderton into causing mischief.  The alter-ego also cleverly provides Alderton with opportunities to provide context for his jokes and transitions into his next skit. In an interview with the Lancashire Telegraph, Alderton revealed that the creation behind his alter-ego was the result of his depression. “I ended up getting depressed and these voices started bugging me so I thought ‘right, I’ll bring them on stage as some sort of therapy’ and they’ve been my complete re-birth,” he said.

However, it seems even Aldteron’s material was not exempt from the inescapable and reoccurring theme of politics. As the general election was on the horizon and the fate of Brexit uncertain, it can be almost impossible to resist making commentary on the controversial subject. “I don’t see the point in Brexit, I don’t see the point. All the ex-pats will have to come home, and all they’re gonna do is F**KING MOAN!” Alderton sang to the cheery, upbeat backing track.

For the grand finale of his masterpiece, Alderton had prepared another musical number but was let down by his makeshift sound system (an iPad). Despite the technical difficulties, his unshakeable confidence never wavered – he was so convincing in his act that it left the audience unsure of whether it was planned or not yet still felt amused by his antics.

As the show ended and Alderton departed from the stage, the audience erupted into cheers and applause, clearly enthralled by the eccentric (and dizzying) performance.

Alderton’s unusual brand of comedy may be an acquired taste, and while it may leave you thinking “what did I just watch?” – his style is genuine, fresh and undoubtedly entertaining.