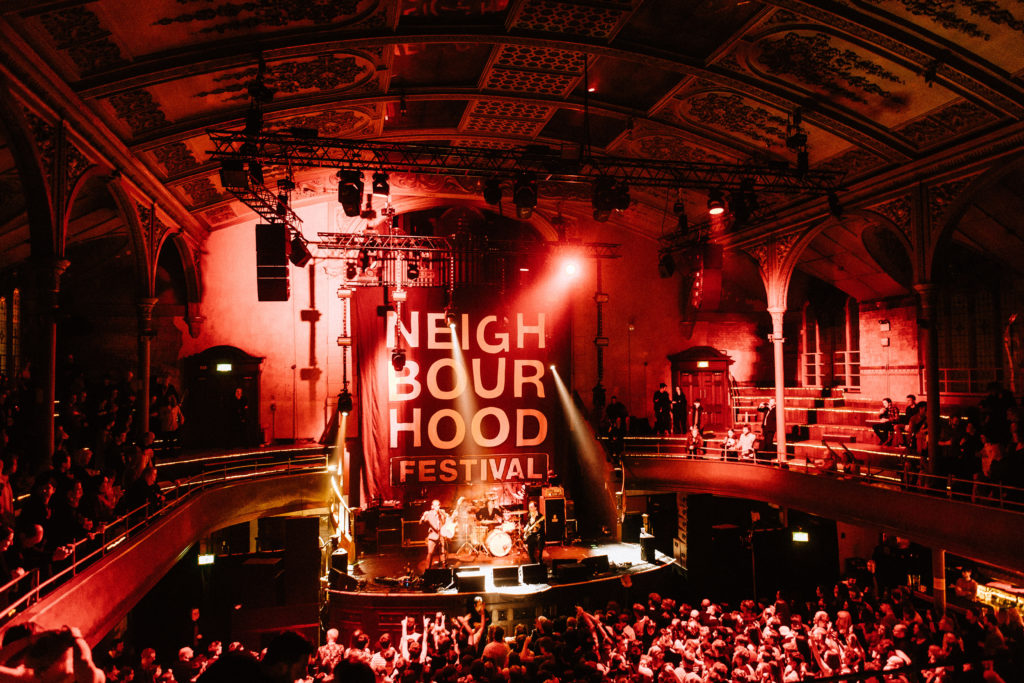 After a tremendous 2018 featuring headliners Everything Everything and Sundara Karma, expectations of Neighbourhood Festival this year were understandably high. Not only were powerhouse acts The Sherlocks and Miles Kane exceptional, but the showcase of growing talent such as Lauran Hibbard proved that Neighbourhood Festival is notorious for displaying artists who genuinely deserve a listen.

The first act to wow at Neighbourhood was indie rockers The Magic Gang. They were only supposed to have a hand in the launch party the day before the festival began. However, not a band to be left out from entertaining the masses, they joined the festival last minute, much to everyone’s delight.

From start to finish they made Manchester’s Gorilla their own and the crowd showed their appreciation by moshing to every single banger. As well as trying out a new melodic and moody track, they stuck to the classics such as ‘All That I Want Is You’ and ‘Getting Along’ to finish their set. From packing out Gorilla to supporting Blossoms on their Spring tour, they keep on consolidating their impressive future.

Lauren Hibbard is a pint-sized explosion, who is so unapologetically herself it’s refreshing to witness. Night People made the perfect intimate venue for her tongue-in-cheek lyrics, sultry and unique vocals, and boundless charisma. Although Hibbard recommended the crowd to not google ‘Hoochie’, even if it’d be “funny”, her set was much more than just witty banter.

Her upbeat catchy tracks, which capture the reality of the world we live in while poking fun at social situations in songs such as ‘Sugar daddy’ and ‘Frankie’s Girlfriend’, were more than enough proof to show she has the full package. Last track ‘Shark Week’ demonstrated her diversity, as it was a self-described “sad boy” by Hibbard, but was an effective legacy for remembering what they were about. Seamless playing and a joy to watch, they may have wanted a photo to commemorate the success of their “parent-funded” tour, but they’ll soon be racking up the numbers to prove their worth.

Next stop was the 02 Ritz where Ten Tonnes (aka Ethan Barnett) brought along the festival atmosphere, entering to the classic song ‘Sweet Caroline’. His voice packed a punch as always. Next track ‘Lay It On Me’ immediately had the Ritz floor on fire. His old but gold tune ‘Cracks Between’ saw the guitarists exchange pleased looks as the audience lapped them up. New releases off his debut album ‘Too Late’ and ‘Counting Down’ got the whole crowd moshing, before sitting on each other’s shoulders for hit track ‘Lucy’.

Ten Tonnes transferred this energy into an upbeat cover of ‘Build Me Up Buttercup’ by The Foundations. He also proved he could do slow and steady with his soulful number ‘Missing You’, which transformed the Ritz into a night sky of waving phone lights. He may be George Ezra’s little brother, but Barnett has already shown that he’s capable of making waves on his own.

Nobody can command a stage quite like front-woman of Yonaka, Theresa Jarvis, as witnessed by the crowd as she stepped out onto the 02 Ritz stage. Beyond the rock and roll attire, her boundless energy and powerful vocals leave you entranced.

From Jarvis’ personal explanations of tracks such as the emotive song, and also the title of their debut album, ‘Don’t Wait Til’ Tomorrow’ – dedicated to “anyone who is going through a sh*t time” and the hit song ‘F.W.T.B’ as an anthem for those “who don’t take sh*t”, it’s easy to feel an emotional connection to the band.

Stand out moments included Jarvis encouraging everyone to duck down and jump together during ‘Don’t Wait Til’ Tomorrow’ and guitarist George Edwards leaving the stage, just to bring the action even closer to the crowd by joining a mosh pit during last track ‘Fired Up’. It may have been a set full of surprises, but their surefire success in the music industry will be anything but unexpected.

All fans of indie were in for a treat with a headliner like Miles Kane footing the bill. His star-spangled jacket mirrored his celestial ability as he took over Academy 1 for the night, as part of his current ‘Crispy’ tour. Kane’s voice is like no other and shines on stage, right from the opening track ‘Coup De Grace’. He even got the crowd to join in on the chorus of ‘Come Closer’.

Autumn may be upon us, but Kane kick-started the festival spirit with ‘Blame It On The Summertime’. The unofficial final track of the night ‘Inhaler’ saw him jumping up in the air with his guitar whilst members of the audience crowd-surfed, and last track ‘Don’t Forget Who You Are’ was extended by Kane singing the chorus acapella with the crowd as a final memory of the night. He may have already achieved more than most could dream of in his past musical career with Alex Turner in The Last Shadow Puppets, but he is set to consolidate on this success in his solo career.

Overall, it was a day to remember and the superb community spirit and diverse talent celebrated is something which only a festival can create. With no muddy wellies or soggy tents in sight, this gives even more reason to add it to next year’s diary. If you decide to plan one festival trip, make it Neighbourhood. You will not be disappointed.