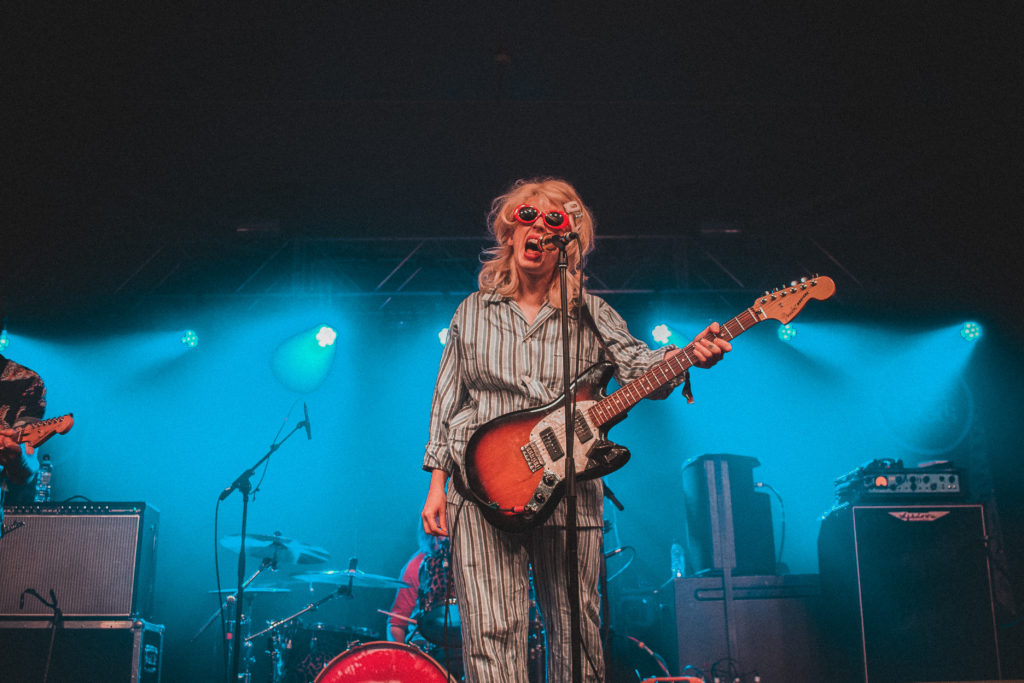 When a festival has enabled acclaimed acts such as Ed Sheeran, Catfish and The Bottlemen and George Ezra to sink their teeth into the music industry, it’s guaranteed to become synonymous with showcasing only the best fresh talent to emerge within its 12 years of activity. As this year’s May bank-holiday drew to a close, it’s clear that unlike the typical British cloudy weather, it definitely delivered.

Infectious rockers Drenge were the first to kick off the show on the Leeds Festival Presents Stage, based at the 02 Academy. Five years after their debut at the festival, it acted as the perfect homecoming for the trio. As dramatic as ever, with a black and white feature film featuring references to ‘Lenin Club’ and ‘Defend the security of the Soviet State’, it was obvious Drenge were staging a musical revolution of their own. Despite the band joking that they had tried to get ‘The Lion King’ instead but it was too expensive, the movie was the perfect choice for the moody and melodramatic tunes played. With power tracks such as newbie ‘Strange Creatures’ and older tracks such ‘We Can Do What We Want’ and ‘Running Wild’, the band do still have it. Mosh pits and crashing riffs galore, it was a set to be remembered. As vocalist and guitarist Eoin Loveless paid his dues at the end by announcing “Thank you so much see you next time”, the pleasure was ours and we can look forward to the next performance by them.

Emerging London-based band Sea Girls, may at first appear to be attempting to become ‘The Hunna 2.0’ with a premature dose of cockiness, however as the set went on it didn’t seem too unbelievable for them to be anything but loudly confident. They made the Farah Stage based at Leeds University Union Refectory their own. Old favourites such as ‘Call Me out’ and ‘What For’ were received particularly well as the band collectively added more and more energy into the set. After hearing new song ‘Open Up Your Head’ fans will be comforted to know it doesn’t seem like the band are veering away from their perfected indie tunes any time soon. They are set for success as high as guitarist Rory Young’s astronomical kicks throughout the show but don’t take our word for it. Hear it for yourself as they make their way to a venue near you, as they head out on their October 2019 headline tour.

With the mile-long queue outside the 02 Academy, it could only be worthy of one up and coming artist. Sam Fender is a name which has been popping up more frequently than cookie ads and is decidedly tastier if the comments from the female population present were anything to go by. However, Sam Fender continually proves to be what the churned out Talent Show Machine perpetually fails to produce, as his mix of charm and raw talent surely has Cowell kicking himself he didn’t snap this lad up from The Toon. From his first release ‘Play God’ to his latest offering ‘Hypersonic Missiles’ off his upcoming album due out this August, there were plenty of chances to show off his vocal prowess. Taking everything in his stride, he even took on the Mancunian beast track by Oasis, ‘(What’s the Story) Morning Glory?’ with ease. We’ll be seeing a lot more of him, as he goes on tour at the end of this year. It’s already selling out at break-neck speed so act fast.

Before long it was Fatherson’s turn to take their opportunity on the Dance to the Radio Stage at Church and show that there they were worth their salt within the music realm. Stained glass windows and a balcony with a tree in the centre, made it a beautiful backdrop for them to make their case. Often compared to fellow Scottish rockers Biffy Clyro, it was discovered that they may not be as ‘biblical’ as the former or as their surroundings, however with a bit of time to hone their talent the sky’s the limit. Their first track saw them thrashing guitar and beating on the drums, it was the penultimate song from their latest album ‘Sum of All Your Parts’. A particularly enthusiastic member of the crowd could be seen punching the air when the chorus kicked in, and this enthusiasm continued throughout the set. Followed by ‘The Rain’ another new hit, saw the crowd headbanging to the constant riffs as vocals took a backseat for the majority of this track. If rock is the devil’s music then it’s found a home in Leeds, if the characteristically gritty, crashing riffs throughout the set were anything to go by. The sound from the venue may not have been top-notch at times, but if the swaying and smiling from the audience was anything to go by, the audience left quite content.

Back at The Refectory on the Farah Stage, Black Honey was set to drive the evening into full gear. Lead singer of Black Honey, Izzy B. Phillips may have been dressed in pyjamas and in turn deceptively ready for bed. However, she had a good reason to show us that the festival was still just beginning. From the instant question from Phillips “How the f*** are you doing Leeds?”, while wearing red sunglasses and co-ordinated lipstick, she exuded old-Hollywood glamour fuelled with attitude. On her lead, the Brighton quartet powered through with old hits such as ‘Corrine’, ‘Dig’ and anthemic track ‘All My Pride’. The NME ‘Girls To The Front’ affiliates took the time within their set to kindly ask the men to step back so the girls could take their place, as they announced that their gig was a ‘safe-space’ which seems to have a become a prevalent bone of contention within the music world. It was a sweet gesture and was followed by Phillips asking ‘Mr Security Man’ if he could help her to the barrier, as a little thing like heels wasn’t going to dampen her ability for audience interaction. High-energy and atmospheric, their set was the definition of a girl power performance.

Before the time had come to say goodbye to a particularly successful day of music, there was still one final band to see. Headlining the DORK stage at The Wardrobe, Swim Deep are a band who have been around the block for quite some time on the indie circuit. After going away for a while it was a pleasure to witness their return. A fusion of catchy lyrics and psychedelic-pop tunes made it easily seem like the Birmingham natives had never been absent as they rattled off classics such as ‘Honey’ and ‘The Sea’. Hearing lead singer Austin Williams explain the meaning behind ‘Sail Away’ which was inspired by the passing of his grandma due to Dementia, was touching and made their set even more special and personal as we shared this moment with him. ‘King City’ was the quintessential lasting song of the day, oozing summer vibes and a genuine feel-good tune. It’s unlikely that Swim Deep will go into exile for as long as last time, as Williams kindly let us know within the set that “they’ve been writing a new record and it’s a solid 6/10”. Given previous albums, the low rating seems highly unlikely as it will surely surpass those expectations. Only time will tell and we’ll only be too happy to confirm them once it’s released.

Overall Live At Leeds was the perfect showcase for all the latest and greatest talent the music world has to offer. The versatile event was easily enjoyed by everyone, as the variety of artists from all genres couldn’t be knocked. The only minor criticism which could be drawn is that there was too much choice, which can never be deemed a bad thing. To tell anyone and everyone to merely make sure to attend would be an understatement, it would be better described as an essential outing, better to be heard than simply read. Muddy fields and soggy tents aren’t for everyone and if discovering talent without those detrimental aspects sounds like heaven to you, give this metropolitan fest a try. If you weren’t lucky enough to attend this year, don’t make the same mistake twice. Grab your tickets to not only get them at a cheaper price but to also guarantee your place for 2020. If previous years are anything to go by, the next one is set to raise the bar even higher. Be there or be square.