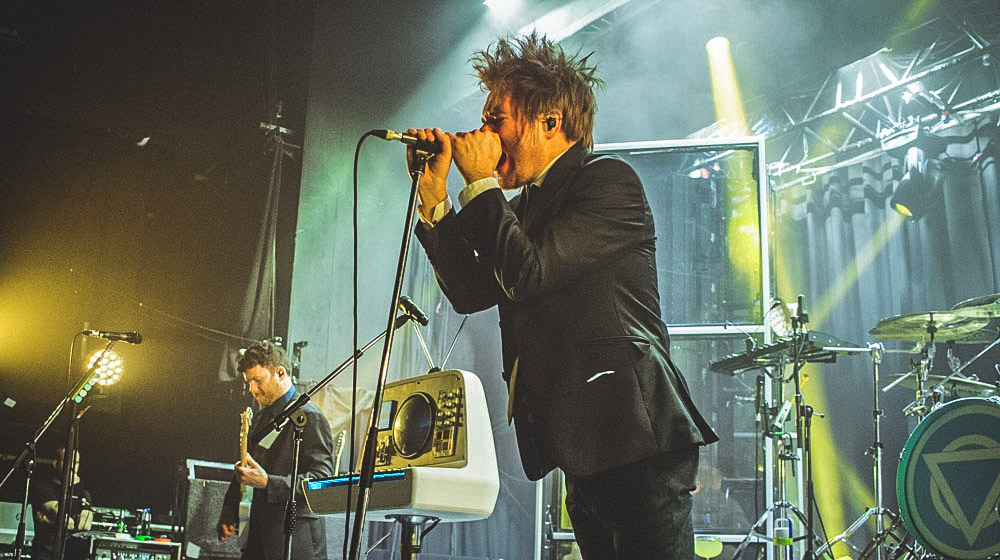 Manchester’s Academy 1 was abuzz for the return of genre-defying rave/rock-core quartet Enter Shikari.

First up however, were openers Black Peaks, who brought an updated and somewhat rough and ready approach to prog rock to a presumably entirely new audience. There was a nervous energy present at the start of their set that would later explode into a far more fluid performance. Their punishing take on the prog genre sonically resonated through the walls of the notably large venue, giving a taste of what the future of the band will look like should they continue to secure such great opportunities.

Next up were Palaye Royale, a band that have clearly attained cult status due to the considerable number of their t-shirts already floating about the venue, and a stage set up to rival that of the headline act. Palaye Royale are something of a cultural anomaly, and certainly a defiance of current trends in rock music – but not so much the trends witnessed roughly a decade ago (think Papa Roach circa 2006 but with Johnny Marr on guitar). Credit where credit’s due, the band rose to the challenge of being very much the black sheep of the bill and delivered a set so overflowing with energy and Dunkirk spirit that one could be forgiven for thinking that this was their show. With this said, mixed bills are great if a level of consistency is maintained, the bill occupancy of Palaye Royale however, undermined any level of consistency one could have hoped for tonight.

Finally, Enter Shikari took to the stage – but did they ‘Take to the Skies?’. The emphasis on the new in place of the old would indicate not so much, but the refinement of their sound no way suggested a deviation from the energy and theatrics that had become so characteristic of the band’s schtick. ‘Greetings, carbon-based lifeforms’ bellows frontman Rou Reynolds, sporting a haircut that would have probably been more fitting in their formative years as scene kid darlings rather than their current status as rock megastars. Tracksuits have been subverted for black ties, but Enter Shikari haven’t quite gone full 1975 yet, delivering their older and heavier numbers with a commendably selfless level of enthusiasm – even if these songs took something of a back seat.Visually no holds were barred either, with a theatrical assault on the senses in the form of lasers and strobes, bombarding show attendees from all corners. However, the momentum would occasionally retreat to make way for a handful of slow and pensive numbers. Solo rendition of their protest anthem ‘Take My Country Back’ gave a strong nod to the likes of Billy Bragg and asserted that Enter Shikari’s political motifs are showing no signs of being watered down – even if their sound is.