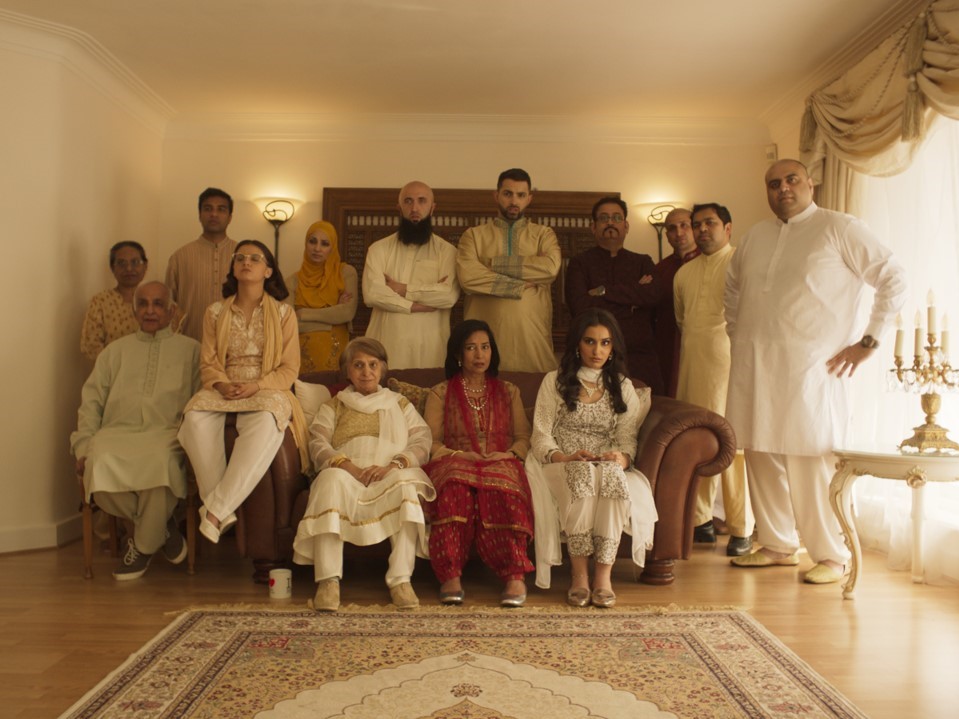 Omar and Pete are brothers. Their mother and Pete’s father die when they are young, leaving their grandmother to raise them both. After she dies, she leaves instructions to Omar, now a young man, on how to find his absent father. Pete’s aunt and uncle see Omar as their family’s shame, as he is mixed race, and are eager for him to disappear and for Pete to live with them. A lesser film would have framed this as stock, cardboard cut-out abuse, but Eaten by Lions has them voice their deepest wish in the oh-so-careful and cringe-worthy euphemism of middle England, as if Omar’s presence is a nuisance that can be overlooked.

When Pete asks if Omar is going to India, he replies “No, Blackpool.” The pair then catch a Transpennine train from Bradford to the resort, to scatter their grandmother’s ashes and to find Omar’s family. I don’t wish to reveal anything else plot-wise from here on, but don’t be fooled. This is not a dry, drab film. It is bursting with colour and energy, and director Jason Wingard wears his influences on his sleeve. The journey to Blackpool is told using Edgar Wright’s intense, frenetic and brief style of montage. The world is draped in warm earth tones, retro clothing and shot with the geometrical composition of Wes Anderson. It can, and should, be noted that this kooky, artificial style can become a lot to bear, but here it dials back as the film progresses. The presence of vinyl, scrapbooks (used to punctuate chapters), fairy lights and indie music is not so arch as in many films that employ them and, speaking as a defiant northerner, it’s nice to see Blackpool get the Sundance treatment. The only time Wingard drops a bollock is in one use of shaky cam towards the end of the film, but this is a minor concern.

The casting is spot on. Individual performances are great – Tom Binns’ beachfront psychic and Natalie Davis as doe-eyed mute minx Parveet being two standout examples – but this is a tale that needs an ensemble and the supporting cast are very good indeed. As for the central chemistry between Omar and Pete, to watch Antonio Akeel and Jack Carroll is to watch two fine young actors doing a great job, Akeel through his melancholic deadpan and Carrol through his Laurelesque facial expressions, yet it is a testament to the strength of the cast to say that both are almost unhorsed by Asim Chaudrey in the film’s second half. Almost.

Although the film is a farce and wears a saccharine coat, it has neither the kiss-me-quick nausea of the Run For Your Wife variety, nor the genre’s characteristically high stock of characters entirely lacking in nuance. The appearance of the feared Manic Pixie Dream Girl in Sarah Hoare’s Amy threatens to scupper an otherwise fine cast of characters, but Hoare is skilled enough as an actor to carry the day. For all the fluff, this is a film that never loses sight of the essential tragedy that is the story of every separated family. It does not avoid showing how toxic such a fissure can be when the element of race is added. That being said, I do not think that comparisons to East is East are warranted. I think that cheapens both films.

Eaten by Lions is a wonderful, warm, charming and amusing film, made by talented people who have a lot to give. Go and see it, go and enjoy it.