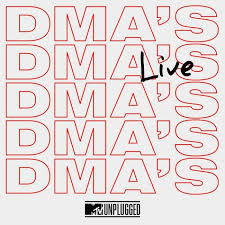 This album is a special live compilation from DMA‘s previous hit albums ‘For Now‘ and ‘Hills End’, but with a stripped back and raw feel. Greats such as Nirvana and Oasis have had past success with their MTV Unplugged releases, and it’s only fitting that this band should be graced with the same opportunity. Their album was recorded at an intimate venue, Melbourne‘s own Memo Music Hall last October.

It’s certainly a new direction for the band. Trialling an acoustic set over Britpop could’ve been a risk, but the remastered tracks have a more soulful feel, and it allows the lyrics to shine. Avid DMA’s fans may notice that ‘Step Up The Morphine’ is one of the most notably different tracks, as well as the band’s cover of Madonna’s iconic song ‘Beautiful Stranger’. Another brave move tackling such a well-loved track with ease and doing it justice. This trio is made up of vocalist Tommy O‘Dell, Matt Mason on lead guitar and backing vocals, and guitarist Johnny Took. They formed in 2012, in Sydney and band popularity for their debut single ‘Delete’ and their self-titled EP released in 2014. ‘Indie Is Not  A Genre’ hailed them as ‘Australia’s most British band’ for their dedication to Britpop and gained them national acclaim for their work. The big question, is how well do these tracks work acoustically? The answer is extremely well.

With the intro focusing on the audience cheering before the band have even begun to perform, it not only reminds you of the live aspect of this album but how it’s instantly going to be one of the most popular releases this year judging by the following of their fans. O’Dell’s voice is the focus on this album, especially when accompanied by the violin instrumentals which are peppered throughout. In ‘Feels Like 37’ as O’Dell tries to get through to the addressee he is left singing “And all I want is you to stay, you to stay”, emotion clinging to his words.

Stripped-down ‘Emily Whyte’ sounds highly reminiscent of a Gallagher track. The acoustic strumming during the intro feels almost like a knock-off ’Wonderwall’. The heart and soul carried by O’Dell’s voice help remind us it is not necessarily an improvement but a  reinvention of a DMA’S classic.

In this acoustic version ‘In The Air’ reaches new heights, as violins provide a heavenly serenade painting a romantic vision of being next to the Eiffel Tower at night, which matches the lyrics perfectly. The whole track is cinematic in its production and the applause at the end reminds us of its live capture.

The live and acoustic elements of ‘Beautiful Stranger’ add a new-found edge to this track. However, it also retains the psychedelic nature of the original recording by Madonna retaining the aspects which made it a hit originally.

Another track worth mentioning is ‘The End’. It is the most heartfelt number and how he emphasises certain words throughout the track sends shivers down your spine, especially the lyrics “I can feel the end/ Is there something more?”. At the end we are told by O’Dell that it is the first time we have been treated to this track live, making it even more special.

The final track on the album is ‘Do I Need You Now’. It features the longest instrumental and is full of the violin. It is the last chance for the band to prove how their talent extends beyond their typical Britpop tracks. In the end, a small chunk is left for the appreciation of the crowd.

With longer intros and outros, it’s an album which doesn’t have to be constricted by radio play. For example  ‘Do I Need You Now’ is 4 mins longer, and allows the band to mix it up, and add violin instrumentals where they otherwise wouldn’t be able to. It makes the album raw and full of emotion pushing their boundaries and produces something which is guaranteed to be a fan favourite for years to come. This Acoustic recorded performance arguably helps to convey feelings that electric instruments could only wish to create. Overall this is a collection of songs which make you want to smile and cry simultaneously. Albums which manage to do this are rare gems, and will easily stand the test of time. DMA’s ‘MTV Unplugged Live’ is available to stream and purchase on all major services.

Be sure to keep up with the DMA’s: