You are here: Home / Culture / Manchester / News / A Brief History of Black People In Britain 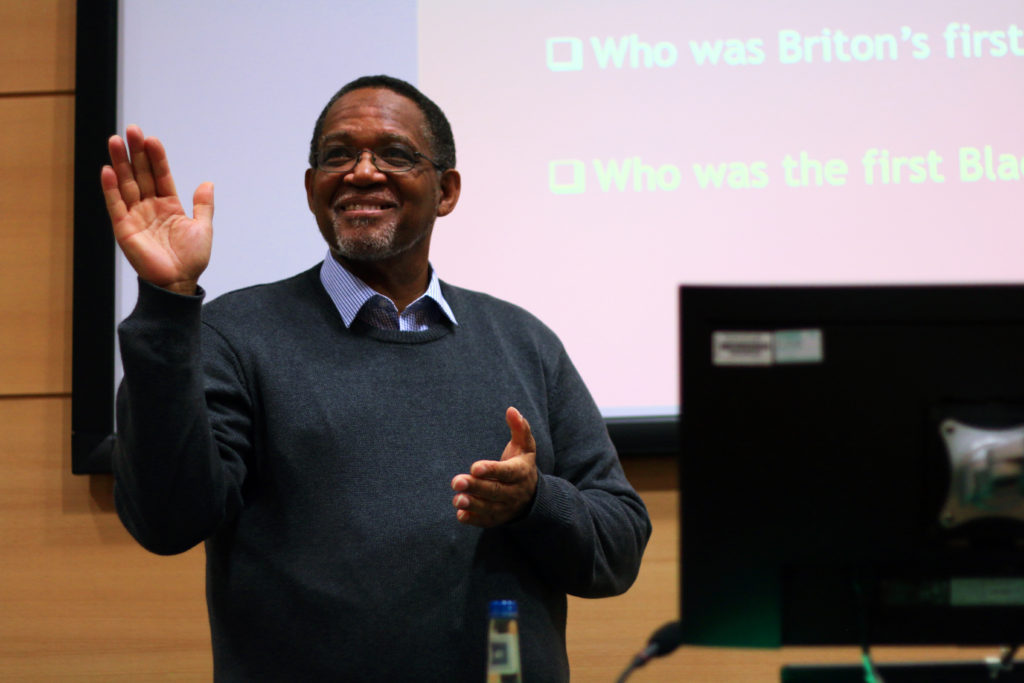 As Black History Month drew to a close, Manchester Metropolitan University hosted historian, genealogist and author Linford Sweeney, who gave a talk on the oft-forgotten history of many of Britain’s remarkable black citizens.

He began the lecture by quizzing the audience on a few milestones in British black history, such as: “Who was the first recorded black Briton?”, “Who was Mary Seacole?” and “What was the Pan-African Congress?”

Not many of the attendees knew the answers, which were to be revealed in the lecture.

Sweeney was keen to emphasize that not all of British black history was about slavery, but that black people have been present in Britain as early as the years of Roman Occupation. The earliest recording of a black Briton is Cornelius, who died in 1595. The Atlantic Slave Trade brought many Africans to Britain as slaves, but many also came over as interpreters or sailors. By the 1760s, 20,000 black people lived in Britain.

“People don’t realise this but not all black people started out as slaves. They were artists, they moved between ships, they were on the ships that went to America”, Sweeney explained.

He sought to point out high achievers to prove this point, running through a list of black Britons who made their mark on history despite not receiving due recognition. Notable names included Robert Wedderburn, an activist who helped secure freedom of the press in Britain in the 19th century, Olaudah Equiano, a former slave who campaigned for the end of the Atlantic slave trade and George Bridgetower, a famous violinist who was mentored by King George IV.

Achievements continued well into the modern era. Sweeney shed light on other figures such as Sir Trevor McDonald, the first black British newsreader, Claudia Jones, the founder of Notting Hill Carnival and Diane Abbott, the first black woman to become a Member of Parliament.

After his presentation, Sweeney took questions from the audience. When asked about the lack of knowledge surrounding Britain’s black history, he responded, “when I went to school, I didn’t learn about any black people. History belongs to the victor, and I suppose people like to see people who like them.”

However, he suggested that things were changing for the better: “I think that’s partly because of the internet, because now you can do your own research. Before you had to rely on books written by people who didn’t write about people like this.”

Many in attendance wanted to know what they could to do to help push for inclusive education, and Sweeney pointed to initiatives for changes in University, including incorporating black history into history degrees. He recalled a time when he found out that there were only five black people teaching history in the whole of the UK, noting, “if you’ve not got people teaching the history, how’s that going to work?”

When asked about whether he’d noticed an increase in enthusiasm for black history since he started teaching it in 2005, Sweeney told aAh! Magazine, “not really…it depends on where. It’s getting more the case outside of Manchester, more people are interested in it. There’s definitely an enthusiasm behind younger people who want to know their history, but some of the older people say they don’t need to know it.”

Sweeney does acknowledge, however, that the general public are becoming more aware of aspects of British history than previously before. He pointed to the story of Oswald Dixon, the 100-year-old war veteran from Jamaica who recently passed away, and whose funeral was attended by various members of the Manchester community.

“He fought in the RAF, he deserved a good send-off. People learnt a lot from that story”, Sweeney said.

Dee, a Psychology MA student who attended the lecture, told aAh! Magazine, “there were so many parts of British black history that I didn’t know about. All of the people that had fought in the war, the first black professor…so many! I can’t even name it all to be honest!”

To learn more about the work Linford Sweeney does, visit his website.