You are here: Home / News / Opinion / The Reality of Women in Spain: Expats share their opinion 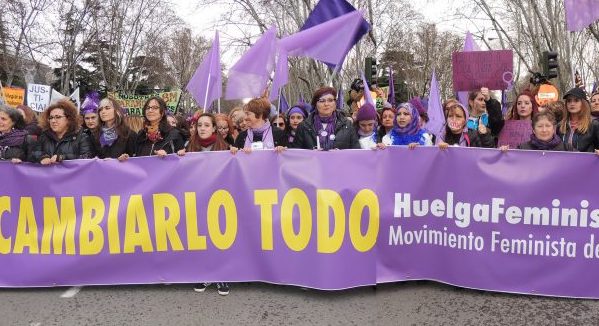 Spain celebrated International Women’s Day with what has been declared as the first nationwide feminist strike. Coordinated by an umbrella group, the 8 March Commission, around five million people marched in 120 cities to protest sexual harassment, domestic violence, LGBT discrimination and the gender pay gap.

Under the slogan “If we stop, the world stops” women skipped their jobs for the day to take over the streets. They marched with banners with messages such as: “They took so much away from us that they ended up taking away our fear”; “No woman has an orgasm polishing the kitchen floor”; and “Women’s rights = human rights”.

Celebrities such as Penélope Cruz and prominent political figures, like Manuela Carmena, mayor of Madrid and Ada Colau, mayor of Barcelona, supported the cause by joining the manifestation and posting on social media.

The overwhelming presence at the marches has been partly influenced by the Me Too movement, prompted by actors in Hollywood denouncing the sexual harassment and predatory behaviour of the male titans of in the industry. However, Spain’s reality is much grimmer, summed to sexual harassment, alarming figures from 2017 stated that 49 were killed by their partners and ex-partners (44 were killed in 2016). While the official figure of 2018 hasn’t been released, government statistics show that violent abuse is on the rise.

To talk more about the reality of Spanish women, twenty Spanish expats living in Manchester were asked about their views on feminism, whether they believe in gender inequality and whether they thought manifestations such as the one on the 8th of March were necessary.

“Of course there’s gender inequality in Spain. Not only because of the regrettable labour practices, typical of Spain (for example, asking in an interview whether you think about forming a family, at what time, etc) or because of the gender pay gap, but also because of the objectification of women or what is normally thought about them when a sexual aggression occurs. Sadly, nowadays in the 21st century, there are still a thousand things we need to change in the minds of the people.”

“Women and men have different rights and have it easier in different aspects. In some situations, the men are benefited; in others, the women are benefited. For me, it worked positively being hired for a customer focused role because of being a woman and because “I would sell more”. I got the job because of my image, and for being a young woman. They didn’t care about my curriculum and the boss told so at some point.”

“In my point of view, the education at homes is very different for boys and girls. Expectations about women are also different and usual questions like ‘Aren’t you going to have kids? Have you married?’ are usual. I’ve been a victim of gender inequality at the hands of family members and colleagues. A couple of years ago, I did an artistic collaboration with a man who only thought about discrediting me for the mere fact of being a woman. Manifestations like the one during the 8th of March lead to some political or social change.”

“There are more men in roles of high responsibility than women. More men are hired than women, especially at ages in which women are supposed to aspire to become mothers. The ‘micromachismos’ are present daily: ex-boyfriends that control where you go to; relatives that are shocked at seen me and my partners sharing the domestic duties; you get called “madonna” because your partner listens to you, etc. I think such manifestations are necessary because some people believe women should be submissive and silenced. So many women are victims of violence and the law doesn’t do enough to protect them.”

“The word of a woman is less worthy than a man’s. At the age of 18, I worked as a welder. I started as a junior despite fulfilling duties of a senior. A year later, my position was the same while other guys were promoted to seniors. The manifestations make us feels that we aren’t alone in this fight.”

“There’s inequality because women are paid less. The numbers of temporary contracts are mostly available for women and femicide numbers raised last year. The manifestations shouldn’t stop until there is gender equality.”

“Women without economic resources suffer double discrimination. Women are not paid the same as men for doing the same duties. Pensioner women get less money in Spain than men for the fact of being women. At work, I’ve received derogatory comments and treatment because of being a woman. There have to be more manifestations to highlight the issue and allow women who are tired of this to speak. And so, measures will be taken.”

“Gender inequality exists in all countries of the world, but I must say that there’s less inequality in Spain than in other countries. This inequality could be seen in many aspects, such as the gender pay gap. I think this should be fought against every day and not by doing manifestations, which sometimes achieve the opposite of what they intend.”