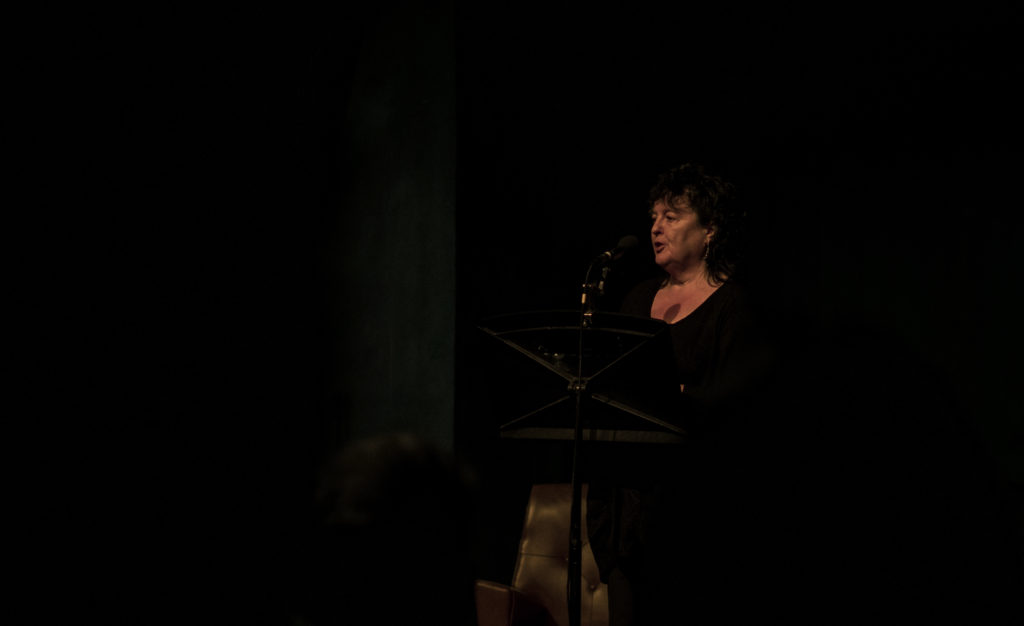 Zaffar Kunial’s debut collection Us was published by Faber & Faber in 2018. Jackie Kay describes his work as “precise, startling in their imagery, full of grace”. Zaffar was born in Birmingham and lives in Hebden Bridge. Since his first public reading, of ‘Hill Speak’ at the 2011 National Poetry Competition awards, he has spoken at various literature festivals and in programmes for BBC radio, and won the Geoffrey Dearmer Prize for his poem ‘The Word’. 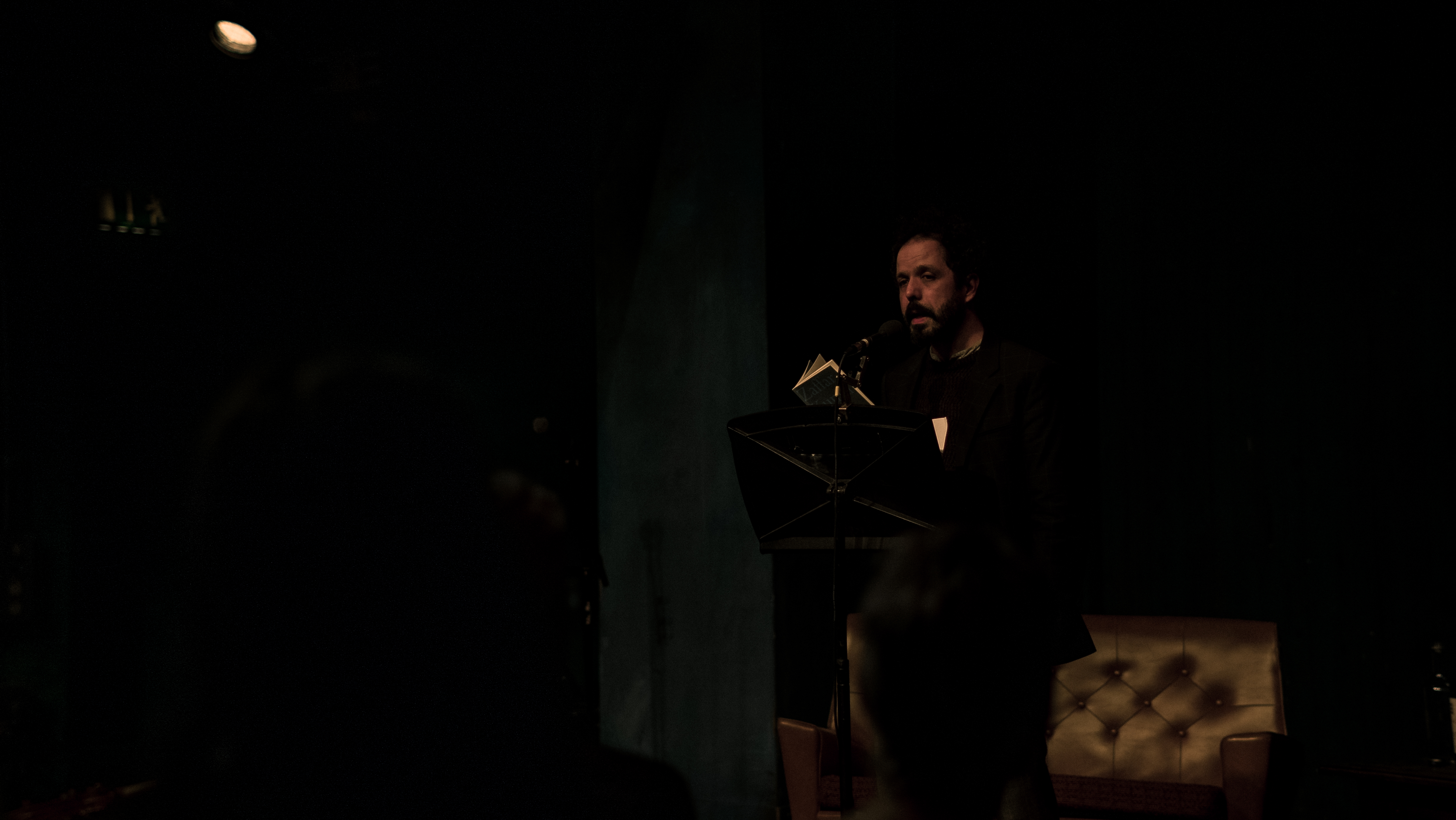 Poet and guest reader Ian Walker spoke to aAh! before the event to tell us what to expect of the evening, saying: “We can never really know what to expect, it’s such a great evening at Carol Ann Duffy and Friends because it’s a mixed bag.

“The voices that end up reading – from the poets who are working with the writing school, and the alumni, and then the poet in residence – are so disparate but also gel beautifully. Every time I’ve been really excited by everything this been read so I’m really looking forward to reading myself.”

The event was kicked off by Carol Ann Duffy who read poems ‘Gorilla’ and ‘The Ex-Ministers’ from her latest November collection, Sincerity (Picador). These political poems placed the audience firmly in the ‘now’, preparing for the newness of the emerging poets that were to follow.

Next was a performance from South Manchester rap artist, RJ, who has been carving his way into the Manchester grime scene to showcase his unique brand of deep and dynamic lyrics.

RJ used music and lyrics to explore his own thoughts and emotion, painting vivid pictures of the life he once lead, and pieces ‘Fear’ and ‘Be Yourself’ were an impressive and stirring depiction of strength and self-healing. 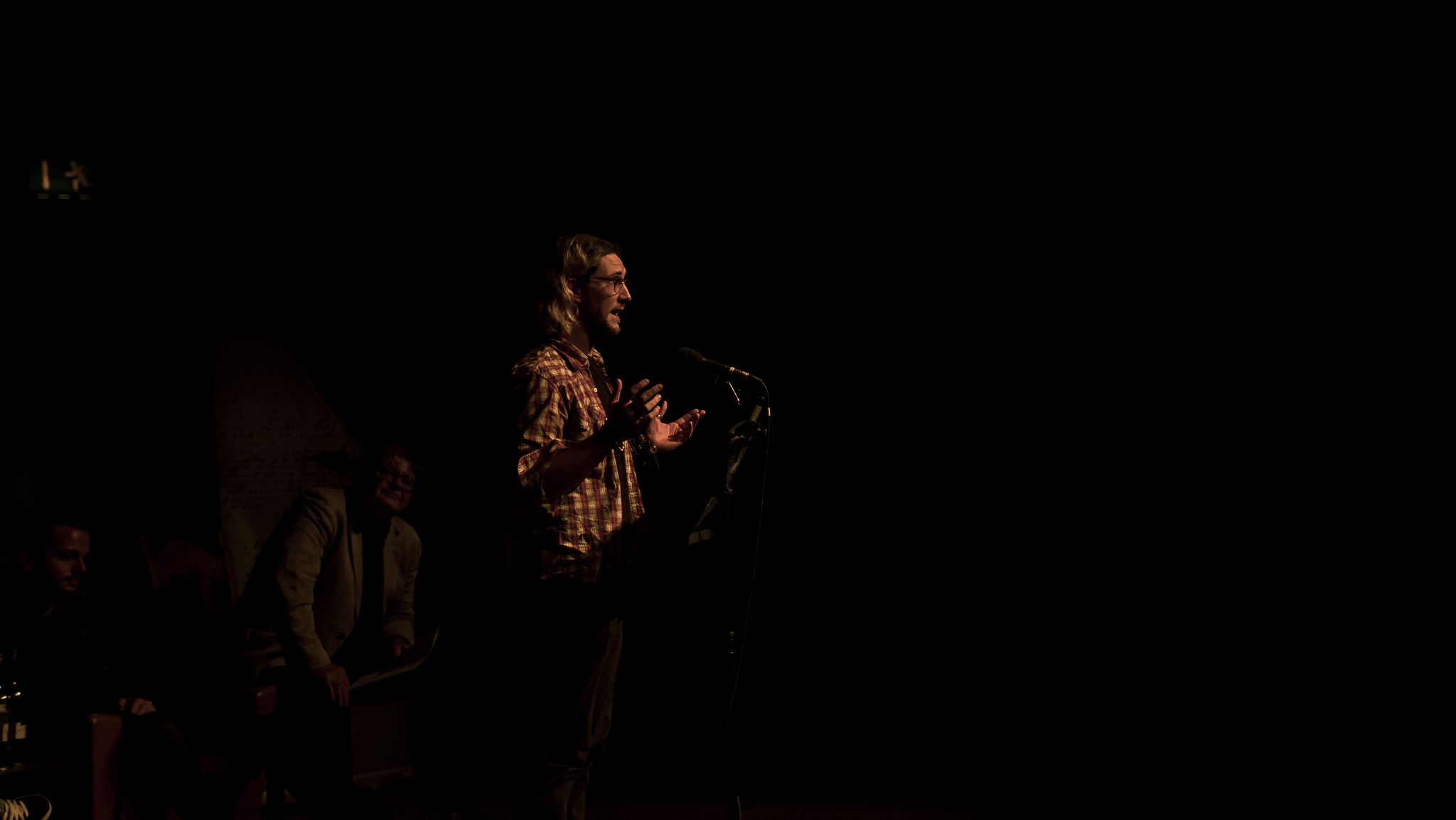 Next to speak was Ian Walker, a recent MFA graduate at the Writing School.

Walker’s poems have appeared in magazines such as In the Red, Magma and the North, as well as in anthologies such as Independent Variable and The C Word.

In 2015, Walker won the Borough prize in the Live Canon International Poetry competition, and was also this years Apprentice Poet in Residence at the Ilkley Literature festival.

Ian began to read from his debut, which combines to notions of queerness, intimacy, philosophy and identity. In one poem, titled ‘Unbidden’ John Donne’s flea lands on the body of a lover, and in another, ‘She goes down to the garden to pray’, a sanctuary is found within the ‘spineless deities’ down the bottom of a garden, where ‘worms move the earth’. 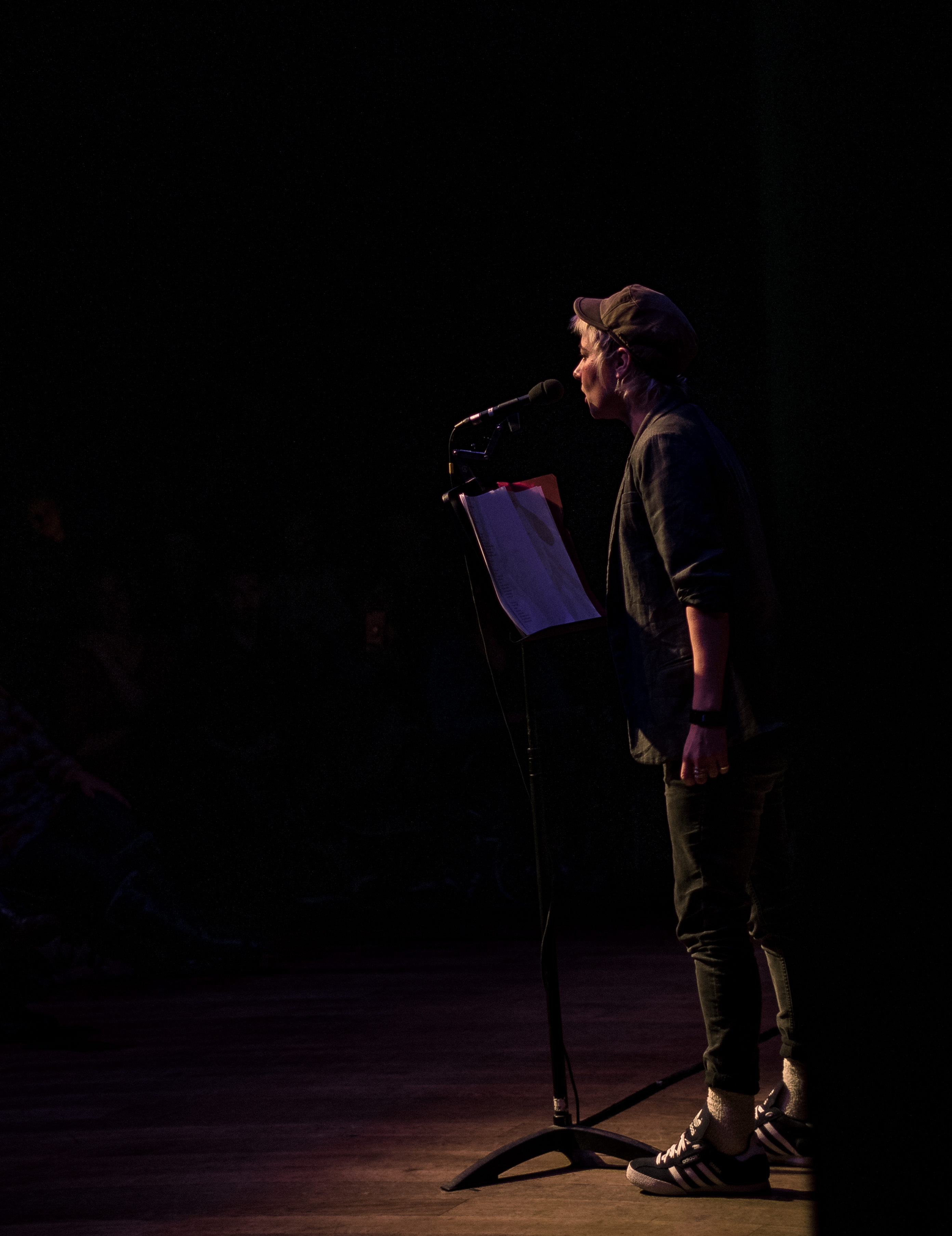 The final reader of the first half was Emma McGordon, an award-winning spoken word artist and writer. McGordon is a previous Julia Darling Fellowship winner and was long listed by Saboteur Awards as a Best UK performer. She has performed nationally and internationally and has been published by Penned in the Margins and Tall Lighthouse.

McGordon’s poems circled the close encounters with family and strangers, about women and what it means to be a part of a demonised identity. ‘Sexing the Snake’ translated the traditional story of man’s fall from paradise into through the words of a modern woman.

aAh! spoke to McGordon after the first half to ask her about some of the influences of her forth-coming collection The Eve Gene, a scientific nick-name for Mitochondrial DNA, the DNA passed through women.

“I started writing that, I wanted it to be about Mitochondrial DNA, and also the women in my family, but my dad just kept turning up. I write about my dad a lot, and I never expected that to happen.

“I started getting interested in ideas of inherited trauma as well, the idea that our genes are affected by our parent’s traumatised genes, we actually inherited genes that are pre-traumatised!

“Queer experience comes naturally into that. […] I won a Julia Darling Fellowship and I travelled to San Fransisco to study the comparison between queer identity in rural environment and queer identity in urban environment and obvious San Fran. is the central of queer experience, and I went during pride. So that informed my writing as well, the idea that its alright to be me.”

As the second half began, Carol Ann Duffy approached the stage to introduce Zaffar Kunial, saying, “I’ve been poet laureate for ten years and over that period I’ve come across three extraordinary poets, Alice Oswald, Don Patterson’s collection Rain and thirdly Zaffar’s collection, Us. It is the most exciting debut I have read in over a decade.

“Its not a poetry that gives itself away immediately, but it is a poetry that draws you in and makes you want to live with it for a long time. It’s almost Shakespearean in its delving into the textures and possibilities of language.”

With that, Kunial walked on to the stage to read from his shortlisted debut collection.

“The word ‘us’, I suppose, is a small word that I think holds a lot of confusion,” began Kunial as he explains the tension in identity when having a British mother and a Kashmirian father.

“With Brexit ‘us’ has a big currency at the moment, and when I was young my father’s family would say ‘us’ and I wouldn’t always no if my mum, who was white, was included in their idea of ‘us’, and I’d hear other people say ‘us’ and I knew my mum was in that but I wasn’t sure if my dad was.”

Kunial began to read his startling title poem, were the reader becomes a part of the philosophising of Kunial’s own identity: “I’d love to think I could stretch to it – us – but the waves therein are too wide for words.”

In another, Kunial places his face onto the portrait of Shakespeare, tries him on as a means to become closer to his works as if sharing a false memory: “by this lapse the light on your mouth seems cast half on mine when I borrow the line between your lips.”

Kunial’s words were spun as web-like thoughts, filling the room with notion of past, family and identity, as well as of literature and culture. Each poem was painstakingly precise, his language simple and stark.

“Poetry should be a conversation with the past,” Kunial said while introducing his final poem ‘Prayer’. “I’m not interested in this notion that we should throw away the past I think that’s quite wrong. And the magic of poetry for me is when the past comes alive in the present and there’s a communion.”

Here, Kunial ended his reading, his final poem a touching on the pulse behind words that are passed on through loved ones, and some of his mother’s final words to the sound of hospital machines

After the event, we spoke to poet Keith Hutson, who said, “Every time I attend Carol Ann Duffy and Friends I marvel at the eclectic breadth and wit of the performers. Their strength, their engagement with the audience their depth and the sense of community that the evenings bring. They are a joy.” 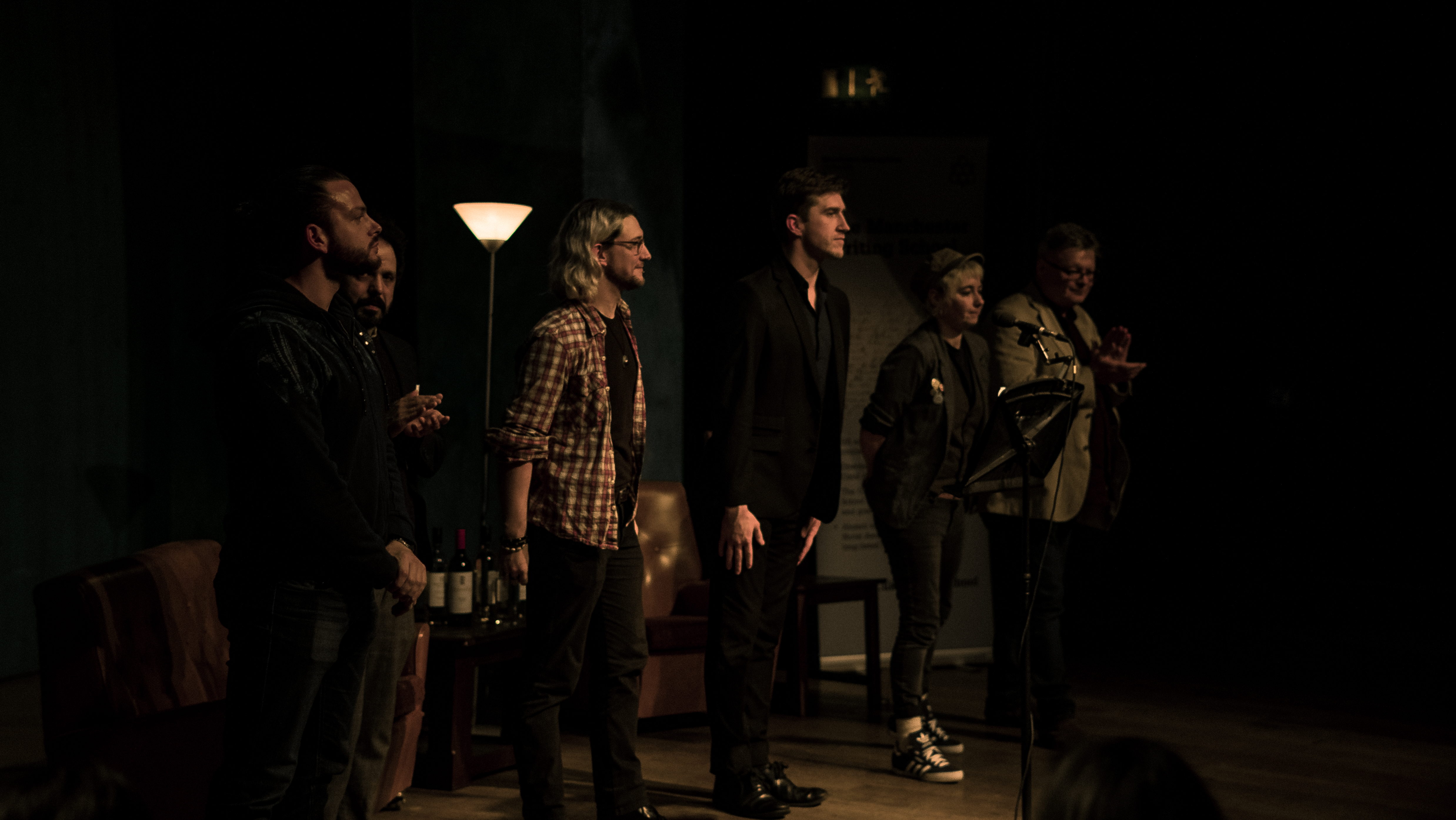 One student, who travelled from China to go to study the work of Carol Ann Duffy explained to aAh! why she comes to Carol Ann Duffy and Friends, saying, “I come here to better understand Carol Ann’s poetry. This event is a kind of artistic atmosphere to enjoy the reading and listen to the young poets.

“There is an energy, creativity and imagination there, I got to know the difference between poetry performer and poet from today’s event, and I think Carol Ann Duffy’s reading was very powerful and moving.”