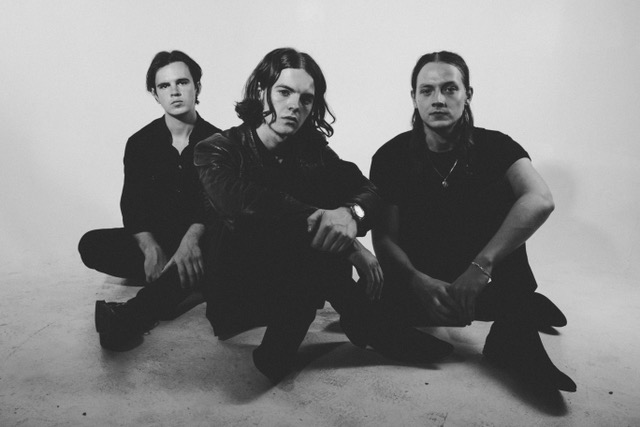 The Blinders, a three-piece alternative group from Doncaster, have exploded onto the music scene, and anyone who has witnessed them live or even heard them on Spotify can easily vouch for their talent. They are no stranger to radio, having had their offerings played on BBC Introducing, Radio X and BBC Radio 6. If this isn’t enough for their acclaim to fame, the group have also been named a “Must See Band” by BBC Introducing Sheffield.

Their most dedicated fans were lucky enough to attend the live premiere of their debut album, Columbia, at the quintessentially indie setting of FOPP in Manchester. Before they even began playing, we were reminded of the sky-rocketing success Mancunian-adopted bands can acquire by the background noise of the latest Arctic Monkeys offering. We were also introduced to the charismatic quality of frontman Thomas Haywood, who warmly shook hands with fans. We soon realised that, mixed with their heavy guitar riffs and grating lyrics, they completed the trifecta of ingredients needed to create something special in the rock world.

The set began with ‘Free The Slave’ echoing through the speakers, essentially a call to arms. Throughout the set, Haywood raised his hand for emphasis, automatically inviting us to join him. Along with his erratic jumping on stage, and his bandmates matching his style with strong strumming and crashing drums, it became obvious that this is more than music – it is an experience. Haywood captivated our attention with his punk-reminiscent spitting, encouraging us to look around at our growing community built on prejudice. We should, we felt, join them in challenging the status quo, happily brainwashed by their self-titled ‘punkadelic’ sound.

‘Gotta Get Through’ is the first track on the album, and was in turn, the first glimmer of the powerful playing of Thomas Haywood, Charlie McGough and Matt Neale. ‘L’Etat C’est Moi’ followed, in which Haywood proclaims: ‘I’ve got divine right, I say jump, you say how high?’ – a powerful commentary on society and government which cements this band as a modern day Clash, peering through the cracks in our world. ‘Hate Song’, grungy and rhythmic, continued the assault on our ears. Like clockwork, the band then dove into ‘Where No Man Comes’, which was well-received following the moody precedent they had set.

The angry ‘I Can’t Breathe Blues’ aided the seamless transition between tracks, having the audience bobbing up and down throughout. As soon as they announced the next track, ‘Brave New World’, they were met with increased excitement. Arguably the most famous track on their album, having been featured on Spotify, it was lapped up by the willing audience.

In ‘Et Tu and ‘Brutus’, the audience was met with a hellish chaotic frenzy unlike many other contemporary offerings, and they left everyone at their surrender as they banged their heads to the expertly executed riffs. The set ended with Haywood strumming the melodic refrain of ‘Orbit’ as the rest of the band left the stage. It almost seemed as if he was the Pied Piper, taking the audience gladly under his spell.

All the while, Haywood’s face continued to turn a brilliant scarlet as he clearly put all of his energy into the performance. It seemed as if this is the last chance for them to play, and they must out-do every past performance – a level of enthusiasm which is quickly becoming representative of the band’s ethos. Before the set had even concluded, it was obvious that they have joined the growing collective of artists such as YUNGBLUD and Grandson as one of this century’s most influential political bands to date, between their drive, ambition, and ingenious ability to create the unexpected.

While only the band’s particularly loud fans may have made the cut for this live show, this fuelled the raucous atmosphere built by the constant crashing songs with their power-house riffs. Their energy was mirrored almost exactly by the audience, especially by a man at the front, who seemed unable to show his immense appreciation for the band enthusiastically enough. 45 minutes could be too short for some artists to gather a high-energy buzz, but as per usual, The Blinders accomplished this with ease, offering a cheeky flavour of what their gigs are like. Their influences include the legendary likes of Iggy Pop, Nick Cave and John Cooper Clarke, but this combination enables them to stand out by morphing them together to create their own unique sound.

It is an understatement to say that they demonstrate that rock is definitely not dead – just reincarnated.

The Blinders play Manchester’s own Academy 2 on Monday 15th October. Tickets are available from See Tickets. You can also catch up with them on their own official website , Facebook, Twitter and on their Spotify.