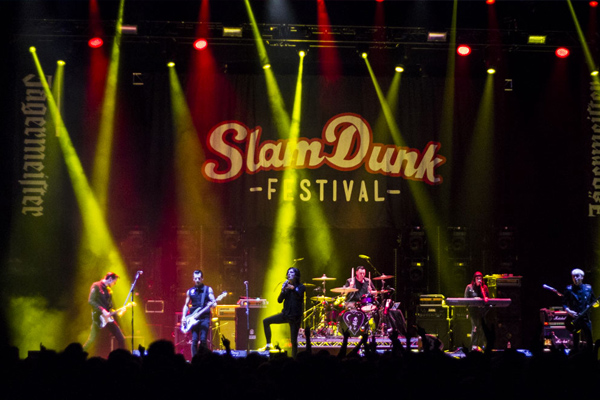 This weekend saw the return of the annual northern instalment of Slam Dunk Festival, catering to fans of all things alternative. It’s clear that the organisers of the fest find themselves feeling more ambitious each year with regards to not only the calibre and status of the acts appearing across the day, but the impressive arrangement of the event itself.

It’s a notable feat to cordon off a sizeable chunk of Leeds city centre all in the name of punk rock, fill it with food and merchandise kiosks, all while showcasing some of the most reputable and esteemed acts in pop-punk, metal and everything in between.

The first act we caught were Cardiff grime/punk mavericks Astroid Boys. These guys’ rise to notoriety over recent years has been near enough meteoric. Despite playing so early on in the day, as well as being a man down, AB defied all odds and ailments to pack out the O2 Academy Leeds and expertly deliver a set that was as entertaining as it was tight. [7/10]

Moving outside, we had the chance to bask in the sunshine and check out New Jersey up-and-comers, Can’t Swim. Despite being plagued with technical difficulties, the band demonstrated strong showmanship and spirit powering through a set of impactful, and often aggressive alt-rock. Making their Slam Dunk appearance right off the back of a high profile tour with Creeper earlier this year, Can’t Swim found themselves playing to a sizeable crowd this Saturday – one that is no doubt set to continue growing. [8/10]

For a distinct shift in pace and atmosphere, we were back indoors at the Impericon stage for another hot export from South Wales, Brutality Will Prevail. The doom-laden hardcore veterans may have been thrusted into unfamiliar territory when taking note of their heightened level of DIY authenticity compared to some of the more sanitised bands on the lineup, but they rose to the challenge with prowess and vigour. BWP tanked through a set that was as melancholic as it was heavy, dishing out old favourites such as ‘The Path’ and ‘Trapped Doors’ and ‘Moving Walls’, interjected with material off their latest release In Dark Places, which not only proved their versatility as performers, but their capacity to still write new music that stands up to the old. [8/10]

Creeper were to take to the Jaegermeister stage shortly thereafter bringing their dramatic style and punchy, emotionally charged tracks to Leeds’ First Direct Arena. Witnessing the band take command over such a big space and demonstrating great confidence in their theatrical set, we know that they are destined to headline arenas in the near future. With every song, the whole the arena would erupt with energy and excitement, with ‘Winona Forever’ being a clear highlight for a lot of the attendees. [8/10]

Meanwhile, back at the Academy, the next band on our itinerary were Christian metalcore titans, The Devil Wears Prada. When considering the band’s status and ever-present influence, it seemed somewhat inappropriate for them to be so far down the bill, though God did not send TDWP to condemn the world, but in order that the world might actually hear some good music borne out of the MySpace era of metalcore. And that’s exactly what went down. The band adeptly charged through a set with considerable emphasis on their older material and crowdpleasers such as ‘Danger: Wildman’, and ‘Mammoth’, exhibiting an undying energy even after well over a decade as a band. A highlight of the day. [9/10]

Next up were Counterparts, who despite being an already reputable name in the world of post-hardcore, seem to be recently gaining even further momentum. The band make no secret of their grassroots beginnings, with a set soaked in traditional hardcore motifs, fused with their more polished refinement of the sound, and plough through a set that proved to be one of the most well-oiled of the event. [9/10]

Out at the Signature Stage, Broadside’s crowd was visibly awash with anticipation before the band had even made an appearance. Offering music with an emphasis on the ‘pop’ in pop-punk, frontman Ollie Baxxter added an impressive dynamic to the bands’ performance with his soaring vocals. Fans could likely expect these guys to return for a UK headline tour as onlookers belted the words to popular hit ‘Coffee Talk’ without missing a beat. However, to an ear not properly inducted into Broadside’s sound, it could be forgivable if one was to fail to see much of a distinction from song to song.[6/10]

Glasgow rockers Twin Atlantic are more than well-versed with the festival scene, and no one gets a crowd going quite like them. The fans were clearly digging the latest releases from new album GLA, just as much as the oldies. After this performance we can’t wait to see what Twin Atlantic have to offer next. [8/10]

Representing the UK’s ever-growing pop-punk scene came Milestones. After releasing their debut album Red Lights with Fearless Records in late February this year, the band have gone from strength to strength and fully deserve their growing fan-base. Whilst performing on Rock Sound’s Breakout Stage this festival, you can definitely see they are this year’s ones to watch.  Full of ambition after conquering a North American tour last year with label-mates Mayday Parade, Milestones have garnered a dedicated following, and today they proved why. [9/10]

After a well earned sit down, we made our way back to the First Direct Arena for Frank Carter & The Rattlesnakes, whose growth over the past two or three years has been truly incalculable. It would have been near enough inconceivable to see Frank playing with Gallows, the band who started his career and turned him into a household name, in a venue of this size. From the perspective of someone who grew up on his more elementary works, watching this set was a surreal experience.

Following a rather drawn out preamble, which did little more than prove that the band were relishing in the experience, they took to the stage one by one, completed by Frank who swaggered on, garbed in what appeared to be a leopard print trench coat and a pair of shades, evocative of those worn by the likes of Ozzy Osbourne and Liam Gallagher. The man is a presence to behold, and he knows it. The overtly performative introduction, however, rather starkly juxtaposed with a sound that felt somewhat flat. It’s honestly tough to identify the reasons for this – perhaps The Rattlesnake’s are better suited to smaller venues, and would be better off embracing their rugged punk edge than seemingly seeking to escape from it, or perhaps it was merely a matter of them being too quiet, but something felt amiss. Irrespective of this, the band’s theatricality and sheer charisma, partnered with the quality of some of the tracks, made the set inescapably enthralling. [6/10]

Returning to the main complex of the fest, we set up shop for the remainder of the evening at the Monster Energy outdoors stage, which was to showcase Taking Back Sunday. The emo rock veterans are soon to be celebrating 20 years as a band, though they still prove to have the spritely energy and musicianship to rival  some of the younger acts across the event. They made their way through just over an hour of material from across their back catalogue, which was largely well received but not nearly as much so as fan favourites ‘Cute Without the E’ and ‘Makedamnsure’. [7/10]

Shortly after, headliners Jimmy Eat World took to the stage, who akin to their immediate predecessors, demonstrated the ability to maintain their energy and charisma following a long, influential and fruitful career as a band. They set the precedent early on, by opening with ‘Bleed American’, and powering through a set of both favourites and deep cuts. A great and deserving headlining act to close another successful instalment of Slam Dunk Festival. [8/10]