You are here: Home / Interview / Music / Lo Moon: Gravitas, gigging, and doing it on the road 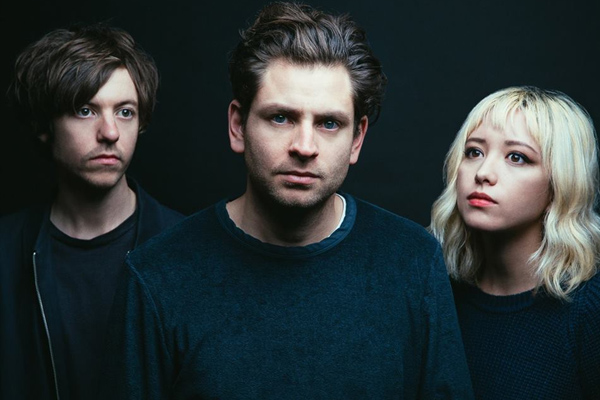 L.A. band Lo Moon are quickly developing a loyal fanbase with their unique blend of soft rock and electronica. To cook up their sound in the crockpot of your mind, simply take some TalkTalk, season with Springsteen and whisk briskly with dashes of the War On Drugs. Formed in L.A, the band consist of Sam on guitar, Crisanta on bass, Sterling on drums and Matt on vocals and keys. Until recently the band were a three-piece, though Matt proudly announced Sterling as now an official band member, having previously recorded on four album tracks.

They released the album on 23rd February to mounting anticipation. With single ‘Loveless’ released back in September 2016, tantalising listeners, making us wait another 18 months for the full album.

Responsible for the lyrics and undoubtedly a driving force in Lo Moon, Matt is in no doubt about what matters most. “The most important thing is to make sure there’s emotional gravitas to what we’re doing,” he said.

This is evident not least in their soaring crescendos and heartfelt lyrics. Emotional connection forms the crux of their writing process. “I come to the guys and say, here’s this thing and they react to it emotionally. To me there’s a beauty to that and a melancholy to that or a tension to that. It’s just about that feeling and bringing that feeling out in the music.”

Matt explains the process is an interesting journey: “In a song like ‘Loveless’ that’s written over a long period of time, emotions change and those things mean something different after four years removed from a relationship. You have a different look at it, it’s a different landscape, it’s a sweet thing but still I think you have to be connected to it emotionally. That’s how I deal with everything musically and I have to fucking feel like that.”

Matt admits that it is exhausting at times they are prone to wonder if they can’t “just write fun dance party music”, adding, “But we’re not very good at writing that kind of shit anyway.”

Managing emotions, dealing with exhaustion and the stress of the road can be a challenge. Matt shares his coping strategy.

“I meditate. I was doing so well for so long, every day for so long. It dropped off the last four months but I got seven in a row this week so I’m back on the wagon. On the road it helps me a lot.”

Their eponymous debut stands out as an album that should be listened to as a whole. Matt says, “We really love albums, we have a real reverence for them, we love the process, the way they’re made. I think it’s important to have that piece of the puzzle. A lot of bands put out albums but no-one’s consuming them as albums. That’s fine though, it’s worked in our favour to step outside on our first album and say ‘This is what we do.’ No compromise. We just went for it.”

This bold and uncompromising attitude categorises the band and is reflected in Matt’s outlook on the world in general. Mid-interview, a guy strides singing through the bar, past us and into the bathroom, bellowing beautifully a message of love and hope. It was passionate, it was soulful and it was carefree. Matt smiled and listened in blissful surprise, “That’s amazing”. A moment’s reverie and back to Lo Moon’s central mission – to connect.

The bond between Lo Moon and their fans is already strong. Their connection with the audience is palpable and their love of performing shows.

Matt adds, “We love it. I love touring. Opening for a lot of bands last year was a great experience. A lot of our favourite bands, Phoenix, Temples, it was just like one thing after another. We kept finding ourselves in these crazy situations. It’s all weird and wonderful, it is! You know, we came over here and did all those dates with London Grammar. Fans were really supportive, responsive, excited for us. Now going into headlining, taking that experience and learning from it, we feel it’s helped us a lot.”

But it’s not always so easy to connect with the fans, Matt expressed his frustration about the availability of their recent performance on the Jimmy Kimmel and James Corden show, or lack thereof.

“I actually was just going to send someone the video but it’s not online, not anywhere! I was actually really upset by that.” He explains, “Playing the show was… fucking awesome and at the end of the night you get this great product of a professionally shot, professional sounding, great representation of what the band does live. Hopefully we’ll get that out.”

Speaking about where he finds inspiration, Matt gives the story behind the lyrics on ‘All In’ that open with “Silver ridge bends in the dead of night”. He says, “When I first moved to LA, there was this girl that I was kind of pursuing and she lived on ‘Silver Ridge’ and I lived on ‘Lake View’ so we were neighbours and she lived above me and that was where we met, we ended up dating, we’ve been together four years so that’s is a proper love song, full-on invested.”

Other sources of inspiration are more abstract. Matt tells us that the lyric “No relief in silhouettes” on single ‘Loveless’ comes from a more existential place, specifically the philosophy of Albert Camus. A previous incarnation of the band involving Matt and Crisanta was called ‘Stranger’, presumably after Camus’s The Stranger. Philosophical themes also run through the visual narrative of the ‘Loveless’ video. He says, “A lot of it is about life and death and the afterlife. The band dies and we come back together to play so it’s kind of in a dream-state, in a void.”

“I just read Kafka is all the Rage, a memoir about right after the Vietnam war, a memoir about a vet who moves to Greenwich Village in Manhattan and hangs out with all these beatniks and has this little apartment. It’s cool, I really liked it.”

Matt urges us to check out the Bowie reading list: “Definitely, it’s awesome, I’ve read a bunch of them. Recently I finished The Brief Wondrous Life of Oscar Wao. I’ve got my Kindle and I just read on that thing. Before I would go on tour with like ten or 15 books in my bag.”

Communication is everything to Lo Moon and obscurity can be off-putting. Talking about experimental fiction, Matt exclaims, “Yeah I read this George Saunders book, Lincoln in the Bardo, it’s horrible! I like his other writing but I couldn’t make sense of this book. The writing was so hard to follow, I made it to the end but, I could tell you what I think the book was about but I don’t know what it was actually about.”

Lo Moon are driven by a desire to communicate and to connect. They are determined to do it in their own way and on their own terms. As they move into their second album, they plan to continue to leave traces of music, whetting our appetites, tantalizing until we are desperate for the full album.

“Moving forward I’m really into, these days, now the album’s out and we’re moving into album two, just putting out stuff as we go along, leaving little traces of music. I think it’s important so fans can stick with the band. The only way is to stay connected. It’s not about social media, it’s about here’s what we’re saying and here’s the music.”

Asked whether they would like to soundtrack a film, Matt’s response was definitive, “Yes! Yes. Very interested. No plans yet. God I hope so.” When asked his advice for the students at Manchester Met or any aspiring musicians, his message was simple, “Just keep going. Have fun. Meditate.”