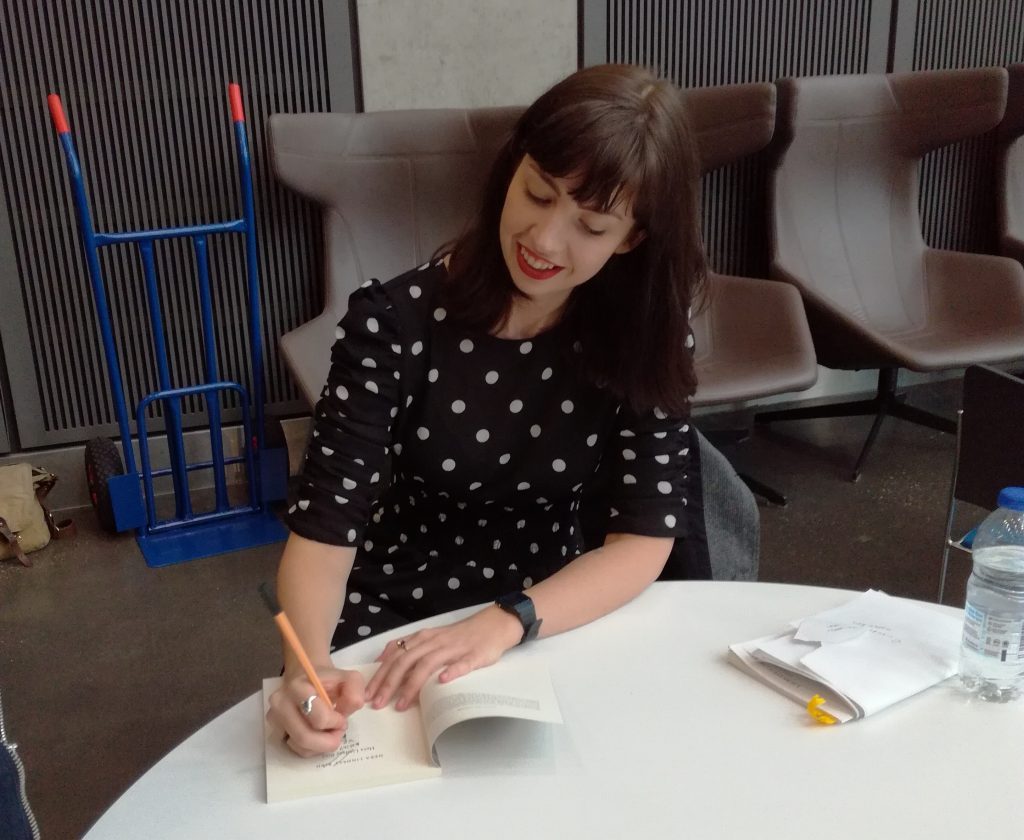 Manchester Writing School hosted a reading by the widely acclaimed and popular New Zealand poet Hera Lindsay Bird on Monday, whose poems ‘Keats is Dead So Fuck Me From Behind’ and ‘Monica’ went viral.

The event, organised by Manager of the Writing School James Draper and Manchester Literature Festival’s Matthew Frost, also featured readings by three poets who are all current students at the Writing School. Darcy Gillham, an undergraduate who received glowing praise from Nikolai Duffy, the event host. Darcy read a selection of poems on the theme of sexual fluidity and desire.

Grace Atkinson, a current MFA Creative Writing student, read a selection of her work, which probes into the world of social media in a curious and refreshing manner. The poems mostly restrict themselves to accurate description, like the early Imagism of William Carlos Williams or the traditional Japanese Haiku, but instead of simple images of nature or the domestic, we have images of throwaway language. There’s a great tension and humour in her writing which comes from this objective manner as applied to the absurdities of Instagram and Facebook cultures.

Kim Moore, a prize-winning poet and current PhD student, read a selection from her work in progress All the Men I never Married, a poetic record of acts of everyday sexism. Her work seeks to play the line between the event and the non-event, the moment when it can’t quite be decided whether something meaningful or wrong had taken place. Kim’s poems are full of warmth as well as scrutiny. The project is reminiscent in scope and aim to Claudia Rankine’s Citizen (2014) yet refrain from that book’s prosaic experimentation in favour of a quiet, sympathetic lyric voice more in line with the Sharon Olds of Stag’s Leap (2012).

Hera’s poetry seems to straddle a hinterland between much popular young internet-based performance poetry and the North American tradition of the intelligent yet hilarious urban aesthetes of ‘the New York School’. She’s a very exciting figure in our generation’s global poetry scene writing with a seemingly unified ease about anything from the Italian Renaissance to last night’s pizza, last night’s sex or the doomed nature of the human desire for meaningful relationships.

Her work can be said to be a kind of performance in itself, a very intelligent trapeze act. She totally occupies the line between a profound lyric impulse and a wry, long-winded pessimistic prose. Interviewing her later, she identified these two forces herself as sincerity and irony.

Bird acknowledged the influence of Frank O’Hara as a key figure in her reading life, commenting: “It’s his quick emotional turns. Even reading Ashbery and whoever, no one surprises me as much as O’Hara does. You just kind of get flipped in this weird, beautiful, emotional New York tumble dryer.” This excited shifting between emotional states and subject matter is a quality clearly on show in Bird’s recent pamphlet Pamper Me to Hell and Back (Smith|Doorstop, 2017).

Bird was selected by Carol Ann Duffy, Creative Director at the Writing School and Poet Laureate, as one of four poets to be published by The Poetry Business this year. When asked what her aim is in a poem, she replied, “My poems usually start from a point of unresolvable tension or a question that can’t be answered. Something that can’t be addressed in any easy kind of way so the poem has to come in and do the heavy lifting for it. I think that’s one of the only things that sets poetry apart from other mediums.”

On future plans, Bird mentioned a break from poetry. She said, “Sometimes you’ve just got to wait for more shit to happen to you, especially if you write very personal poetry. I watch Survivor and just watch my boyfriend play video games – I have a very uninteresting life. But I’d like to do some fiction writing, because that was always my first love before poetry was. I kind of ended up getting extremely side-tracked. I’d love to do TV. That’s where I find the most interesting writing going on at the moment.”

Her reading went down a storm, with well over a 100 guests in attendance. Bird read memorable poems including ‘Pyramid Scheme’, ‘I am so in love with you I want to lie down in the middle of a major public intersection and cry’ and a long piece she identified as “Renaissance fan fiction”, mulling over the nature of Leonardo Da Vinci’s genius in the wildly whimsical and slipshod style of many young amatuer writers.

Each poem was read with a great performative confidence and style, perfectly suited to the material. Bird acknowledged the influence of British comic Stuart Lee and his mastery of the long painful joke. This is a core element in her writing as she slips between romantic sentiment and an absurd, nervous stream of overly logical and verbose language that amounts to a hilarious and weird kind of music of thought. Her poems are as beautiful as they are crooked.