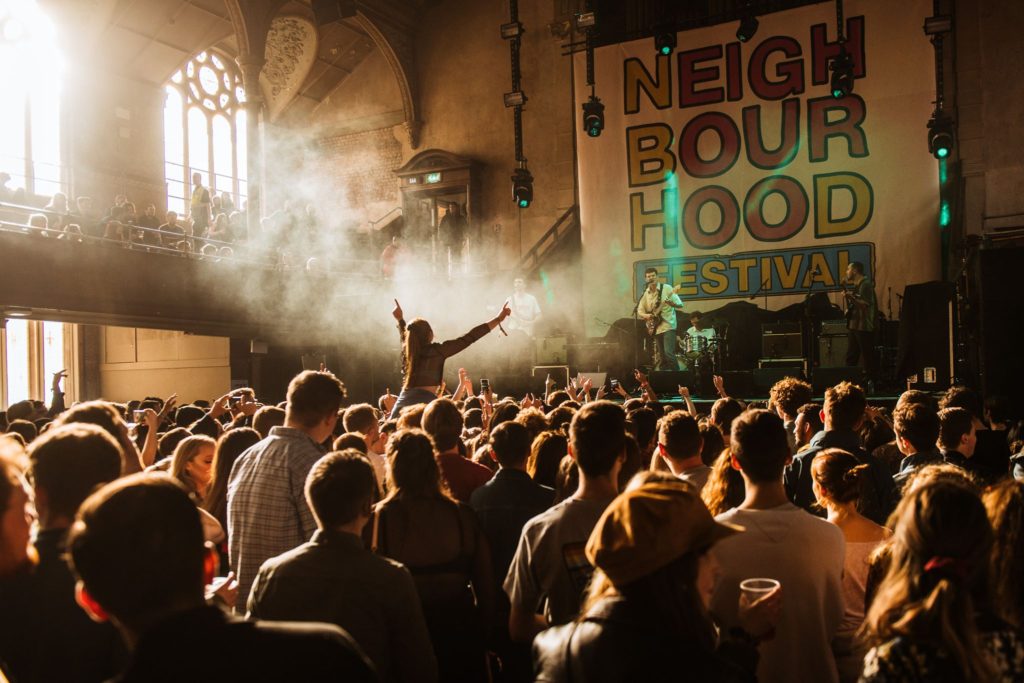 Neighbourhood Festival returned to the streets of Manchester with a bang. From the outset, the local festival was guaranteed to be a hit, selling out for the third year running. Boasting 13 venues based in the city centre, from the intimate Deaf Institute with a 260 capacity to the grand and ornate Albert Hall, holding a whopping 2,290.

This year was particularly advantageous for discovering new gems such as Cleopatrick and Elli Ingram, as well as revisiting old favourites such as Everything Everything, Sundara Karma and The Magic Gang. Neighbourhood showcased an equally impressive range of acts, catering to audiences of all tastes.

Before Sam Fender could take to the stage at the 02 Academy 1, we were treated to a DJ set by Katie Owen. The room was quickly packed and high with anticipation. She attempted to warm up the crowds with hits such as ‘Jean Genie’ by David Bowie and ‘I’m Coming Out’ by Diana Ross. Sadly, however, her set was sadly not appreciated by all. Despite some members of the audience dancing excitedly, others couldn’t help but make their impatience known by shouting “We want Sam!”

As soon as Fender stepped onto the stage, a roar of applause echoed around the room. The audience comprised of fans of all ages, immediately proving he isn’t just another teen heart-throb in skinny jeans – he has recognised talent. He opened the show with the guitar heavy ‘Millennial’. The crowd were interacting with him off the bat, waving and singing along. Drew Michael’s hair theatrically mirrored the high energy performance, bouncing around as he crashed on every drum and cymbal. By the end of the opening song, the band were exchanging cheeky knowing smiles – they may have only just started out, but as far as they are concerned, it would seem, their work is already a success.

Hits such as ‘Greasy Spoon’ and ‘Dead Boys’, combined with Fender’s announcement of a new EP, added to the potent excitement. Sam Fender and his band have mastered both rock’n’roll energy and soft lyrical poetics, showcased by Fender’s solo finale performance of ‘Leave Fast’. If success was measured by the number of guitars used by a band in a set, this band would clearly be up there with an impressive 6. Plus, with an already sold-out set at Soup Kitchen next month, Manchester is all too receptive to their snowballing success.

Before festival veterans Sundara Karma could follow Sam Fender on the 02 Academy 1 stage, the high-energy Mancunian crowd made their presence known by moshing to Joy Division’s ‘Love Will Tear Us Apart’ as Katie Owen dived back in with the classics. Sundara Karma emerged in co-ordinated animal print outfits, which foreshadowed the wildness of what was to come. They opened with ‘A Young Understanding’, which was received well. Throughout the set, frontman Oscar Pollock made a lovely habit of checking up on everyone and making sure that everyone looked after each other, showing that kindness and compassion are at the core of the Sundara Karma mythos. They treated the audience to their newest songs ‘One Last Night on This Earth’ and ‘Illusions’, as well as their tried and tested favourites such as ‘She Said’ and ‘Happy Family’. Once the set had finished and the cool air came flooding in, they thanked everyone for coming. The pleasure, however, was clearly all the fans’.

Dressed in white and black and soon to be read all over, The Pale White share some similarities with a newspaper if their Neighbourhood Festival set at The Deaf Institute is anything to go by. Before the set could begin, the band teased the audience with a few bars of ‘That Dress’ in soundcheck. The show then kicked off with thumping drums which quickly warmed up the crowd with ‘Turn It Around’. Throughout their set, the band used the small space to their advantage by bouncing and lifting their guitars up for full effect, successfully contributing to the growing energy in the room. The audience was also treated to a new song, ‘Medicine’, a dark and moody number set for inclusion on their forthcoming EP, Take Me To The Strange. They closed the set with the well-known ‘End of Time’. Despite the drummer knocking over a speaker as he jumped off the stage on a high of adrenaline, the damage was minimal with no audience injuries, and further added to the characteristic, unexpected nature of a Pale White show. They’ve promised to tour again soon, and the audience will doubtlessly make sure to hold them to that.

Elli Ingram took to the stage in The Pink Room at the new venue YES. She easily made herself at home on the stage, dressing appropriately for her opening song ‘Wild West’ in a pink cowgirl-style dress. Her band consisted of an intriguing trifecta of guitar, drums and saxophone. From her song ‘Moonlight’, characterised by pounding drums and catchy lyrics, to her self-proclaimed ‘cheesiest song’, the beautiful ‘Rocket’, her 30-minute set was crammed with her distinct sound. Technical difficulties are never ideal in any situation, but Ingram handled them like a champ. She even went so far as to entertain the audience by asking them if they wanted to hear a joke and performed an impromptu version of ‘We Will Rock You’ while the issues were being resolved, her bubbly personality setting her apart from other artists at this formative stage in her career. After a short delay, ‘Better Alone’ marked the end of her set, and the audience’s enthusiasm was encapsulated by a group of ladies at the front of the venue raising their glasses and clapping before the song had even finished, for which they were labelled ‘legends’ by Ingram. Great things are happening for this Amy Winehouse-meets-R&B artist.

Surprise addition, The Blinders, who recently debuted their first album at FOPP, were next to follow Elli Ingram at  YES and offered a different experience entirely. With a skyrocketing growth over the last year, it was no wonder that the room filled up fast. The audience quickly received a flavour of what was yet to come, with the familiar ‘Free The Slave’ kicking off the electric set. As frontman Thomas Haywood’s voice filled the room, he didn’t disappoint, with his characteristic black markings painted on his face, paying homage to their successful debut album ‘Columbia’. ‘Gotta Get Through’ encouraged the necessary formation of a mosh pit, proving that despite the soft pink decor of the venue, The Blinders’ gritty and primal atmosphere can’t be diminished. During ‘Hate Song’, Haywood, in true punk spirit, threw water at the audience, but this wasn’t enough to quench their fiery thirst. ‘Et Tu’ and ‘Brave New World’ were faced with equal intensity, but the finale of ‘Brutus’ was crowning moment. Within these 4 minutes of pure chaos, a girl climbed onto the stage only to launch herself off it, and another two people crowd surfed across the tiny venue around the growing circle pit, where people lost their shoes as they were enthusiastically hoisted up by their comrades in spectatorship. As if that wasn’t enough, Haywood then entered the audience, upping the frenzy to dizzying heights. This was certainly an experience that nobody in attendance will forget.

Everything Everything was the obvious choice for the headline act tasked with closing the festival at the Albert Hall. They embody the success an indie band can hope to attain, and do not disappoint. The venue was full to the brim and the set was one of non-stop dancing, the stage lights and mirror ball creating a stellar backdrop for the audience’s insatiable energy. With a setlist featuring hits such as ‘Night of the Long Knives’, ‘Regret’ and ‘Can’t Do’, there was never a lull in enthusiasm. During ‘A Fever Dream’, the Hall was transformed into the night sky, with the mirror ball and audience members’ phone lights imitating stars, adding to the magical atmosphere of the set, while frontman Jonathan Higgs holding the impressive high note in ‘Good Shot, Good Soldier’ to perfection marked another unforgettable moment. Finishing at 10 o’clock, the audience weren’t ready for their set to be over, leaving the band with no choice but to return to the stage for an encore of ‘Desire’, ‘Distant Past’ and ‘Reptiles’. Higgs was charismatic as usual, punching and raising his hands in the air to further enthral the audience. The band worked in effortless harmony, owning the stage in their own distinct way, clearly demonstrating the difference between beginners and experienced artists. While the instrumentals were at times overly loud, leaving it difficult to hear the vocals in some songs, on the whole, if the reaction of the audience during the set is anything to go by, these Manchester natives have done themselves proud and will no doubt be welcomed back with open arms.

Before the day had even finished, spectators were commenting that it was the best year yet. However, given how the organisers have managed to consistently outdo themselves, we can only expect that next year will be even better.