You are here: Home / Creative / Manchester / News / Review / Reading Life After Death: An Afternoon of Translation and Polish Poetry 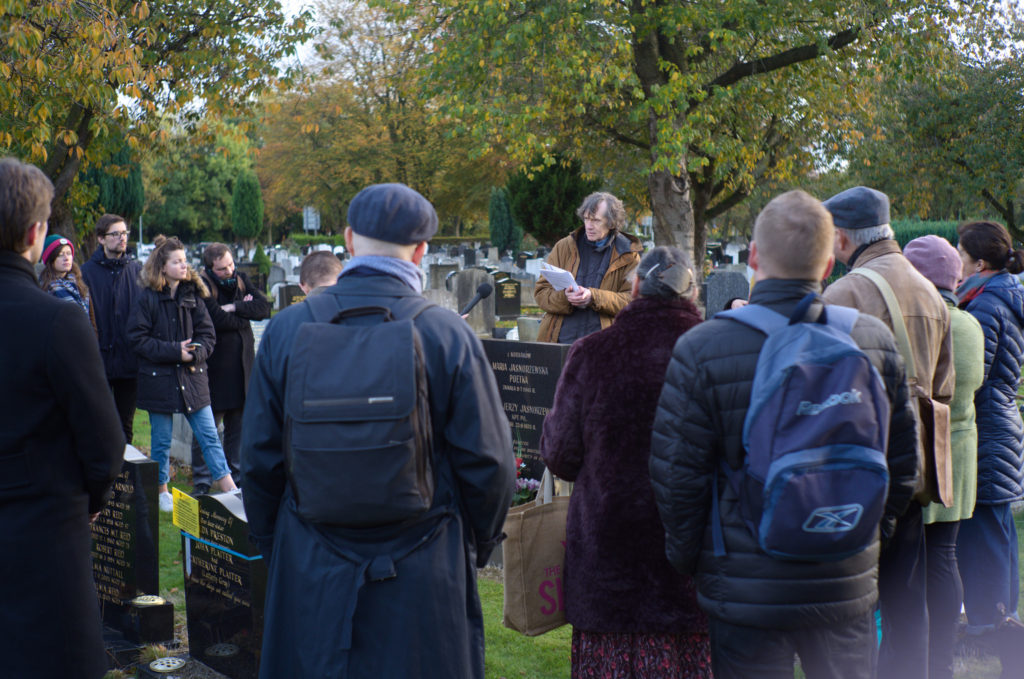 Poets, translators, academics and the public gathered at Manchester’s Southern Cemetery for a tour of some of Manchester’s most notable deceased, in celebration of the life and works of Polish poet and playwright Maria Pawlikowska-Jasnorzewska.

Maria Pawlikowska-Jasnorzewska was born in 1945 in Krakow, and was known as the Polish Sappho and one of the most prolific writers in Poland. Renowned for fearlessly tackling taboos such as abortion, incest and death, Pawlikowska-Jasnorzewska was considered the ‘queen of lyrical poetry’ during Poland’s interwar period. She was first published in 1922 for Blue Almosnds, and continued to publish collections such as Pink Magic, and plays such as A Woman of Wonder.

Manchester Green Badge Tour Guide Emma Fox kicked off the event with her information-packed tour of the cemetery, which opened in 1879.

“We’re going to be looking at the graves of notable people,” said Fox, who has been doing tours of the cemetery for eight years. “We’re going to see who she shares her ground with on this tour and I think that’s quite special.” 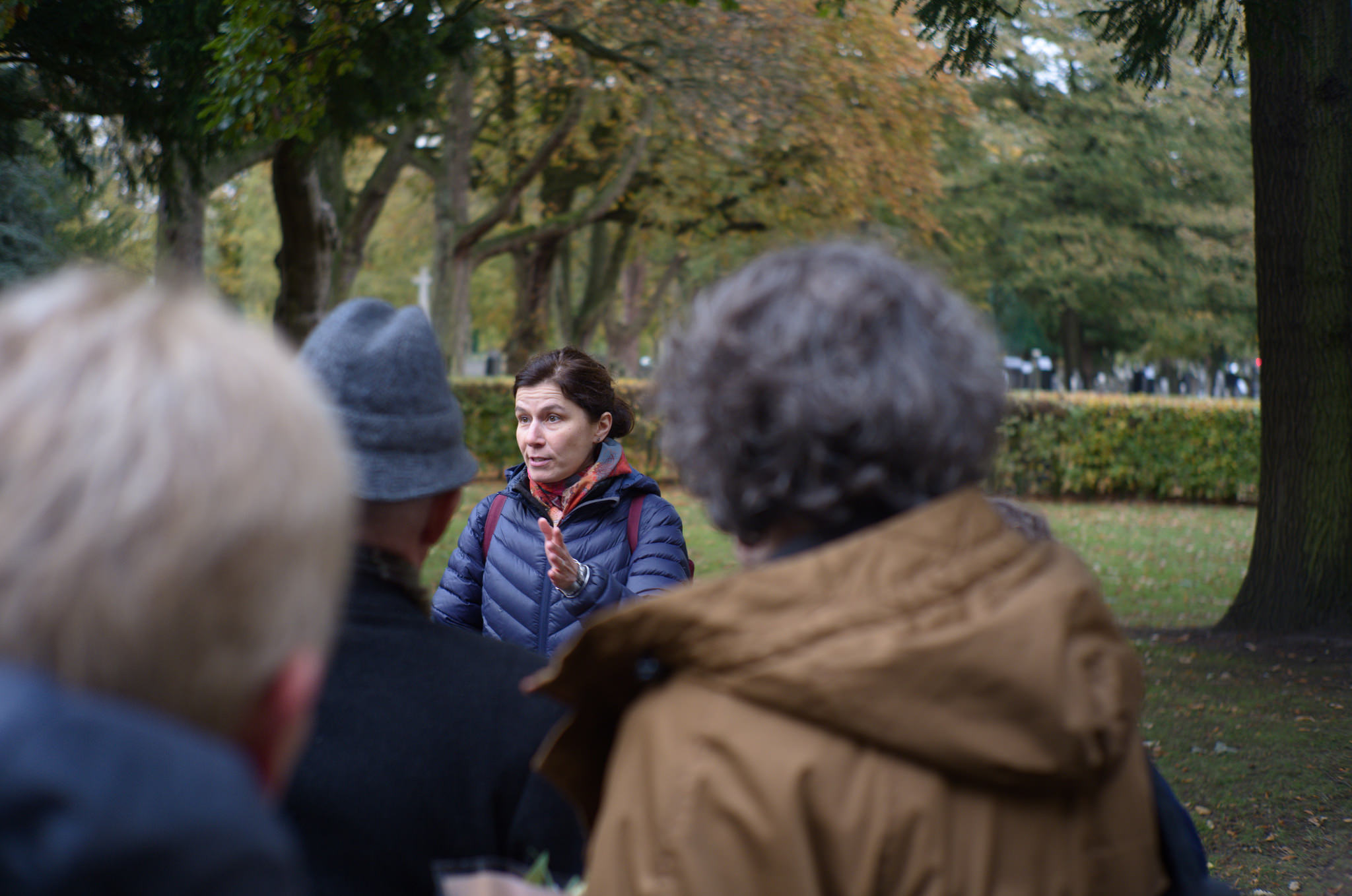 Fox guided the group from grave to grave, beginning with Sir John Alcock who, with his comrade Authur Brown, was the first person to fly across the Atlantic, taking 16 hours in total and, astoundingly, using a plane with an open cockpit.

Fox continued to take us through the graves of John Ryland, Laurence Lowry and Michael Elliot, founder of the Royal Exchange Theatre, while she relayed each story of the dead. Many of these stories were funny, touching, and a wonderful insight into the private histories of each person, including Jerome Caminada, described by Fox as “Manchester’s real-life Sherlock Holmes,” who once hid in a piano to catch a thief, and Antonio Valvono, who saved the ice cream by patenting the ice cream cone.

One of Fox’s  most poignant stories was of Sir Matt Busby, who managed Manchester United between 1945 and 1969, his team nicknamed ‘The Busby Babes’.  Fox told us how Busby was mistakenly noted as a ‘fruit boiler’ rather than a footballer, due to his thick, Scottish accent.

By the time the tour had reached Maria Pawlikowska-Jasnorzewska’s grave, where the tour was taken over by translators Barbara Bogoczek and Tony Howard, a sense of community had grown between those in attendance and, though the purpose was to celebrate the life of Maria, the afternoon also became a celebration of her afterlife, which she shares with those that Fox introduced to us, as well as the hundreds of thousands of other people buried in the cemetery.

Barbara Bogoczek is a Polish translator and interpreter based in London. She works in literature, theatre, film and music. Bogoczekhas has been reading Pawlikowska-Jasnorzewskasince since she was young, and her major translations (with Howard) include Tadeusz Różewicz’s Mother Departs and the poetry and fiction of Ewa Lipska.

Tony Howard is Professor of English at Warwick University. He is the author of Women as Hamlet and is Principal Investigator of the Multicultural Shakespeare Project.

“It shows you can live without air,” Bogoczek and Howard began, as both translators read Pawlikowska-Jasnorzewska’s poetry in both Polish and English, starting with the 1926 poem ‘Love’.

Pointing out a small slate that rested on the poet’s grave, Howard went on to explain how Pawlikowska-Jasnorzewska was buried without a gravestone, but that perhaps the slate, which was adorned with almost illegible gold words, had been laid there by someone close to the poet. 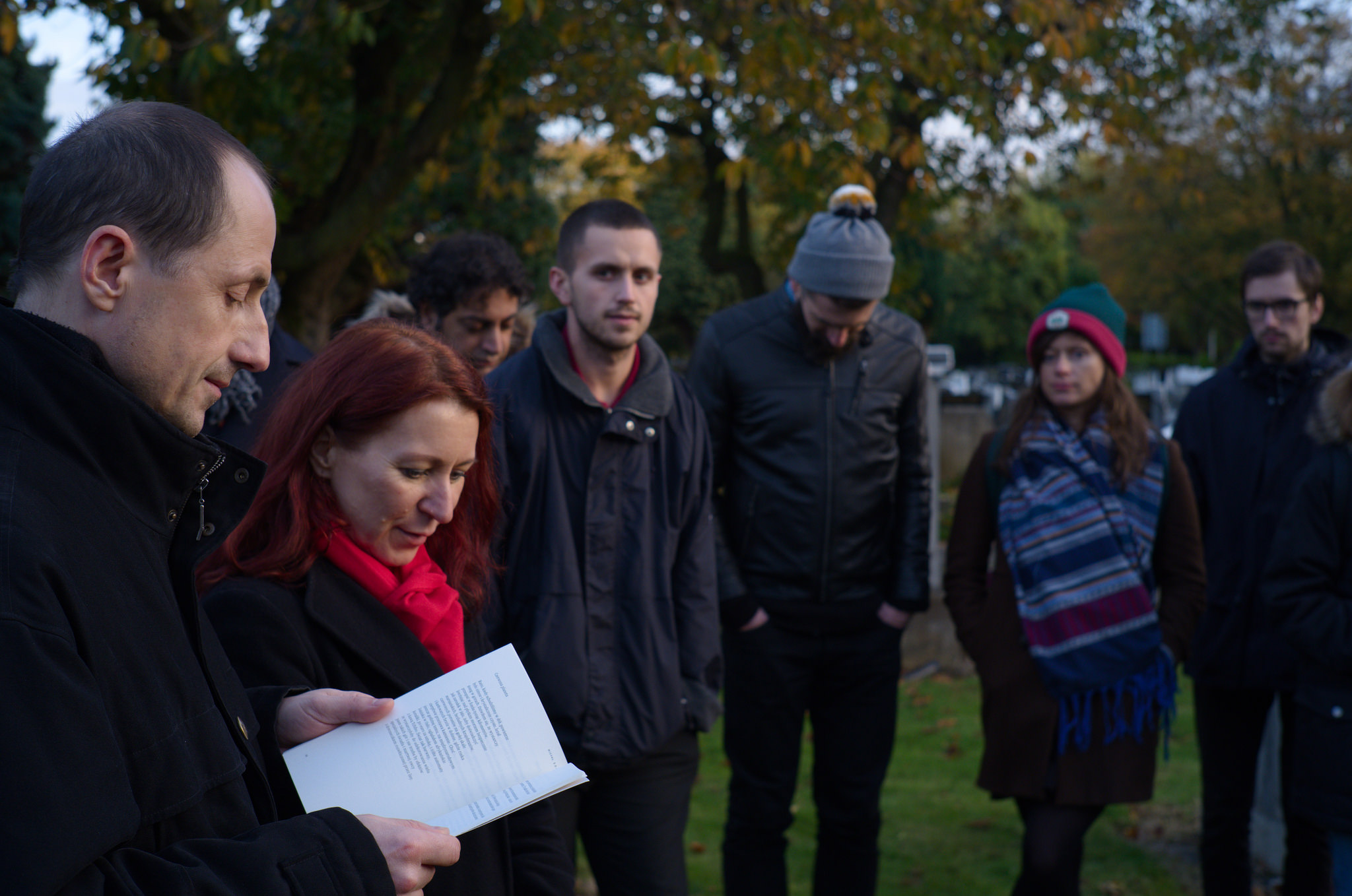 “We worked out that it was probably not a message from the tenant,” Howard laughed. “It was probably a quotation and, indeed, it is a quotation from a poem called ‘Without You’. We decided that, since we were going to have such an extraordinary occasion, thanks for everybody here, […] we wanted to make a translation of that poem as a gift for today.”

With that, Howard read ‘Without You’, a poem written after the break up of Pawlikowska-Jasnorzewska’s second marriage (“it’s boring here without you, boring as hell”), but which seemed to become a sort of message from beyond the grave: “yet the world ended, cant you get it into your head, the world is gone and I wont re-create it.”

Having the poem translated especially for the occasion made the event feel incredibly special, with the group able to share a sort of intimacy with the poet through her words.

Pawlikowska-Jasnorzewska was a prolific writer in Poland, yet, despite moving to Manchester in 1939 as a war refugee, she remains little known in England.

“We want to make it a known thing that Maria is a British poet as well as Polish, but we would like everyone to know that she is a Manchester poet,” said Bogoczek. “She was here during the Manchester blitz and she wrote a whole series of poems like ‘A Cup of Tea’ that deals with her sense of what Britishness is.”

Here, Howard read ‘A Cup of Tea’, a poem that beautifully encapsulates the poet’s intrigue in the British attitude towards war and destruction (“hardened by the cold and tough as the seagulls”), while signalling the importance of small pleasures in times of struggle: “I raise a toast to you with a cup of tea”.

The event finished with a reading by Tania Hershman, a poet, writer, teacher and editor based in Manchester, and the Writer in Residence for Manchester’s Southern Cemetery.

Hershman works to tackle the disproportionate reputation of women by finding gravestones that name women that are noted in their own right, and not just as a mother or wife. Through this mission, and thanks to Emma Fox, Hershman found Pawlikowska-Jasnorzewska, the only woman recorded on the cemetery’s list of notable graves.

Hershman was tasked with writing a poetic response to Pawlikowska-Jasnorzewska work, explaining: “I decided I wasn’t going to do a massive amount of research or dig into her life or anything like that, I wanted to see what happens when I let her words percolate around my head, and pick up on some of her themes.”

“Goodness and badness stray from them equality, say the aunts, robust as hens and tough as millet seeds,” Hershman read from her poem ‘The Aunts’, borrowing lines from Pawlikowska-Jasnorzewska’s poems. Hershman’s words have the sternness of a wise aunt yet the curiosity of a child, capturing Pawlikowska-Jasnorzewska’s own playful yet intuitive tone.

“I like to think that she would like this,” finished Hershman, as she speculated on what the Polish Sappho would think of our afternoon if she could see us, “that we’re all stood around here reading her poetry – what more could a writer dream of?”

The next event is the Manchester Writing School series is Writing Place: Creative-Critical Conversations: ‘More than 100 Stories: A Collaboration,’ taking place on 8 November, 2018.