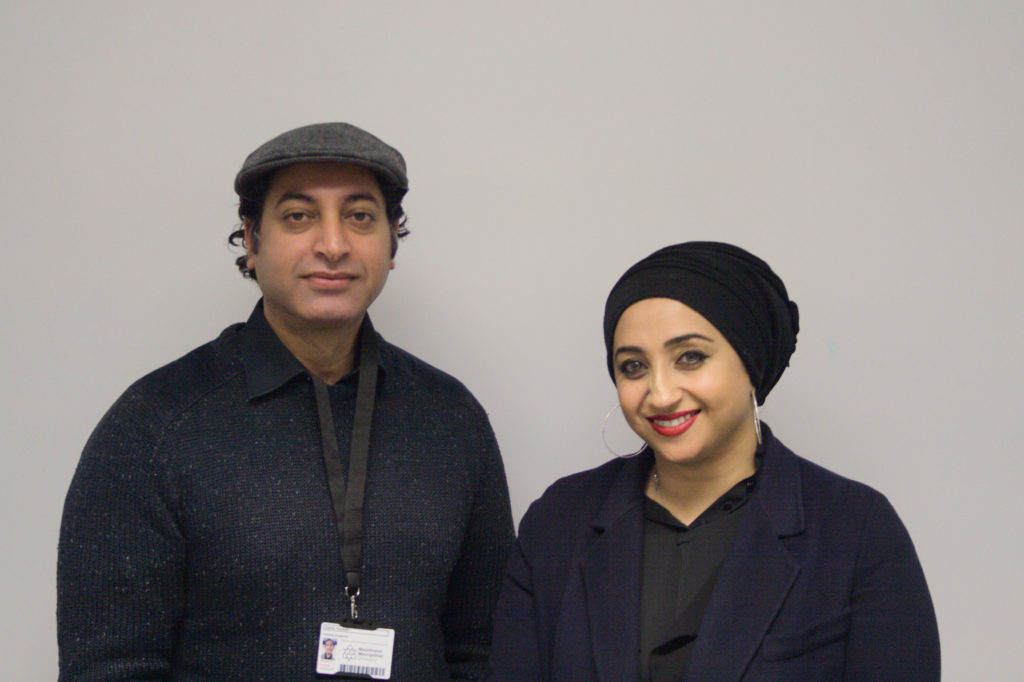 Former Manchester Metropolitan University student, Hafsah Aneela Bashir, returned to the university this week, to share poems from her new book The Celox and the Clot, in partnership with the Manchester Writing School.

Hafsah held the audience’s undivided attention as she read a range of tragic, funny, nostalgic and empowering poems, beginning her talk with tales from her childhood.

Speaking in conversation with her editor Zahid Hussain, Hafsah recalled the racism her father faced as an immigrant Muslim man in a predominantly white Britain, and how her mother would make trays of red roast chicken because “the way to white people’s hearts is to feed them Indian food”.

Hafsah shared her poem ‘Cumin Seeds’, inspired from her experiences of walking through the marketplace as a child. It is rich with amazing imagery of the Asian culture as well as some stanzas being lyrics from songs Hafsah grew up listening to, which she beautifully sang aloud to the audience.

Hafsah went on to reveal the influences of her family on her work, explaining that patience and gratitude are two virtues she learned from one of her aunties. She said, “The reason why that was so important coming from her was because at the age of 36 she went into hospital and they overdosed what they were supposed to give her, and she ended up with amnesia which then turned into full blown dementia. But every time you went and met her, the things she would remind you of… and she would say this over and over again was صبر (patience) and شکرگزاری (gratitude).”

She read her poem titled ‘Rani’, translating to queen, which was written about and for her beloved Auntie. It presented bitter-sweet anecdotes of her Auntie’s time in the hospital, dealing with her dementia.

Hussain encouraged Hafsah to delve deeper into her writing process asking: “When you write a poem, does the title come first? Does a line come first? Is it the image? When do you commit to it?”

Hafsah answered: “I know this sounds really cliche, but it’s almost as if you wait for a muse. Something comes and it comes at the most oddest of times, like I can be driving along the motorway and I will know I have to stop the car on the hard shoulder and write these two things down,” which prompted nods of agreement from fellow writers in the audience.

Hafsah’s poetry explored modern affairs and injustices happening in today’s world and she described the middle portion of her book to be very much more political than the rest.

Her poem ‘I Will Tell God Everything’, came as a result of her going to the Turkish/Syrian boarder in 2014 and came third in the poetry competition Palestine Verses that same year. It was inspired by the images of the aftermath from bombings in Syria that Hafsah saw and ends on a very harrowing last line: ‘but I found Baba’s feet, and put them together like shoes.’ She said, “The reason why that poem ends the way it does is because one of the images was just literally a pair of feet with a white label tagged to it.”

Throughout the talk, Hafsah reflected on this past year and what it means to really be an individual. She spoke about shedding expectations, and undoing the effects of them, that people in her community have built up for women. She said, “Being a daughter-in-law, I was a daughter-in-law for 25 years, you are judged by those round rotis (chapatis). It might seem like it’s just a little thing but actually your worth is judged by how round and how thin you can make those rotis.”

Hafsah captures the idea of gender roles and expectations of the genders in Asian communities in her poem ‘Aloo Paratha’. The session ended on a final reading of the last poem in Hafsah’s book, ‘Brown Bodies’.