Factory 251 nightclub has had its licence suspended after up to eight bouncers were filmed repeatedly attacking two young men outside the venue on Princess Street in the early hours of Sunday morning.

St Helens Rugby player Joe Sharratt, 18, suffered a bleed on the brain and was knocked unconscious by the bouncers. Sharratt’s friend, Leon Cooper, 18, was also involved in the attack, and was repeatedly punched by the door staff.

Manchester City Council Councillor Pat Karney, tweeted: “An emergency Licensing Committee will be held Wednesday to review the license. The club owners will be summoned in. We are working closely with GMP.”

The club’s licence has now been suspended following this emergency meeting, while a full review by Manchester City Council and Greater Manchester Police is carried out.

In a statement published on Facebook, Factory acknowledge support of the investigation and add that they did not contest the decision to have its license suspended, and that they respect the decision by the police and council. They go on to say that they strongly condemn the actions of the door staff involved in the incident and they “wish Joe Sharatt and Leon Cooper a speedy recovery”. 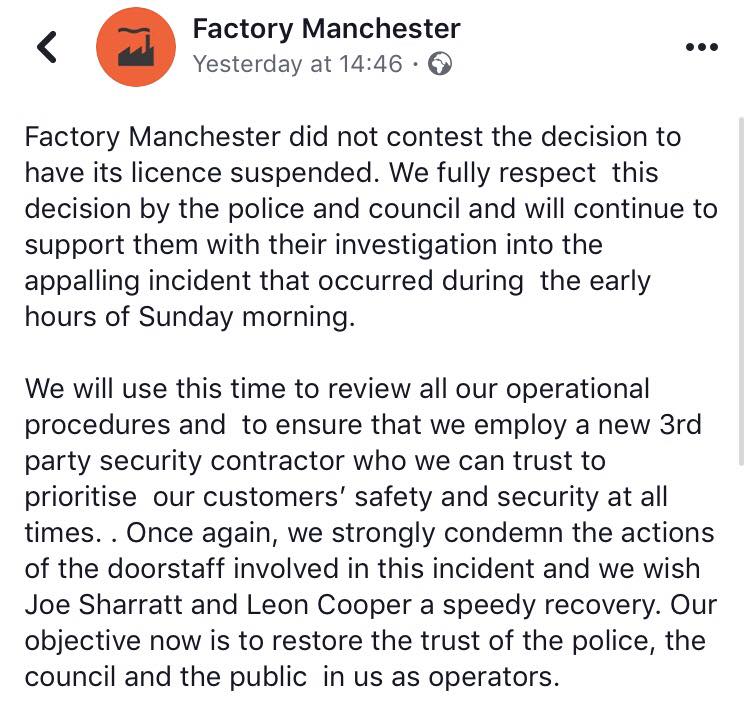 The bouncers in question were not hired directly by Factory, rather through a contract with an agency, Professional Security. Factory has terminated their contract with the agency and all eight men have been sacked.

Manchester City Council has launched an investigation into the incident has confirmed that they are holding an emergency licensing meeting to discuss the actions to take with the club. This meeting decides whether Factory’s licence will be modified, or stripped from them completely, which will close the club down.

Karney added: “The licensing committee has a wide range of powers and sanctions it can utilise to protect the public, up to and including the temporary or permanent revocation of a venue’s licence. Any action the council takes on Wednesday will precede a full review into the venue’s licence which will take place within 28 working days.”

Police launch investigation after video emerges of bouncers attacking men https://t.co/eY5z94yazO Myself and my fellow councillors have received lots of concern about this serious incident.A major investigation will take place with GMP. Not acceptable in our city.

Factory’s official statement said: “Our staff at Factory are employed by a third-party security contractor – we have immediately terminated the service contract with the door security company regardless of the outcome of any police investigation and will be requesting ourselves that the Security Industry Authority reviews the incident in full.

“Having viewed both the CCTV footage and the video circulating on social media, we can only say that we are shocked by what we have seen. We will also be getting in touch with the young man involved and we sincerely hope that he will make a speedy recovery.”

Greater Manchester Police Officer, Alan Isherwood, said that the force had “serious concerns” about the “extreme violence” in the footage. Isherwood added, “It’s easy for the premises to put it down to the door staff but its abundantly clear that there was a huge lack of duty of care.”

Over the last 12 months, there were 34 assault crimes at Factory, some of which included the door staff. However, the club only reported four of them.

On the night of this particular incident, Factory did not report the scenes to 999.

Sacha Lord, night time economist advisor, has also spoken out on the incident. He said: “It was the right decision for Factory not to contest the suspension.” He believed that the violence witnessed were “by no means represent greater Manchester”. He added, “Door staff are here to protect us on a night out. We Will not accept the actions of thugs that we witnessed during the weekend. I hope GMP take further action in prosecuting the individuals involved.”

Fantastic to see such a quick and effective response from @ManCityCouncil @gmpolice. Thanks @patkarney @RabnawazA … these mindless thugs are the ones who are supposed to be protecting us… https://t.co/fwV3afzYG3