Speaking before the event, Antony told Humanity Hallows, “This conference is about memory of the Holocaust in Europe. During the day, we will be looking at such issues as the current refugee crisis and hoping that, by looking at memories of the Holocaust, we can develop a deeper understanding.”

Antony and Ursula introduced the day with a preliminary talk on the continuing relevence of the Holocaust to contemporary history and philosophy in Europe. Antony also stressed the recent post-colonial ‘turn’ in Holocaust studies which looks at its impact in the wider world. He then introduced the first speaker, Professor of Modern History at Royal Holloway, University of London, Dan Stone. Dan’s presentation, chaired by Reader in History at UoM Dr Jean-Marc Dreyfus, looked at how a better understanding of the current refugee crisis can be developed by exploring it through memories of the Holocaust. 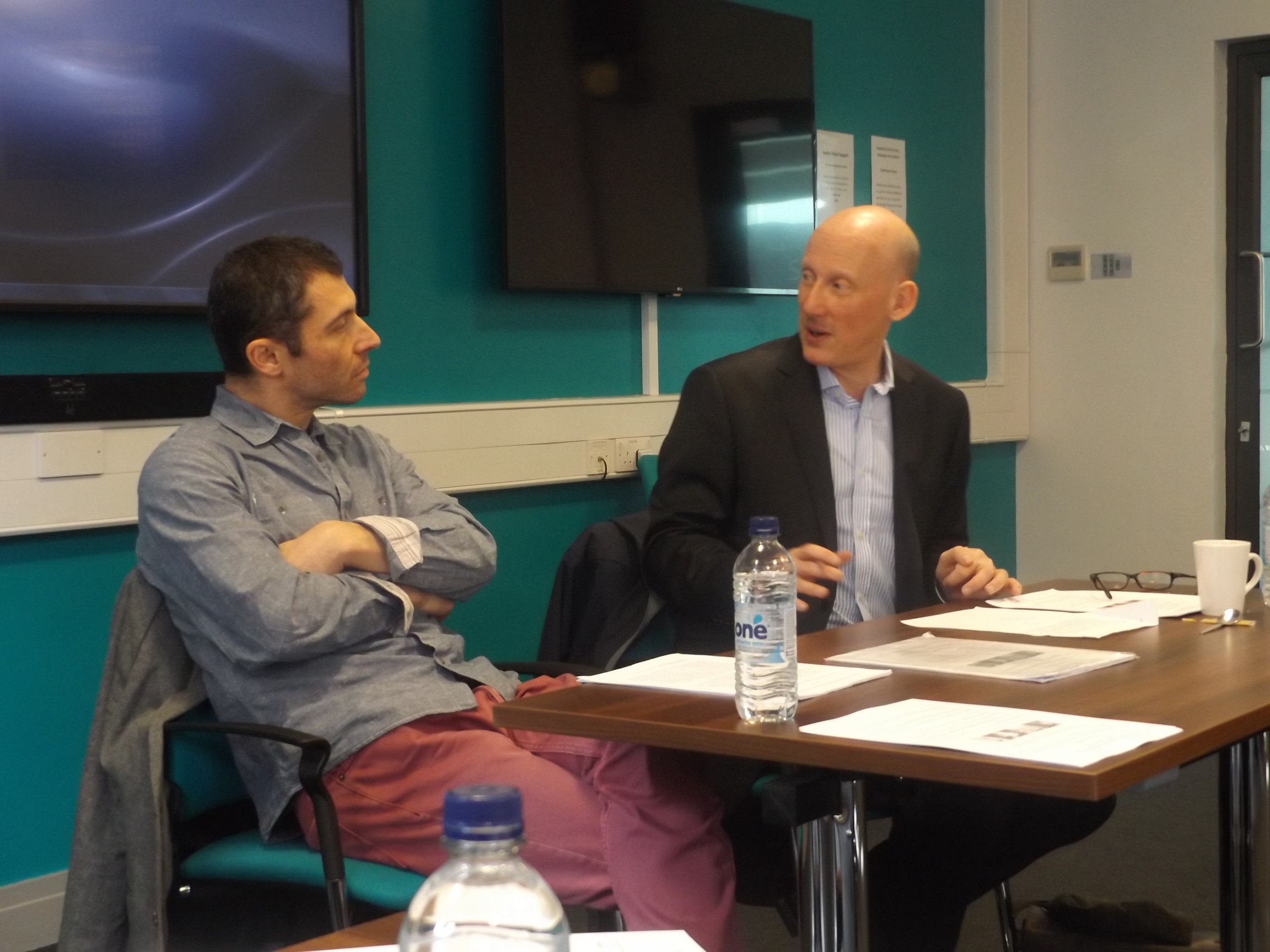 Dan talked about how the dehumanisation of Syrian refugees, referred to as ‘swarms’ by David Cameron and shown dead on the beach in many national newspapers, is reminiscent of the dehumanisation of the Jews who were forced to flee Nazism during the Second World War. Referring to the writings of Polish-American Historian Jan Gross, he went on to explain how the attitudes of many countries towards incoming refugees, for example in Eastern Europe, are still shaped by the aftermath of the war and the struggle to come to terms with past events. Dan said, “Eastern Europe is yet to come to terms with it’s murderous past.”

Referring to Germany’s decision to open its borders to 1 million Syrians, Dan also discussed Angela Merkel’s reluctance to contravene the UN Refugee Convention drawn up in 1951 just after the war.

Following Dan, Manchester Met PhD research student Sam Stuart-Booth gave a presentation entitled ‘Kulka and Photography: The (Im)Possibility of History’. Sam’s talk explored the writing of Israeli Historian Otto Dov Kulka who spent time in the Birkenau concentration camp during the war. Kulka’s memoir Landscape of the Metropolis of Death includes fragments of his memories of the war, depictions of dreams and photographs. Sam explained how, when looking at his work, Kulka’s readers will often project their own interpretation onto the photographs according to their own memories and knowledge of the Holocaust. He said, “The picture doesn’t distort the narrative we construct about the past. The narrative that we construct about the past distorts the picture.”

He added, “A photograph has three meanings: the one it had, the one it currently has and the infinite amount of possible future readings.”

The third presentation of the event was given by Professor of French at the University of Leeds Max Silverman. Max talked about the four year project he has been working on with colleague Griselda Pollock entitled ‘Concentrationary Arts’, inspired by the 1946 work of David Russet L’Univers Concentrationaire. Again, Max looked at the dehumanisation of refugees and other minority groups in contemporary society linking them to the war’s concentration camp prisoners, the camps’ legacy still lingering even in the 21st century. Max said, “The camps represent the extreme form of disfiguring the human.”

After lunch, Senior Lecturer in German Studies at UoM Dr Cathy Gelbin looked at the Jews who became involved in Communism from the 1920s to the 1940s with particular focus on the Jewish intellectuals and writers who broke the silence surrounding then leader of the Soviet Union Joseph Stalin’s crimes. Looking at the work of writers such as Hannah Arendt and Alice Rühle-Gerstel, Cathy discussed the connections between Hitler and Stalin and the Jews who were “caught in the crossfire” between National Socialism and the Stalinist regime.

Following Cathy, Dr Michelle Magin of UoM discussed her PhD research about Holocaust memorial sites. Memorials dedicated to the victims have become a vital part of Germany’s way of remembering the Holocaust with many more having been built since the 1989 unification of the country. Sites that Michelle discussed included the House of the Wansee Conference, the Memorial to the Murdered Jews of Europe and the Halls of Names and Faces.

The final speaker of the day was Professor of Contemporary Literature at Royal Holloway Robert Eaglestone. Robert’s presentation focussed on how the Holocaust impacted on and was perceived in the world outside of Europe. He also explored the Holocaust and its impact on Europe and beyond as, not just a historical, but, also, a philosophical event, saying, “As well as being a geographical location, Europe is a philosophical expression, an idea, a series of values.”

He added, “The Holocaust can be seen as revealing what we are really like or shaping what we might be.”

Response to all the speakers on the day was positive with each presentation opening up a dialogue and leading to many thoughts and questions from attendees.