You are here: Home / Culture / Features / News / Review / School of Rock @ Palace Theatre Manchester review – a charming musical we can all learn a lesson from 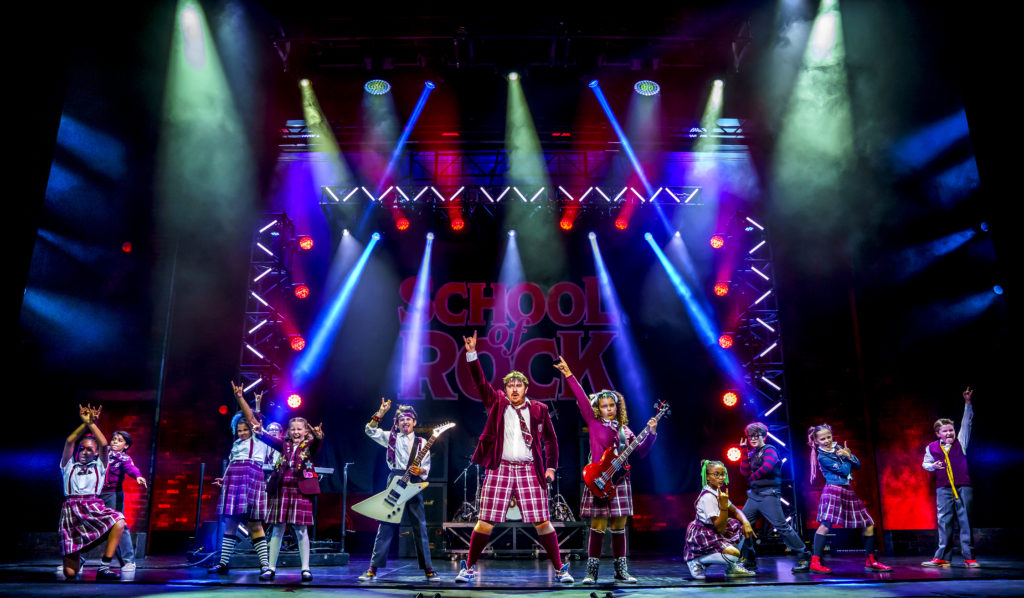 Schools may be closed for the winter holidays, but don’t worry as the School of Rock: The Musical UK tour brings a head-banging, guitar smashing classroom to a theatre near you. Coming from their time on the West End, Andrew Lloyd Webber’s exhilarating production will make anyone happy to be back in the classroom once more.

Based on the 2003 cult classic film, the musical brings the same fun and comedy, paired with a new captivating atmosphere and theatrically. With an adapted book by Julian Fellowes and lyrics from Glenn Slater, the story is transformed for the stage with great success. No matter your age or music taste, you will be rocking out and rolling with laughter in your seat at the Palace Theatre.

Dewey Finn (Jake Sharp/Alex Tomkins) has music in his heart but unfortunately no money in his wallet. Pretending to be his best friend and ex-band member Ned Schneebly (Matthew Rowland), he becomes a supply teacher at the luxurious Horace Green, meeting the seemingly uptight headmistress Rosalie Mullins (Rebecca Lock) and her gifted but suppressed students. Using their hidden musical talents, Dewey prepares them for the Battle of the Bands whilst keeping up his façade, growing unexpectedly attached to his little rock prodigies. Though not qualified to educate, Dewey teaches everyone around him to never let anyone dull your shine and keep your dreams alive, and of course, to always rock on.

The musical was commanded with rockstar energy by Tomkins playing Dewey – in certain performances the character will be played by Sharp. Tomkins was funny and original, clearly being very comfortable with the role and being on stage, never feeling like he’s mimicking Jack Black’s iconic portrayal. On paper, Dewey Finn should be very unlikeable and problematic but there was a charisma that made him engaging, allowing you to fall in love with him and his journey. Plus, with Tomkins’ punky voice and powerful presence, you can’t help but be charmed.

The musical stays very true to the movie, keeping all of the best jokes and favourite songs but Fellowes made it his own by including new humour in his writing. The show was made for fans of the film but that’s not to say they simply copied it like a smart kid’s homework. Little comedic asides and more updated references added a fresh and unique edge to the stage production which was performed impeccably by the cast.

I can’t mention the cast and not talk about the immensely talented child actors playing the students of Horace Green. At the start of the show, we are informed that all of the kids will be playing their instruments live, and this becomes increasingly impressive when you see the insane level of skills. Whether riffing on electrical guitars or riffing with their enchanting vocals, it’s a startling experience. They are the show’s biggest strength, and we are rooting for these mini musicians. Go little rockstars, A+ all round.

With 14 new songs, the cast, both pint-sized and pint drinkers, executed Lloyd Webber’s music with ease. However, the iconic West End composer didn’t quite capture the rock and roll spirit. The musical showcases both operatic songs and fun, high energy performances, which smartly conveys how the prim and proper characters become more carefree as the rock is introduced into Horace Green, but these almost-arias pale compared to the other songs.

Lock’s solo ‘Where Did The Rock Go’, though beautifully sung, had an unsuccessful juxtaposition as she is singing about her secret love for rock in a Broadway ballad. Lloyd Webber’s signature style didn’t fully emulsify with the punk genre as I left the show wanting to listen to Stevie Nicks rather than the cast recording. Saying this, the best music from production are hands down ‘You’re in the Band’, ‘Stick it to the Man’ and the titular song ‘School of Rock’ which make you feel like a rockstar yourself, even if it’s only for a couple of minutes.

In fact, not only did you feel like a rockstar, you felt like you were at a rock concert, something completely unexperienced from a musical before. The show only gets better as it progresses, gathering energy to their big climax, and the audience was loving every second. With stunning sets and hypnotising lighting, you are transported to the Battle of the Bands where you become the School of Rock’s biggest groupie.

But the show somehow balances true punk with true emotions, becoming unexpectedly empowering and poignant. Act One’s ‘If You Would Only Listen’ is an impactful song where the students express how they are stifled creatively by their parent’s expectations, and it is quite beautiful. The musical deals with the theme of parent-child relationships, conveying different kinds of love and how sometimes the grown-up doesn’t always know best. It’s a nice breath of air to see, and a lot of the adults in the audience were clearly affected by this, learning something from the performance. Again, a testament to the talents of the students to be able to do this at such a young age.

Overall, School of Rock: The Musical is a fun night out for everyone. Whether you love the movie or have never seen it. Whether you are a rock and roll fan or can’t stand the stuff. Whether you are still in school or only go for parent’s evening. This production is a must-see.

The musical will be touring the country on a massive UK field trip, so check when class will be in session near you. With punk, personality and poignancy, School of Rock is one school you want to be enrolled in.

Tickets for School of Rock: The Musical at the Palace Theatre Manchester are out now.