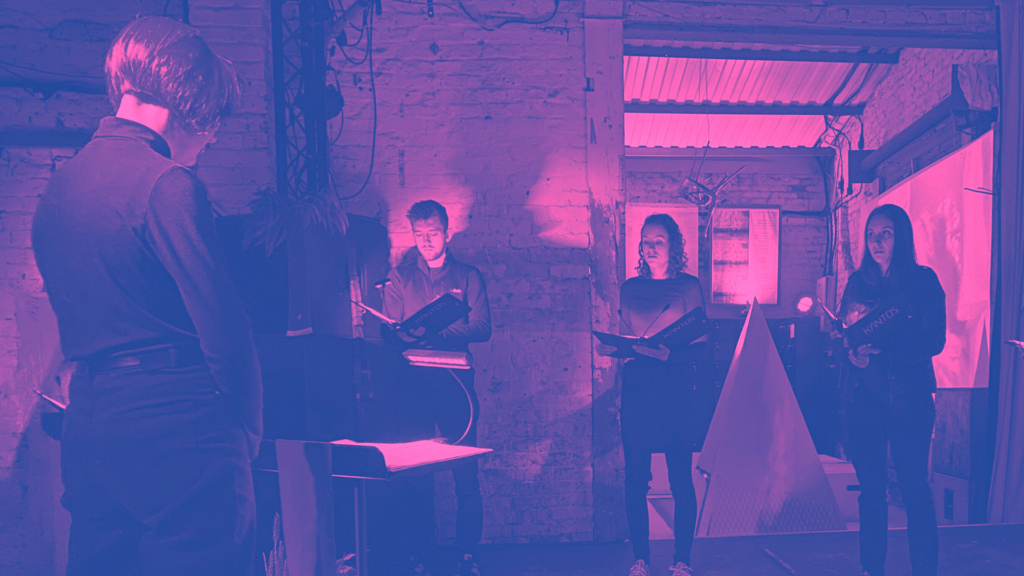 After performing in traditional venues such as Christ Church in Didsbury and St Mary’s Church in Todmorden, Kantos finished their mini-tour of the North West at the more conspicuous venue of The White Hotel. Famous for its peculiar listings that range from sweaty electronic dub nights to chamber choir collectives, the Salford-based nightclub was a surprisingly fitting place to experience the transcendental sounds of some of Manchester’s most gifted vocalists.

Exactly a week before Easter Sunday, Kantos’ performance gave the audience an opportunity to reflect upon the universal values of this festive period. The daunting high ceilings and ornate iconography of a church can sometimes distract people from the relevance of the messages of religious teachings. Huddled in the darkness of The White Hotel – with a stage lit by candlelight, reflecting off the corrugated iron ceiling – the audience could afford to feel closer to the heavenly voices.

The songs themselves took its audience through the entire spectrum of human emotion, guiding them through feelings of love, loss, and grief. Though, whilst inviting us to contemplate inwardly to moments in our own lives, the awe impressed upon the audience by the sheer talent and seamless execution of such complex compositions by the choir, created moments of appreciation for the beauty Kantos delivered to us.

Some people, perhaps most, would hear the words ‘chamber choir’ and not really give a second’s thought to the prospect of going to see what it’s like. But if you give it a chance, and allow yourself to be whipped up in the drama of some of the most exciting compositions, performed by supremely talented singers, then the night Kantos provides becomes an experience that will stay with you forever.

The talent of the composers, conductor and singers is undeniable. If you’re bored of the same old bands and are looking for something new for your ears, heart and soul to feast on, then put Kantos’ next concert date in your diary.

Tickets for Kantos’ next performance at Stoller Hall on the 19th June can be bought here.