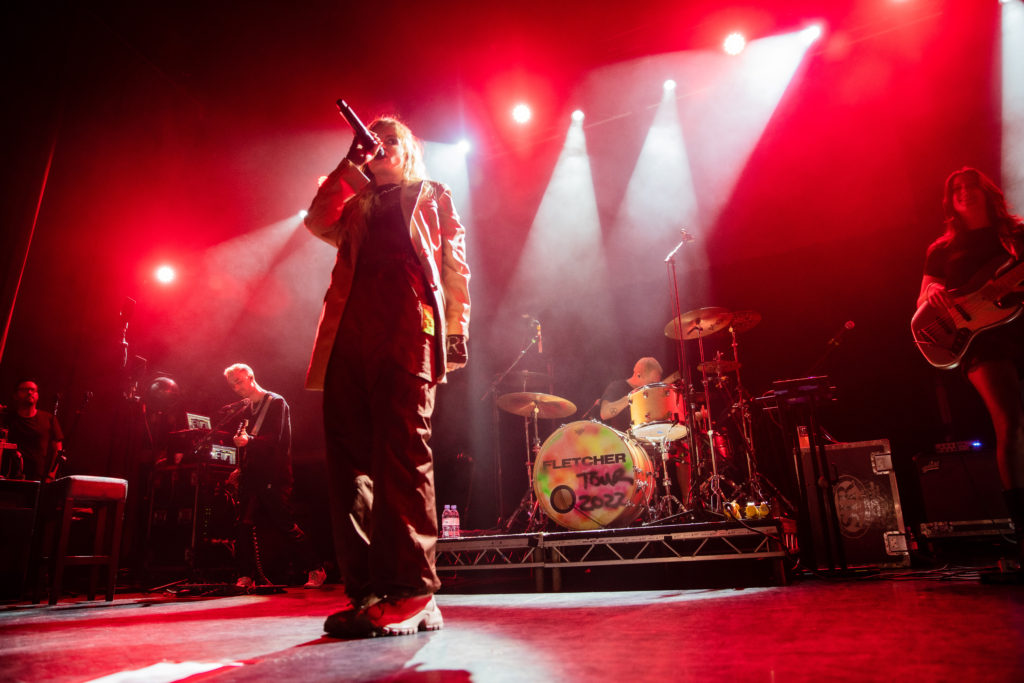 Arriving in Manchester at the O2 Ritz, Cari Fletcher, who goes by FLETCHER, runs on stage wearing neutral tones consisting of a very slick head-to-toe leather outfit. With her sold-out gigs around Europe and a cult-like following of fans, FLETCHER is ecstatic to be back touring after her 2020 dates had been postponed.

The proud queer icon sets the tone by opening with the song ‘girls, girls, girls’. The song pays homage to Katy Perry’s 2008 ‘I Kissed a Girl.’ Fletcher flips it and writes lyrics that resonate with the LGBTQ+ community in a real and authentic way, penning a chorus that better suits the community.

Whether she is crawling on the speaker teasing everyone, strutting confidently or sitting on the edge of the stage connecting with her fans in an intimate, personable way. FLETCHER knows how to work a crowd.

She opens up about her first heartbreak in New York, and how her ex ruined the city for her. This sets up the next song after she says “that no one can really ruin something and you can reclaim that space back for yourself but sometimes we’re petty bitches and I wrote this song for you”. The song ‘Fuck You For Ruining NYC For Me’ starts with the electric guitar but gives acoustic vibes as she sings from a stool. The song is remixed with Billie Eilish’s ‘Happier than ever’, which gets the crowd hysterical, culminating in everyone screaming the lyrics. In the presence of FLETCHER, the hall became a safe space where people could be themselves and shake off their inhibitions unapologetically.

FLETCHER exudes rockstar vibes, catching the bras that people throw at her during her set, and taking a break to sign her fans’ boobs. Wearing a fan’s sunglasses, she seamlessly interacted with the crowd and feeds off their dancing, cheering and screaming. Her musicians got their share of the spotlight too, with insane electric guitar, bass, and drum solos exhibited throughout her show. FLETCHER headbangs with the female bassist and gets on the floor caressing her legs, teasing the crowd who let out a loud roar. Throughout the whole set, she showcased her impressive vocal range and control, and the crowd screamed in awe of her vocal abilities.

FLETCHER ends her set with her hit song and crowd-favourite ‘Bitter”. Of course, her fans are not satisfied and demand an encore. The singer’s encore is a chance for her to show her gratefulness to the fans and for this European tour. Strumming her acoustic guitar, she talks about her songwriting and shares that she has always written songs about other people or her relationships, but never really about herself. The crowd can sense the intimacy that she offers, as she talks about mental health struggles, which resulted in a song she has written for herself, ‘For Cari’.

This unreleased song is vastly different from the rest of her music. The performance is stripped back and simple. The crowd are swaying and holding up their phone lights. Her final song of the night, ‘Healing’, is an atmospheric single, flowing with gentle guitars, warm synth, and soulful lyrics. Signing off, making a heart with her hands and a photo with the crowd, she says thank you as the band plays her and the crowds out. The authenticity and modesty of FLETCHER and her team were so obvious, with the drummer passing his drumsticks to the fans, and the bassist passing a setlist to a lucky person.

FLETCHER’s Manchester show was electric, and it was clear everyone had a great night. She closed by saying she continues to chase her dreams and writing music true to her, the music she needed when she was growing up.

Her fan base continues to grow and her most recent gold-certified hit has amassed over 175 million streams to date. FLETCHER has sold over 500,000 albums and achieved a staggering 1 BILLION global streams. In spite of Simon Cowell’s comments ten years ago on X Factor USA, FLETCHER delivered a show that was far from “boring” and definitely not “forgettable”.

More information and tickets for FLETCHER’s UK Tour Dates can be found here.