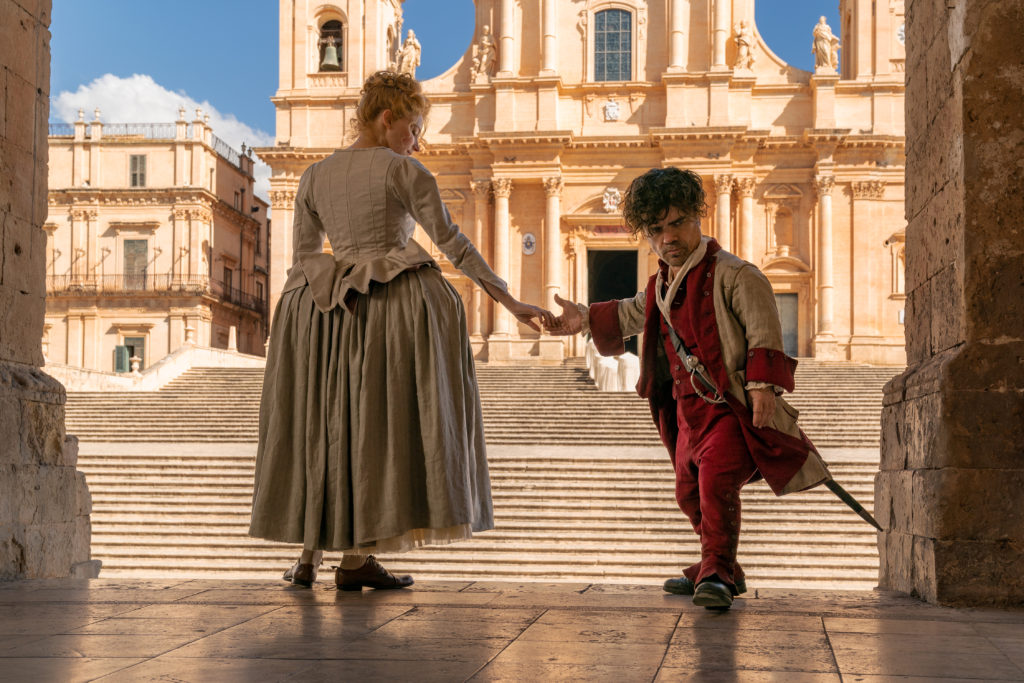 “…an interwoven, melodically driven, representation of how unfortunately the eyes and heart can often want different things.” writes A Bearded Critic.

In a time when we are regularly treated to a plethora of musicals on the silver screen, Cyrano joins the roster with impressive success. Based on the 1897 play by Edmond Rostand and starring Game of Thrones star Peter Dinklage along with Haley Bennett (The Magnificent Seven 2016) and Kelvin Harrison Jr. (It Comes at Night 2017), Cyrano is a musical unlike any other of late.

The film has already been nominated for several awards, including Best Costume Design and it’s not hard to see why. Cyrano is stolen by the stunning set locations, which hold true to the historical era, as well as costumes and make-up; both being a perfect representation of what was all the rage over a hundred years ago.

“A woman like Roxanne wants wit, romance, poetry. I don’t know how to speak romantically!” – Christian

Undoubtedly, Cyrano is for the hopeless romantics out there, and just like the classics ‘Romeo and Juliet’ or ‘West Side Story’, the plot is driven by lovers who are kept apart by means out of their control. Dinklage stars as the titular character, a witty, expert swordsman, and a member of the French resistance, who is madly in love with his childhood friend, Roxanne (Bennett). Unlike the source material whereby Cyrano feels he is unlikely to receive affection back due to having a rather large nose, this adaptation opts to use Dinklage’s dwarfism as the catalyst for his self-doubt of willing affection for others.

Christian, a soldier played by Harrison Jr. unintentionally wedges himself between the two ‘unlikely’ lovers by also falling for the lady himself. In a comical turn of events, Christian acts as an outlet for Cyrano to proclaim his love to Roxanne in secret. This comes about early on after Christian and Roxanne lock eyes across the room and seemingly fall prey to love at first sight. The film follows the three in an interwoven, melodically driven, representation of how unfortunately the eyes and heart can often want different things.

“The world will never accept someone like me and a tall, beautiful woman.” – Cyrano

The dialect is reminiscent of Shakespearean at times, with a rhythmical poem-like flow to the performances. This done poorly could have made the film tiresome and difficult to follow, but the cast does a good job at reacting, as well as ‘overacting’, to the emotional gravity in each scene. My criticism, however, is the awkward sing-speaking that is done early on, which I guess combined with the instrumental background makes it a song, but fails to hit the musical heights I had hoped for. Dinklage is a great actor and can clearly hold a tune together, but sadly just isn’t leading musical material and Harrison Jr. only opens up his pipes for one number throughout. Bennett however does a good job throughout, with some great acting and superb singing.

Cyrano brings a great change of pace to cinemas with a great period piece/musical with some incredible costume design and great directing. It doesn’t however stand up against other recent hit musicals such as In The Heights (2021) or The Greatest Showman (2017) but is still a welcomed film for fans of both Dinklage and historical dramas.

“My dearest friend, I will be very angry with you if you die.” – Roxanne