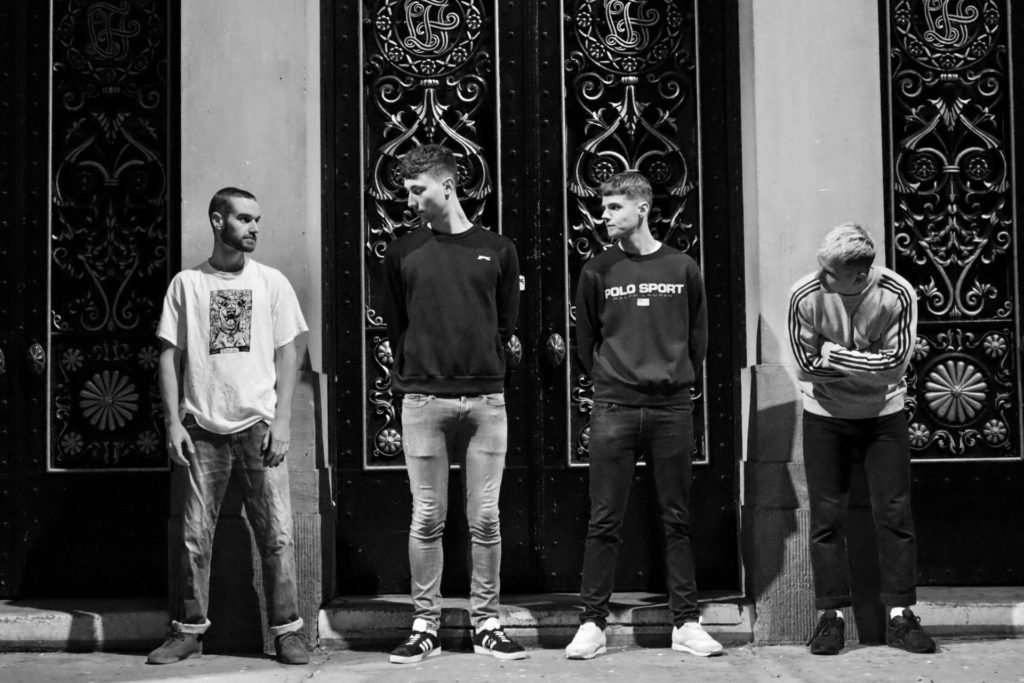 There may be an indisputable level of uncertainty regarding the music industry at the moment, from post-Brexit visa issues to coronavirus already snatching festival season away before the year has begun – but, musicians are still providing hope that when a form of normality resumes, they’ll be armed with a barrage of new content ready to perform at their live shows. Until then, we’ll just have to be content with streaming from the comfort of our homes. Read on for our round-up of the best new tracks to listen to next.

‘Your Fall From Grace’ by Fudge.

Perhaps one of Leeds’ best kept secrets, Fudge., consistently obliterate the airwaves with their revved-up riffs and aggressive vocals – their latest release ‘Your Fall From Grace’, is certainly no different. Described by the band as a “rebellious love song”, it’s soft melodic opening quickly builds, turning into a volatile chorus powered by beating drums. The contrasting tempo is ingeniously carried off throughout. Taken from their forthcoming EP, The Town Hall Session, it was recorded live at Leeds’ Town Hall, which quintessentially captures their raucous live spirit – making it easy to picture their gigs, which are known for their electric atmosphere and wild crowds. Hopefully, this year the band will be given the chance to give the track its live debut – we’ll be keeping our fingers firmly crossed.

Keep up with Fudge.:

Making its world premiere by Steve Lamacq on BBC 6 Music, ‘Narrator’ by Squid and Martha Skye Murphy, it is a heady mash-up of post-punk and mystifying psychedelia. Highly experimental, it contains sections of spoken word and shrieks from Martha Skye Murphy, roaring vocals from Ollie Judge, trippy synth elements, and purposefully chaotic instrumentals. You’d certainly struggle to compare it to anything else on the airwaves. There is, however, a method to the orchestrated madness. Its warped-funk style portrays the track’s central character who has lost all sense of reality and now lives with a perpetual state of confusion. Inspired by the film A Long Day’s Journey into Night (2019), the band has noted that it’s about, “how you can often mould your memories of people to fit a narrative that benefits your ego.” Interestingly, Murphy wanted to reclaim the narrative and play a woman wishing to break free from the submissive role, which men have determined for her. After making the longlist for the BBC Music Sound Of 2020 Poll, it’s clear that Squid is taking each release in their stride. ‘Narrator’ also marks the lead track from their debut album, Bright Green Field, which you can pre-order here. They’re also set to embark on a rescheduled U.K headline in the autumn, you can purchase your tickets here.

‘Panic’ by Millie Manders and The Shutup

A socially-conscious and seethingly high-powered ska-punk track, ‘Panic’ by Millie Manders and The Shutup is reminding us why we should be worried about the destruction of our planet and unsavoury farming techniques. Frontwoman Millie Manders’ powerful vocals implore you to listen to her biting lyrics and are vigorously accompanied by beating drums, and wonderfully gritty riffs. The track is backed up with brass elements, specifically a trumpet and saxophone, which cause you to expect the unexpected. Fully committed to their cause, they’ve made sure that there’s no plastic wrapping on any merchandise or release, as well as releasing limited-edition artwork and clothing to raise money for charity. It’s definitely music that isn’t all bark and no bite. They’ve received a large amount of support from BBC Introducing and Radio X, and are waiting until they can reschedule a full U.K tour – which will undoubtedly see the band carry their crucial message across all corners of the U.K.

Keep up with Millie Manders and the Shutup:

‘Coming of Age’ by Blondes

A band self-described as ‘euphoric indie-pop’, Blondes are sure to boost spirits with their latest track ‘Coming of Age’. It’s a whimsical mix of glittering guitars and perfectly crafted melodies, dripping with synth. The track captures the coming of age in unusual circumstances and the nostalgia that follows once we reach adulthood. Guitarist Alex Davidson, has noted that, “The song itself is a semi-autobiographical story about risking something with the blind hope that it would pay off. In a way, it became our self-fulfilling anthem.” After meeting as freshers at Nottingham University and growing up together, it’s no wonder the personal subject of the track is so relatable. The band has also raised their notoriety when their track ‘Coming of Age’, became a trend on TikTok. Perhaps infamous for giving artists exposure, the app’s granted the track over 2 million streams on Spotify, as well as over 200K monthly listeners on the streaming giant. We can also expect live date announcements soon and a forthcoming EP, so stay tuned for that.

Keep up with Blondes:

‘On The Ropes’ by Apollo Junction

Apollo Junction is riding the wave of the ‘brit-pop revival’ with their latest track, ‘On The Ropes’. Don’t be fooled by the soft melodic synth during the opening. Before you’re even midway through the track, the thunderous drums, nostalgic vocals, and explosive guitars pick up to an eruptive crescendo. Their clear penchant for dramatic choruses and arena-sized hooks, make it easy to see where their befitting ambition is driving them. The Leeds five-piece have received positions on Spotify’s ‘It’s All Good’ and ‘New Noise’ playlists, as well as radio plays by the likes of Chris Hawkins – with a forthcoming sophomore album on the way, it’ll be exciting to see what they have in store for us next.

Keep up with Apollo Junction:

‘Fall To Pieces’ by Pale Waves

Premiered as Annie Mac’s Hottest Record in The World on BBC Radio 1, ‘Fall To Pieces’ by Pale Waves is an indie-pop anthem agonizingly detailing the struggles of a relationship. It’s bolstered further with heartbreaking lyrics and a powerfully all-consuming chorus. It’s beautifully reminiscent of their debut My Mind Make Noises (2018), but with a natural maturity reflecting their progression as artists. Perfectly blending melodic guitars with Heather Baron-Gracie’s soaring vocals throughout, it’s a searingly emotional tribute to removing yourself from a toxic pattern. Baron-Gracie has stated that it’s about, “Going through that constant cycle of arguing and then making up. It can be hard to break that pattern – sometimes you wonder if you ever will.” Marking the final single to be taken from their sophomore album, Who Am I?, it’ll be released on 12, February via Dirty Hit. You can pre-order it here, which will also give you pre-sale access for their forthcoming U.K tour.