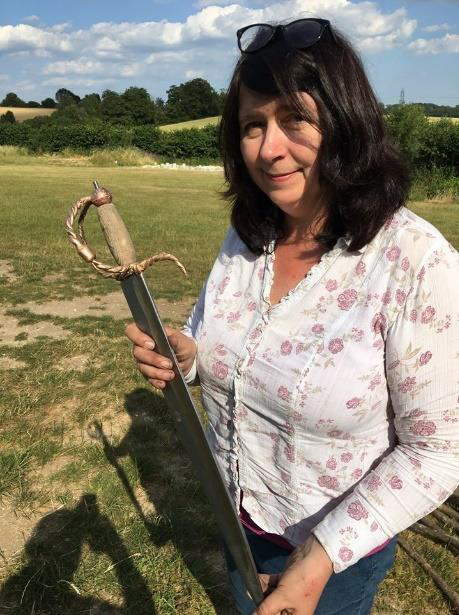 Although Steadman is a writer first and foremost, the historical research she did in preparation for writing The Running Wolf, led her to uncover some previously undiscovered information regarding Jacobite involvement with some key historical figures, including Colonel Henry Villiers.

Villiers was the Governor of Tynemouth Castle in the 1700s, and also one of the justices present at the trial of Hermann Mohll, the protagonist of Steadman’s latest novel. Villiers had royal connections with the Stuarts, which is what makes this potential Jacobite involvement so fascinating. Steadman has published an article on her findings in the Northern History Journal.

Steadman said, “In my head, I had this feeling, a hunch, that the rumours of Jacobite involvement were in fact true, but I didn’t have any evidence. I was going round and round in circles. And then I found it. By exploring Queen Anne’s State Papers and digging around in the National Archives as well as in other local sources, I managed to join the dots and finally prove the connection. So all of my detective work paid off. ”

Steadman completed The Running Wolf as part of her P.h.D studies where she explored “method writing” at the University of Aberdeen. The story follows Hermann Mohll, a master sword maker who left Germany to settle in England in the 1600’s. Mohll was imprisoned in Morpeth Gaol in 1703 and 1704 after he was caught smuggling 1,400 swords into England. He faced being hanged, drawn and quartered for high treason due to his suspected Jacobite involvement.

The Running Wolf, as with many of Steadman’s novels, offers two unique perspectives on the historical events surrounding Mohll’s imprisonment: The perspective of Mohll himself, as well as his jailor, Robert Tipstaff. Mohll appears in third person, while Tipstaff appears in third person. This decision, Steadman said, was due to her need to “convey the distance of time” between the two characters. The novel features dual timelines as well, with Mohll’s story starting in 1687 and working its way to the present, where it converges with Tipstaff’s much shorter timeline, which runs from December 1703. Steadman said she “wanted to make Tipstaff an unreliable narrator. He presents himself as a decent person, but there are little cracks in the armour that are not revealed until later in the text.”

Steadman is interested in the idea of whether “monsters are made or born.” This may be another reason why she often chooses to allow readers into the heads of her antagonists. Steadman’s first novel, Widdershins, was completed as part of her course at Man Met. The novel is based on the events surrounding the 1650 Newcastle witch trials. In the novel, Steadman gave readers access to the witchfinder’s perspective. She wanted to explore characters who, by today’s standards, might be considered villainous. “Was the witchfinder, John Sharpe, a product of his environment?” Steadman said.

In Widdershins, Sharpe makes a decision which ultimately places him on the path toward the man he becomes: a man that does terrible things to innocent people. When discussing his actions in Widdershins, Steadman said, “I had Sharpe start off as a likable boy, but then there is a crossroads. He is given a choice when his father dies. Because his father poisoned his mind against women he decides to live with his uncle. This was a major turning point for him and for everyone else. It was a deliberate choice.”

Writing historical fiction is incredibly challenging. Yet, Steadman tackles not only the research, but also the depiction of these historical events accurately, and without bias. She creates empathetic characters for historical people that may otherwise seem irredeemable. Yes, they are horrible people, but they are still people, and their stories are important. “I wanted people to see through the Witch-Finders eyes,” she said about her antagonist, Sharpe.

Steadman’s stories are brought to life through not only the equally represented perspectives of her characters, but also her in-depth research, and her “method writing” strategies when starting a new project. While writing Widdershins, part of Steadman’s research involved training in tree medicine at Dilston Physics Gardens. The Dilston Physics Gardens were founded by Elaine Perry, a Professor Emeritus of neuroscience at Newcastle University. Steadman said, “I learned to identify different trees and plants and how to harvest the bark and seeds. I also made various remedies, which I inflicted on my unwilling family. The training was really useful because it helped me to see the process of herbalism and better understand my characters.

“Originally, I did it for a bit of fun and a vague idea that it might help. But when I came to do my Ph.D., in fact before I did it, when I was just starting to think about writing The Running Wolf, I thought, I would really like to explore more of this idea of practical research and getting into the skin of characters, ‘method writing’ if you’d like.”

The University of Aberdeen funded Steadman’s research for her novel, The Running Wolf, including a course on swordsmithing at Butser Ancient Farm, where she studied under Rod Hughes, a historical blade maker. As part of her studies, Steadman made her own sword, modeled from 17th century period blades. When recounting her experience, Steadman said, “I was really lucky that there were a lot of smiths on the course, and there were some real sword enthusiasts. I was in a really good place and surrounded by immensely knowledgeable people. I would not have been able to do it without everybody’s help.”

Steadman’s hands-on research has helped her to create vivid, realistic depictions of trades that are no longer widely practiced. “You cannot imagine the heat of the forge until you are in it. You can’t imagine the heat and the sweat, and the salt stinging your eyes. Even the noise gave me that really strong sensory experience,” she said.

Steadman’s experiences at Man Met and The University of Aberdeen have been vital in supporting her to research and write historical fiction, and to uncover the new material she published in the Northern History Journal. “I am incredibly grateful to Man Met and to the University of Aberdeen for the Elphinstone Scholarship, which allowed me to carry out my Ph.D. and research and write The Running Wolf. ”

Currently, Steadman is working on a fourth novel about Grace Darling, the daughter of a Northumberland lighthouse keeper. Darling is a well-known for saving a number of people from the shipwrecked Forfarshire in 1838. Steadman hopes to return to the Farne Islands, where the Forfarshire ran aground, to visit the lighthouse as part of her research for the new novel. She is also considering whether she should stop being such a “landblubber and put to sea.”

The Running Wolf was published in December of 2020 by Impress Books. You can find out more information about the book, Steadman’s “method writing” experiences, or find out how to purchase any of her published novels on her website.