You are here: Home / News / Beat the Blues with Happy News: Uplifting news from Manchester and beyond – June 2021 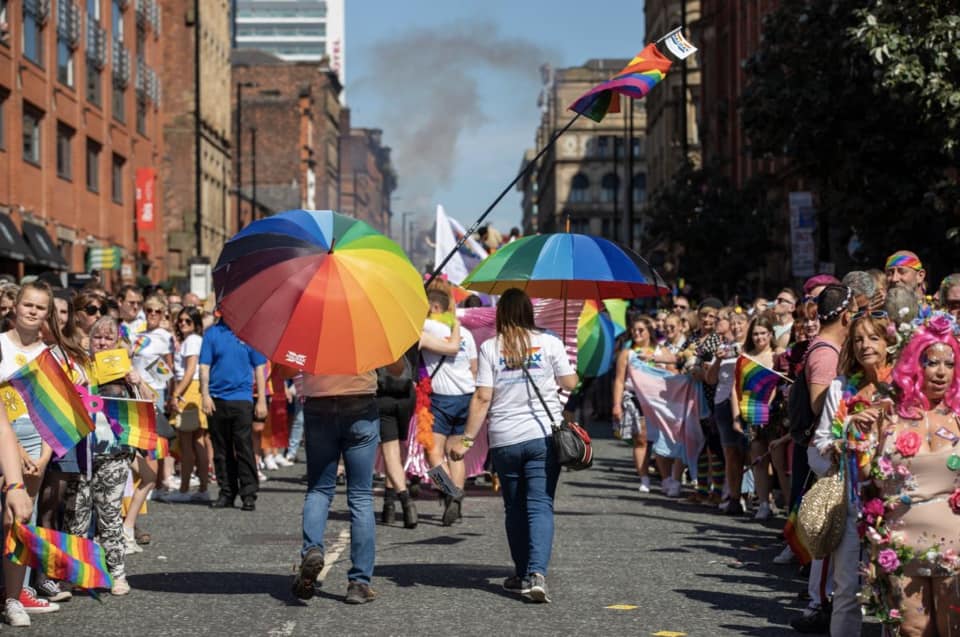 “Try to be a rainbow in someone’s cloud.”

aAh! Magazine columnist Kerry Power reflects on the highlights and positives in this month’s news.

Remembering our darkest day with the Glade of Light

Saturday 22 May, 2021 marked the four year anniversary of the Manchester Arena attack, a dark day where 22 lives were lost. While it may seem odd to begin the Happy News Column with this story, it is also fitting. The strength, resilience, hope, friendship and community that stepped forward in the days that followed were awe-inspiring and beautiful. The survivors, and families of those lost on that day, have shown such dignity and courage, the whole country has watched on in wonderment of their grace.

Memorial services were held across the city on the weekend of 22nd May, including at Manchester Cathedral, where bells were tolled at 22.31 to mark the moment of the attack.

Work has begun on a permanent memorial, The Glade of Light, which will be located within the Medieval Quarter. It has been designed, with the help and support of those who lost loved ones in the attack, to evoke special memories of those lost and as a quiet place of reflection for all who were impacted by the events of May 22, 2017.

Celebrating our LGBTQ plus community

Whilst officially Pride is celebrated in the UK in February (which is also LGBTQ plus history month), many events are held in June (in line with the US) to commemorate the anniversary of the Stonewall Riots in June 1969. These events are a place to celebrate the LGBTQ plus community, highlighting the importance of accepting one another as we are and remembering how damaging homophobia (in all of its forms) can be. There are Pride parades across most cities, some are held in June, but many are held across other months too.

Pride events symbolise how far this community has come since the Stonewall riots, which changed the rights of gay people in many western countries. We have a long way to go before we are a completely inclusive nation, free of bigotry, transphobia and homophobia, yet with educational awareness increasing, most people are coming to realise that love is love, and people should be allowed to identify in any way they chose. We all have the right to be ourselves, be happy and love whoever we love.

Hits Radio helps 2,893 children in their ‘Cash for Kids’ Appeal

The Manchester-based station Hits Radio has raised a phenomenal £2,490,212.34, with the help of local people, to support children who are disadvantaged due to poverty, neglect, illness or additional needs.

The charity held a ‘Cash for Kids’ day in May and is just one part of the initiative which they run yearly. The initiative supports children through grants to provide essentials such as food, heating, toiletries and activity and wellbeing packs.

100% of funds raised goes to children. If you are able to donate, there is still the opportunity to do so here.

With the roadmap to lockdown still firmly on track, this summer may be a brighter one than any of us anticipated. In the final week of May the first of the season’s UK holiday makers set off for some time in the sun, and we’ve been welcomed back into cafes, restaurants, theatres cinemas and bars. By June 21st, depending on official statistics, all of the lockdown restrictions could be lifted.

Demi Lovato opens up about coming out as non-binary

After a tough few years, suffering a stroke, heart attack and a suicide attempt, Demi Lovato has acknowledged their truth by announcing in May that they are non binary on their new podcast 4G with Demi Lovato.

The star who became well known after their song; ‘Sorry Not Sorry,’ had been struggling with their mental health while also struggling to acknowledge their gender identity and has had the realisation that they identify as non binary over the past year and a half.

Demi hopes to support others going through similar journeys, though admits “to not being an expert or a spokesperson” on the podcast. We wish Demi love and strength as they hopefully move towards peace and acceptance of their true self.

“It’s not about where you land, it’s where you fly” 🦋💓 Thank you @GlennonDoyle for coming on #4DwithDemi this week!! Next time you take a buzzfeed quiz, mind sending me the link and we can compare results?? 😂💗

Manchester’s iconic Grade II listed hotel, The Midland has received a £14million revamp. The works include all bedrooms and public areas, a new French restaurant, and a bar.

The hotel first opened its doors in September 1903 and has hosted many famous names from Bobby Charlton to Prince Edward and even infamously refused The Beatles entry to their restaurant due to their inappropriate dress.

As a journalist who takes her job seriously, I decided to stay at the newly refurbished hotel at the end of May so that I could confirm that the rumours are true (okay, so it was for an anniversary, but still!) and I can promise that, should you decide to book a stay, a meal or a glass of fizz at the beautiful Champagne and Cocktail bar – you will not be disappointed.

Aaron Wylie, a bus driver from Nova Scotia, was devasted to learn that his mum, who he hadn’t seen since Christmas 2019 due to Covid restrictions, was terminally ill. As Wylie holds a Class 1 License, he is able to drive a truck and, as a truck driver, he is an essential worker, but could only make the trip to see his mum if he had a job that took him close to where she lives in Saint John, New Brunswick.

Wylie was also limited by a tight budget and limited time off and was devastated by the prospect of not seeing her again. He put a message on social media, offering his services for free, should anyone want to hire him for work so that he’d be able to do just that. He waited, uncertain he would get any response at all and yet was met was an overwhelming response from strangers. The post was shared widely on Facebook as offers of work and financial help rolled in, with one lady even offering to be tested as a liver donor for his mum!

“It’s been an overwhelming response and an emotional one,” Wylie told CBC News. “I was just blown away. These are people I don’t even know.”

Wylie has accepted a trucking job and is awaiting travel clearance from the Canadian Authorities, he’s hoping to get to his mum soon thanks to the kind support of strangers.

If you’ve enjoyed this month’s happy news column, keep an eye out for next month’s instalment. There is so much out there to find joy in! Feel free to share happy stories you have in the comments section and join the conversation over at @aAh_mag