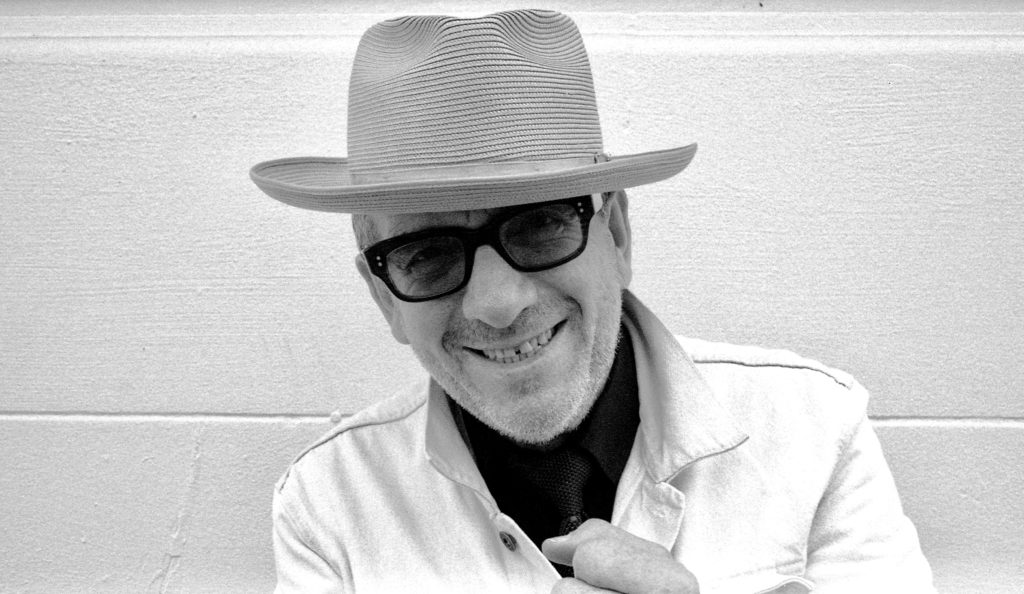 Elvis Costello revisits his 1979 album Armed Forces in a vivid assault of sound and vision. The nine-vinyl set contains B-sides, demos, outtakes and live recordings. There are also new liner notes penned by Costello, facsimiles of handwritten lyrics, as well as rare photos, concert archives and other memorabilia.

It could also have been subtitled ‘the personal is political’, given the recurring theme of global conflict, morphing into domestic discord, and back again.

In ‘Green Shirt’ the object of jealous rage is a newsreader at the time of a military coup. The tattoo-style drumming of Pete Thomas – still a Costello regular – ratchets up the tension. Costello included the song on his aborted Just Trust tour. The line: “She’s picking out names I hope none of them are mine”, took on a different resonance as Covid-19 accelerated its deathly advance.

‘Two Little Hitlers’ describes a relationship heading towards mutual destruction. “Pictures of the merchandise plastered on the wall/ we can look so long as we don’t have to talk at all.” Is this a couple avoiding difficult topics or a populace silenced by totalitarian propaganda?

‘Chemistry Class’ is even more dystopian, with its depiction of a brutalising society: “They chopped you up in butcher’s school/ threw you out of the academy of garbage.” It builds towards a crescendo and closing snarl of: “Are you ready for the final solution?”

‘Party Girl’ is surely one of the greatest (non) love songs in pop history. Its stop-start rhythm was influenced by The Beatles ‘I Want You (She’s So Heavy)’. It ends with the singer protesting: “I could give you anything but time.” Gossip linked it to Bebe Buell (mother of actress Liv Tyler), but Costello later confirmed it was inspired by an art student in Minneapolis.

The album’s big hit was ‘Oliver’s Army.’ Despite alluding to mercenary fighters, imperialism, and refugees, it reached number two in the charts, in March 1979. The Bee Gees and Gloria Gaynor were amongst those who kept it off the number one slot. Pianist Steve Nieve’s melodic ‘borrowing’ of Abba’s ‘Dancing Queen’, no doubt helped ‘Oliver’s Army’ to Gold Disc status – for more than 500,000 sales of the 7″ single.

It can sound overfamiliar on record but still hits home in live performance, especially when performed on acoustic guitar.

Other songs, like ‘Busy Bodies’ and ‘Senior Service’, have dated less well, perhaps because of their over-reliance on puns. “You find out that a wave of her right hand could seem so tidal,” he sings on ‘Busy Bodies’ (I always thought he sang ‘. . . subtitled’ before I saw the printed lyrics). In the song, he critiques the ‘sex, drugs, and rock ’n’ roll’ lifestyle on offer at the time. Some people will complain about anything!

“You can listen to us whiners,” he sneers on ‘Sundays Best’ – which was written with Ian Dury in mind. Costello described it as “an attack on the small-ads page of The News of The World with a big pair of scissors”.

The extra tracks – which help to justify the reissue – include live tracks, a couple of producer Nick Lowe’s songs, and a spookily superb version of, ‘My Funny Valentine’. The lesser-known Costello songs, which must have formed the longlist for the eventual line-up, are here grouped under the heading: Sketches for Emotional Fascism.

Costello even reworked lyrics from some contenders into songs that appeared on later albums – for example, compare ‘Clean Money’ with ‘Love for Tender’, which opens Get Happy (1980).

The live tracks give a taste of the frenetic ‘Buddy Holly on Acid’ Costello of the early years – with an accent that ranges between Liverpool and Rotherhithe.

The Live at Hollywood High 1978 performances are a particular highlight, especially those, like ‘Alison’, which feature Steve Nieve’s elegant piano work. Costello explained to BBC Radio 4’s ‘Mastertapes’ programme that his manager – Jake Riviera – recruited, with financial incentives, the girls who you can hear enthusiastically yelping. “Then they saw us, and they really did start screaming”, Costello joked.

It is also well worth clicking here, to hear the inspirations behind the ‘Armed Forces’ songs – ranging from Bruce Springsteen to Max Wall and Dusty Springfield to the vintage ITV soap opera, ‘Crossroads’ theme tune.

“I just don’t know where to begin”, sang Costello on the opening line of the sublime, ‘Accidents Will Happen.’ It is unlikely that this will be the last reissue of his early albums. But he is also working on new material, including a forthcoming Broadway musical. It is a collaboration with Burt Bacharach, inspired by the film, ‘A Face in the Crowd’ (1957). It proves that 66-year-old Costello has plenty of ammunition left as he continues his march into new creative territory.

Elvis Costello’s latest release is available on all major streaming services, you can listen to the new album on Spotify.

Keep up with Elvis Costello: